When I met Mr Shakespeare.

February 01, 2012
In about 1962 I became the proud owner of a Lambretta scooter.  Dad and I went down to a vendor of pre-owned scooters whose business was on Warwick Rd in the Easton part of Bristol.
The owner of the business had some sort of connection with the Plymouth Brethren -  so that (allegedly) made him more reliable.
The scooter was useful for my work -  I used it to travel the ten or so miles from my home to the Westminster Bank in Chipping Sodbury, Glos where I was a very junior clerk.
I was the last person in the world to have been allowed such a machine as I do not have a mechanical cell in my body.  In those days there were no electric starters for scooters -  and the kick starting could be a pain.  My Lambretta had a two stroke engine, using a mixture of petrol and oil.
Soon after I bought the scooter my Gospel Quartette friend Eric Pavey and I set out for a trip from Bristol to Coventry.  I yet had a “leaner’s licence” but Eric could be my passenger as he had a full licence.
We set out sans maps and travelled through the edge of the Cotswolds.  It was a cold and foggy day.  At a traffic light in Leamington Spa  ( ahem – I meant to write “Royal Leamington Spa”)  I failed and failed again in that process of letting out the clutch and increasing the accelerator to begin traction.  There was a long line of cars behind us, and soon a long line of angry drivers whose way I was blocking.
On arrival in Coventry we explored the Cathedral and then sauntered down to the pedestrian free shopping precinct.
There we happened upon an older gentleman who was taking his rest on a bench.  He was sweet, kind and gentle.  His name was Mr. Shakespeare -  that’s the truth!
Eric and I, being good Plymouth Brethren gave witness to our faith.  It transpired that Mr. Shakespeare was a member of an evangelically minded Church of England parish in Coventry.  He invited us to attend a “house group” meeting that evening, and so we did.  Indeed we not only attended the house group, but were also given lodging for the night.
My memory is a bit imperfect but I think that the Vicar of the Church was our overnight host.  What I remember clearly is that this evangelical parson had a minor obsession with the so-called “Shroud of Turin”.  He believed it to be authentic.
Even then it seemed odd to me that an evangelical parson (evangelicals base their faith on the Bible alone) – should be an advocate for the authenticity of a Roman Catholic relic.
Even then I was sceptical about the “Shroud”, as I am to this day!
But it was an excellent adventure for Eric and me.
The photo’ (below) is of a 1962 Lambretta Li. I suppose that mine looked a bit like this. 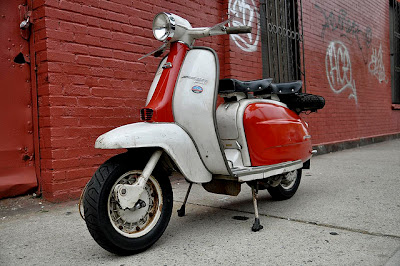 July 05, 2012
Astrid Nicosia was a parishioner when I was the Vicar at St. Christopher’s Episcopal Church in Chicopee, MA. (1980-1984). She, born in Norway, was a delightful, sweet, gracious and deeply intuitive woman. Her husband Dominic Nicosia was born in Sicily.  He was a bit gruff. But he had a nice and wry sense of humour. The Lord alone knows how and when a Norwegian woman would marry a Sicilian man! My beloved mother met Astrid on one of Mum’s visits from the U.K. to the U.S.A. These two fabulous women “hit it off” immediately. Michael and Cindy Tourville also attended St. Christopher’s. They were then a young and fairly newlywed couple, with two young sons.   As it happens, they lived right next door to Dominic and Astrid. Twenty eight years later, Michael Tourville has written an affectionate and moving account of his (and Cindy’s), mysterious and grace-filled encounters with Astrid. It’s a fabulous tale, one that gives me Goosebumps as I remember the fabulous
Read more

Scintillating Scotoma : That's the fancy name for what happened to me after my first Moderna Covid 19 vaccination on 2nd March 2021 Stock photo' I call it the jagged halo effect.   It's a form of migraine -  the less fancy name is Ocular Migraine.  One of the possible side effects of the Moderna Vaccine is headache; which can lead to migraine. I learned this today after an appointment and thorough examination with an Optometrist.  Phew.  What I experienced is one of those "this too shall pass" conditions. I can expect/anticipate a similar condition following my Moderna Vacc #2 on 30th March.   The good news is this. There are no signs of macular degeneration or glaucoma. I do have "mild" cataracts,  but this has been the case for a number of years and I am very far from needing  cataract surgery.  Oh lucky man! But the Scintillating Scotoma effect did bother me, and I am glad that I had my eyes checked today. Thanks to my wonderful Eye/Med insurance via
Read more

March 04, 2022
Povey Prattle is taking a rset. I am doing this because when I transfer  Povey Prattle stuff to Facebook (which is how most of you see it) a photo' of the poet  MickyScottBeyJones often attaches itself to my posting. I've not been able to find a way to delete the story I wrote about Micky very many years ago.  It's one of life's minor annoyances. So I will no longer post on Povey Prattle.  If you are one of the five or six readers or followers of that blog you'll be able to read my nonsense and good sense  on a new blog "More Prattle from Povey" If you follow me on Facebook there is nothing you need to do.  The only difference is that you'll no longer see the confusing photo' of Micky Scott Bey Jones. But do look her up via a web search.  She is a terrific poet.
Read more