March 27, 2010
Yesterday a good  colleague (M.K.)  wrote this on Facebook.  "(I) am going to fast from Facebook through Holy Week. Although I'll miss you in news feed, I'll cherish you in prayer.”I am "with"  my colleague on this. Thus I will take a sabbatical from my blog “Povey Prattle”, and from Facebook until Easter Day 2010  (April 4th)For now I conclude with a “Holy Week” thought from Flannery O’Connor“The truth does not change according to our ability to stomach it.”

For tonight - a wee bit of humour My badge of honour too!

I "lifted" the following from another blog, therefore I decided, out of respect for the author, not to change a word.
Out of the same respect for my friends who are Republicans, I add that I wish that the first sentence made reference to "conservatives" rather than to  "republicans. I recall that many conservative democrats resisted "liberal" civil rights legislation, and that Richard Nixon (with all his many flaws) continued the "liberal" War on Poverty.
Having said that - the following describes my badge of honour.
jmp 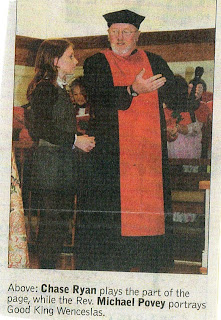 Back in January 2010 I sang and played the part of “Good King Wenceslas” at the All Angels by the Sea (Longboat Key FL) 12th Night concert. Young Chase Ryan was my page.

Her Mum and Dad made sure that I received a copy of our photo’, which had been included in the weekly newspaper: “The Longboat Key Observer”.

As I looked at the photo’ again the other day I noticed that “Good King Wenceslas” was wearing a watch.

That, in the deep sense of the word, is about as anachronistic as could be!

March 22, 2010
Wolfgang Amadeus Mozart (for some reason or other he is always referred to by the three names) wrote what I consider to some of the most sublime melodies which a person could conceive.

If I had to be restricted to one composer it would be Mozart, and if he is not in “heaven” then I don’t want to be there.
(On the other hand, I’ll leave if Richard Wagner is there! - not on account of his music, but because of his vile anti Semitism)

Mozart died at aged 35, just two months after the premiere performance of his “The Magic Flute” (“Die Zauberflote”), the opera which I enjoyed yesterday afternoon. This opera has always been a crowd pleaser with what yesterday’s programme notes called “a combination of low comedy and Masonic-inspired ritual”.

Mozart and his librettist Emanuel Schikander were Masons in the “Free and Accepted” Masonic order which, again according to the programme notes, was “known for their liberal views and feared by autocratic monarchs”.

March 21, 2010
When I was ten years old I was in what Americans would call 5th grade. (In England we started “1st grade” at aged 5.)   Mr. Sidney Richards was my classroom teacher at Eastville Junior Mixed School in the Greenbank/Eastville area of Bristol.
Mr. Richards was also the music teacher for the whole school. His wife was the piano accompanist.  I loved to sing then (as I do now). “Sid” and his wife introduced me to good music.
We learned to sing a vocal arrangement of part of Schubert’s String Quintet in A major, D. 667, ''The Trout''.
We were introduced to the lovely setting of Psalm 23 to the tune “Bothers James’ Air”.  (see http://www.youtube.com/watch?v=JGBXSJqhdBg )
Mr. and Mrs. Richard exposed us to the full range of traditional English folk songs as “discovered” and arranged by Cecil Sharp.
They enabled us to sing music by Mozart and Dvorak.
We sang for the B.B.C.
All this was public education at its very best - enabled by the post World War II socialist governments of …
Post a comment
Read more
More posts