In “modern times” they say that the “Scary Man” will:

I have a few innocent questions.

Wisdom (via my friend D) 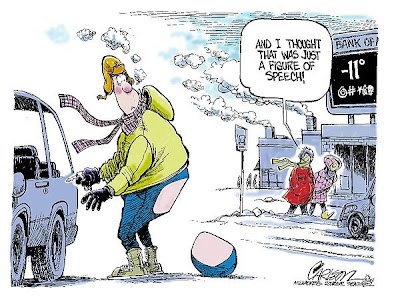 August 05, 2009
August 6th in recent history is the day in 1945 when the U.S. Air Force Bomber “Enola Gay” flew over the Japanese city of Hiroshima, dropping an atomic bomb on to that city.

It is believed that 70,000 people were killed instantly, and another 70,000 died as a later result of the bombing.

We are all of course familiar with photo’s of the atomic bomb cloud.

August 6th in the Christian calendar is known as the Feast of the Transfiguration.

The feast recalls the Gospel stories in which Jesus, with Peter, James and John climbed Mount Tabor, whereupon the face and clothing of Jesus are transformed before the eyes of the disciples: his face shining like the sun and his clothing becoming “dazzling white”.

A little bit later in the story a cloud covers Jesus and a voice announces that he is God’s beloved son.


Ironic, isn’t it, that dazzling light and a cloud are features of both stories?

Here is a story which I have stolen from the blog of my friend, the Revd. Elizabeth Kaeton ("Telling Secrets" is the name of her blog)

A wife was making a breakfast of fried eggs for her husband.

Suddenly, her husband burst into the kitchen.'Careful,' he said, 'CAREFUL!

Put in some more butter! Oh my gosh! You're cooking too many at once. TOO MANY!

Oh my gosh! WHERE are we going to get MORE BUTTER?

They're going to STICK! Careful. CAREFUL! I said be CAREFUL!

You NEVER listen to me when you're cooking! Never!

Turn them! Hurry up! Are you CRAZY? Have you LOST your mind?


The wife stared at him.'What in the world is wrong with you? You think I don't know how to fry a couple of eggs?'

The husband calmly replied, 'I just wanted to show you what it feels like when …
1 comment
Read more

August 03, 2009
Just in case you thought that all Episcopalians were do nothing more than searching the musty closets in our Churches and Parish Halls, to drag out gay and lesbian people and force them to become Priests- it ain’t so!


You won’t read it in the press or see it on fundamentalist blogs/websites - but here is what we are doing these days.


We are studying the Bible.


We are rejoicing when folks who join us, turn to Christ and confess him and Lord and Saviour. (That’s in our Prayer Book you know).

We are trusting God: "Father, Son and Holy Spirit" as the ancient creeds have expressed this.


We are feeding the hungry.


We are working to build houses, clinics, schools in many lands.


We are enabling care, medication, and healing to thousands upon thousands of men, women and children who are HIV + (particularly in Africa).


We are working for racial equality and reconciliation.


We are visiting prisoners and working for their educational and spiritual welfare.


We are helping to take ca…
1 comment
Read more

August 02, 2009
A few weeks ago I was told that I am a bigot. I was told this by a person who was responding to a newspaper article which I had linked to my Facebook page. I have never met my critic, and he has never met me.


I suppose that there are two kinds of bigots.


There are those who have never engaged with or encountered the persons or ideas which they scorn. These bigots have simply absorbed the atmosphere of bigotry in which they live – home, work, church, community, and have never questioned what they have learned. Perhaps this is “a bigotry of ignorance” – rooted in the lack of the ability or desire to challenge what has been learned “by osmosis”, so to speak.


Then there are those who know that there is no evidence to support their bigoted views, and indeed there is much evidence against their beliefs, but choose to hold on to them “come what may”. We could call this “a bigotry of choice”.


As you might imagine, I did not do cartwheels when I was pegged as a bigot.