JOYCE   PHX – MIA – La Quinta Inn
MICHAEL  LBK (preaching) – Interstate 95 – Alligator Alley – La Quinta Inn
JILL Pet-sitting Penne, Ada, and Adelaide
Joyce and Michael – old friends, separate rooms (!), great chance to get “caught up”,  and “do” South Beach.
Be back with you on Monday.  Joyce stays in MIA for a business conference.
Posted by J. Michael Povey at Saturday, June 18, 2011 No comments: Links to this post

On Wednesday 15th I helped to facilitate a Prayer service at Resurrection House (the day shelter for homeless people here in Sarasota).


Thursday 16th saw me presiding and preaching at the weekly communion and healing service at my local church, St. Boniface on Siesta Key, Sarasota, FL.


Today I was at “The Inn at Bay Village” - a rehabilitation  facility for folks who’ve undergone surgeries. There I visited and prayed with three St. Boniface folks who are receiving therapy after their operations (one with a shoulder reconstruction and two with arthritic knee surgeries).


Sunday 19th will see me presiding and preaching at All Angels by the Sea Episcopal Church on Longboat Key, FL in the absence of their Rector, who is on vacation.


It is truly wonderful to be engaged in christian ministry in this the sixth year of my retirement from full time Rector ship.

I've been using Facebook since March.  I find it to be a useful tool, a way of keeping in touch with friends.

But I could not access Facebook today. I began to think that it was "the end of the world".

It took me about three hours and many "tries" before the system was restored.

I felt to be so frustrated.

I believe that it was a very self centered feeling on my part, especially  as I consider the brave souls who live under oppressive regimes, and who rely on Facebook and other social networks as a means to express their longings for political and economic freedoms.

My lack of access to Facebook was no more that a "wee frustration".  Theirs is often a matter of life and death.

Posted by J. Michael Povey at Thursday, June 16, 2011 No comments: Links to this post

I think of myself as a “Povey”.  That was my father’s last name.
His father was also a Povey, but his mother was a Bennett.
My mother was a Finch. But her mother was an Ames.
So I am one fourth Povey, one fourth Bennett, one fourth Ames, and one fourth Finch.  Each is a good English surname.
Since my Dad (Henry John Povey) had no siblings I am much more aware of Mum’s side of the family – the Finches.
Thanks to my first cousin Chris Finch I have been able to enjoy some Finch family photo’s.
In this one (dated to about 1918) you will see my maternal grandparents:  Francis John (Jack) Finch and Kate Ames Finch with their eight children.
My Mum is the young girl on the bottom right of the photo (as you view it).  She was then about five or six years old.
I am so happy to have been able to see this photo’ of my Mum as a wee lass.
I am also glad to be able to see a photo’ of my maternal relatives which was taken some 93 years ago. 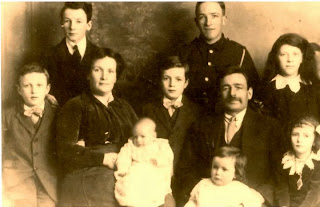 How amazing that I knew many of the family members in this photo’ from circa 1918!
Posted by J. Michael Povey at Wednesday, June 15, 2011 No comments: Links to this post

My mother's birth name was Finch.  She was one of the eight children born to John Francis Finch and Kate Ames (my grandparents).

None of them survive though we are blessed that my Aunt Irene (Parsons) Finch, (who had been married to my maternal Uncle [Walter] Wally) yet lives to bless us with her grace and beauty.

Her younger son, my cousin Chris Finch, is thankfully interested in the genealogy of the Finch family, and he has posted a number of photo's on Facebook.

In the photo' you will see some of the Finch folks when Wally Finch and Irene Parsons were married (1946?).

By then my grandmother Kate Ames Finch had died, my uncle Albert Finch had been killed in the Normandy invasion, [ my brother Martyn and I took our Mum to see her brother's grave in Bayeux, France in 1994], and my aunt Kate Finch had died from tetanus poisoning.

In this wedding photo'  I am on my mother's lap, and my twin sister Elizabeth is being held by the bride, my beloved Aunt Irene. 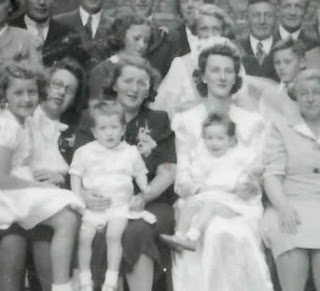 Posted by J. Michael Povey at Tuesday, June 14, 2011 No comments: Links to this post

Five years ago today (June 14th 2006) the Movers came to my home in Medford, MA and packed their truck with all my furniture and other belongings.
It was the last day of my ownership of 520 High St, Medford, MA.
Later that day the new owner did her “walk through”, and declared herself to be satisfied.
My brothers Stephen and Martyn were visiting me from England – having wonderfully decided to be with me at the time of my retirement.
“Homeless” for the while, I stayed that night in a Motel in Bedford, MA, as did Stephen and Martyn.   That evening we drove from Bedford into the North End of Boston and had dinner at “La Famiglia Giorgio”.
The next morning (June 15th 2006) I signed the final papers for the sale of 520 High St, Medford, MA, and then flew down to Sarasota to sign the papers for my purchase of 3901 Glen Oaks Drive, Sarasota, FL.
So I have now been “retired” for five years.  I am “gladder than glad” that I was able to do so at the relatively young age of 62.
These past five years have enabled me to enjoy life as never before. For that I am grateful.
Posted by J. Michael Povey at Monday, June 13, 2011 No comments: Links to this post

The beginning of my sermon this morning at All Angels by the Sea, Longboat Key, FL


Nine days ago I was soaring over the Gulf, just off Anna Maria Island.  I could see all of Anna Maria, some of Longboat Key, and all the way up to our gorgeous Sunshine Skyway Bridge.  My youngest brother was visiting me from England, together with his 15 years old son.  We were para-sailing.  What fun.
I noticed that the cord which tethered us and the parachute to the boat had to be strong enough to bear our weight as we were being hauled in, but light enough not to drag us down as we were sailing.
Para-sailing felt  like soaring on the winds of the Holy Spirit.
And the cord is like the tradition of the church -  light enough to allow the Holy Spirit's freedom, but strong enough so that we are linked to the faith of the Apostles.
Posted by J. Michael Povey at Sunday, June 12, 2011 No comments: Links to this post