COMCAST and a rant. (goody, goody I can rant again)

I have not ranted in the recent months.

I feared that my ranting days were o'er.

Lord above, that would be tragic.


BUT HERE IT IS  ----  A RANT FOR TODAY.
My  basic Cable TV is via Comcast. The monthly fee is absorbed into my condominium assessment because our Condominium Association has a contract with Comcast for basic T.V. service.
Some residents opt to pay more directly to Comcast for additional T.V  features  such as HBO etc., but not I.
I am a basic T.V. kind of guy
BUT I HAVE TO PAY EXTRA TO COMCAST FOR INTERNET SERVICE
I understand the need for this extra charge for Internet, but dammit I cannot fathom why it increases every year.
In 2013 it was $59.44
In 2014 it will be $62.51
I am on automatic bill pay and the locally monopolistic Comcast imposed this increase without a word of explanation. (N.B.  I am not getting any improved services, nor is inflation rampant in the U.S.A. )
What's worse is that Comcast is a communications company, yet there is no way of communicating with them via their website, and asking for an explanation for  their $3.07 per month increase.
Comcast does not give a fig.   For this Company knows that there is no other high speed service in my locality. It's Comcast or nothing,
Yet Repuglicans and Demodrats in the U.S.A,  and sTory-tellers in the U.K., and so called  Liberals in Australia insist that the "free market" will solve all of our fiscal problems.
DAMMIT  there is no such thing as a free market.
All of the national and international markets are slewed by various governments in favour of  greedy and monopolistic companies. That's why my internet service costs have increased this year.
It's
NOTHING TO DO WITH THE FREE MARKET
It's
EVERYTHING TO DO WITH THE CORPORATE STATE
﻿
﻿
﻿

Posted by J. Michael Povey at Saturday, January 11, 2014 No comments: Links to this post

Labels: As in Italian Fascism under Mussolini. so in Western capitalism under Obama, Cameron and Abbott.

My great-niece Olivia tells the truth

My great-niece Olivia is the daughter of my niece Anne and her husband Stuart.

Anne is the youngest daughter of my sister Maureen and her husband Bernard.

Stuart, Anne and Olivia were recently visiting Disneyland from their home in the U.K.

They came over to SRQ to have lunch with me.

Posted by J. Michael Povey at Friday, January 10, 2014 No comments: Links to this post

Stuff you already know (or need to know)

1.  If you leave your home in good time for an appointment, every traffic light is green.

2. If you are running late, every traffic light is red.

3. It is only after you have wound up the electric cord and toted your vacuum cleaner back to its storage place that you notice the places you did not vacuum.

4.The use of directionals/blinkers on your car is not to be recommended.

Should you use them it is more than likely that your tyres/tires will immediately deflate, your air bags deploy, and your chain drive disintegrate.  This is a well known fact in Florida.

5.  Should you take the risk of using directional/blinkers keep them on at all times in order to confuse the driver behind you.

Alternatively you might signal right or left at an intersection, but then go straight ahead to annoy the driver behind you. This practice is  recommended by the Department of Motor Vehicles in Florida.

6. Your windows, mirrors and sliding glass doors cover themselves in dirt and smears five minutes before your guests arrive.  They do this in league with flat surfaces which recruit dust at the same time.

7.  I insist that these profound learnings (and nothing else)  be read in the eulogy at my burial service.
Posted by J. Michael Povey at Thursday, January 09, 2014 2 comments: Links to this post

Deeply aware of the shortness and uncertainty of human life

The words "Deeply aware of the shortness and uncertainty of human life" are to be found in the American Book of Common Prayer (and most likely in many other Anglican Prayer Books).

Those words come to us from the 17th Century (when life was often brief, and always uncertain).

They were penned by one Jeremy Taylor (1613-1667) who was at one time Bishop of the  Irish (Anglican) Bishop of Down, Connor and Dromore.

But I have digressed (so what is new? you ask).

I go back to being "Deeply aware of the shortness and uncertainty of human life".

Catherine W is a woman I have known since 2006 when I moved to Sarasota. She is lively and knowledgeable, and skilled in just about every endeavor to which she turned.

Catherine moved into my local community (Glen Oaks Ridge, SRQ) last year, to a condo about 300 yards from mine.

She transformed one of our rather boring condominiums into  a home of great beauty.

I was a guest on New Year's Day (2014) at  fabulous brunch hosted by Catherine.  Her hospitality was fabulous, the food was great, and her other guests were both congenial and delightful.


Her party was a wonderful way by which to begin a New Year.

Today we became deeply aware of the shortness and uncertainty of human life.  For our dear Catherine died yesterday Jan 7th 2014  (or today - Jan 8th 2014).

All I know is that she was found in her bed this morning, (Jan 8th) having fled this human life.

Damn, I cannot comprehend this.

But it is another reminder of the shortness and uncertainty of human life  - a reminder that make me so sad (and makes me angry).

I am not using Catherine's full name 'cause I am not sure that all her children and grandchildren have heard of her death.

But "dammit" I will miss her so much.

Posted by J. Michael Povey at Wednesday, January 08, 2014 No comments: Links to this post

As Penne and I took our final walk today we met a most handsome young dog and his owner.

The dog was a "Fawn Doberman".

I have never before encountered a Doberman with this hue.

The one I met today is more or less a frisky young pup. Despite Penne's many reservations about other dogs, she was happy enough to play with the gorgeous Doberman.

This photo is from the web.  It is not the splendid dog we met today.  But you can "get the idea". 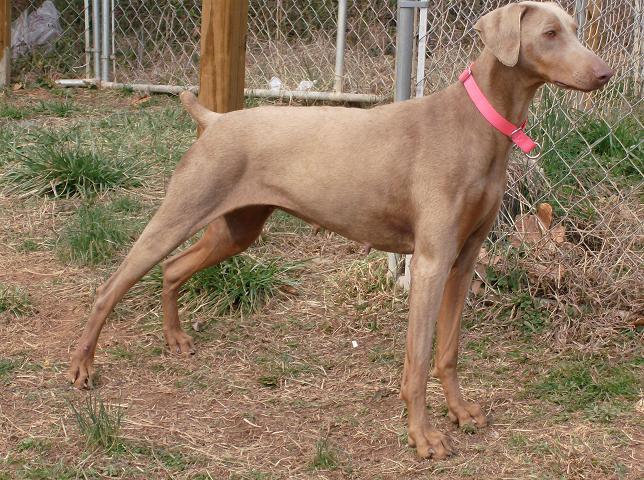 Posted by J. Michael Povey at Tuesday, January 07, 2014 No comments: Links to this post

As I walked out - ( D-Day (1944) and a surprisingly delightful conversation.)

Regular readers will remember that I have previously referred to an older couple who walk early each morning.  Our paths often cross as they and I walk. They are snow birds.

I used to think that they were somewhat miserable, so I unkindly pegged them as Mr. and Mrs. Pickle Face. Once I got to know them I discovered that their somewhat stern faces mask very warm hearts,

For the longest time I addressed them as Don and Victoria.....  until I was alerted to the fact that their names are Bob and Virginia.

They are lovely and gracious indeed.  Their year round home is in West Virginia (not far from Bethany College WVA.) Bethany College is rooted in the early 19th C  "revivals" under Alexander Campbell.  (Look it up!).

This morning I got into a  longer conversation with Bob  and Virginia. They were surprised and delighted to discover that I know a bit about Alexander Campbell.

Somehow (I know not how) our conversation moved to World War II and the D-Day Allied Invasion of  Europe.

Bob, with great reluctance, told me that he was in the invasion force into Normandy on 6th June 1944 (eleven days after my birth).

Good Lord above: I have been chatting for about five years with  hero of D-Day and the Normandy invasion and did not know it.

Like many true heroes,  Bob  is reluctant to talk about the horror of D-Day.  HE WAS THERE.

I am grateful for my chance encounters with Bob and Virginia.


Given the chronology of WWII,  Bob and Virginia are surely in their late Eighties or early Nineties.

They walk at least three miles every morning!

AND THAT'S THE WAY IT GOES

Posted by J. Michael Povey at Monday, January 06, 2014 No comments: Links to this post

Eposcopalians?  No, not another break-away Church.  Blame it on my poor manual dexterity  (but I can talk good).

Dog tails. Late this morning Penne and I walked through what is called "no man's land" - a wee strip of undevelopable ( thank goodness) land between Glen Oaks Manor and Glen Oks Ridge.

We came upon three children who were playing there.  This was great because we live in a 55+ community and never see or hear children unless they are visiting their grandparents.

One of the children, a boy aged probably eight or nine stood with his arms leaning on a low fence as her surveyed the scene.

As we drew nearer he said "you have a very pretty dog"  I happen to agree with him, but I was surprised and delighted to hear this from a young lad.

I introduced him to Penne, showing him how to greet a dog in a friendly way.  Penne adjusted her make up and then wagged her tail, as the young lad scratched her haunches.

Foot in Mouth. I was at a Viola recital this afternoon, give by the very talented Phillip Hall, who is just under 18 years old, and getting ready for college.  Phil is the son of Jean Hall and her husband John.  John is our Rector.

Phil's recital was just about flawless.  It amazed me that he could play music by Bach, Brahms and William Walton without a score. Terrific.

The recital took place at the "Whitfield Memorial Presbyterian Church" in Bradenton, FL.  I have driven by this Church so many times and have always thought that it must be one of the ugliest Church buildings in the area.

It was even worse inside.  The architecture has no redeeming features.

As I chatted with friends after the recital I ventured to say "this is a truly ugly Church".

WRONG! For standing next to me was one of the most faithful members of the Church. She explained how the Sanctuary had been divided in to two halves and this I could not see its true beauty. I muttered polite nothings.

But what was sad is that as wee looked out onto the large parking lot she said "there used to be 400 cars in that lot each Sunday.  Now there are only 100".   She said it again.

So that is why the Sanctuary was divided in two. The Church has "lost"  (or failed to replace) three quarters of its membership.  And that will be the way of the world for most of the mainline denominations in Florida.

I am not sure if that is bad or good.


Posted by J. Michael Povey at Sunday, January 05, 2014 No comments: Links to this post