Ben and I took a drive this afternoon down to Manasota Beach, on the Gulf of Mexico, just west of Englewood, FL. It's a 35 minute drive south of my home.

The beach itself is lovely and unspoiled. The Key is a bit over-built. I took some photo's just for fun. 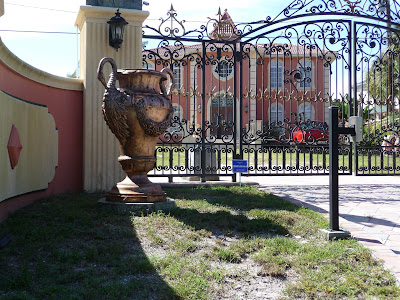 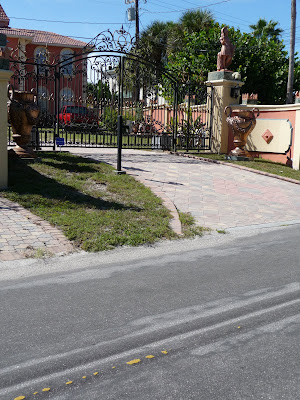 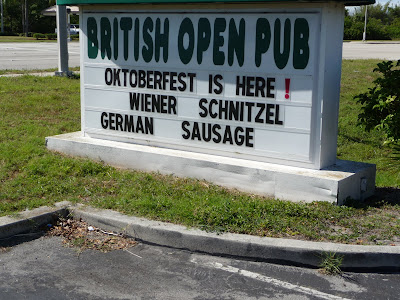 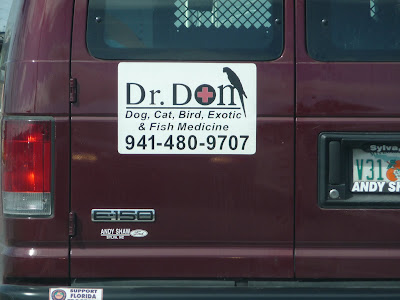 What are "exotics"? Perhaps Archbishops. Maybe Dancing Girls. Whatever- Dr. Don has a medicine for them.

Manasota Beach itself. (not my photo' but one pulled from the web)
Posted by J. Michael Povey at Saturday, October 24, 2009 No comments: Links to this post

A most pleasant day!

The day of which I write began on Wednesday 21st October ’09 with the prayer service which I lead each week at “Resurrection House” (A day shelter for homeless people in Sarasota, FL).


I do not preach at these services. Homeless people are obliged to listen to many “preachers”, as the ticket price for a meal.


Instead, I choose a bit of a bible verse (e.g. “I am the light of the world”) which we repeat out loud for 4 or 5 times, and then say “in the silence of our hearts” for a couple of minutes.

Then we light candles on the altar table as a sign of prayer. Some people vocalize their prayer; others light a candle in silence.

There follows the “Our Father”, and the “Hail Mary”. We then stand in a circle with our hands on each others’ shoulder as I utter words of blessing. We often end with a chant from Taize.

Later in the day, at home, my new bed was delivered, (more about this in a minute). In the evening I had a fabulous dinner at the home of friends Ron and Charlotte. They are both great cooks, and dinner at their home is always an occasion for great conversation. My pals David and Ben were also with us.

This day, Thursday 22nd October I attended to various chores, in anticipation of the arrival of friends: Ben (again!), Orlando, and James as my guests for lunch. I served a simple home-made chicken salad, with good bread from the German bakery here in SRQ.

The four of us were relaxed enough to stretch lunch out to two hours! My good dog Penne decided that we were good company, and she stretched out on the floor next to the dining table on the lanai.

Penne is a great dog. She loves to walk, and we have been out five times today. I like to watch her as we walk: her head held high, and her tail wagging. Passersby inevitably say “what a lovely dog”. That she is.

About my new bed: I bought it in the face of the fact that I need to sleep almost sitting up, to counteract some mild sleep apnea. This bed is adjustable, and is made by “Ergomotion”.

It’s priced as high as $1480 via internet suppliers. Fortunately for me there is a Macy’s remnant store in nearby Bradenton. (English readers - “Macy’s” is a medium to upscale departmental store in these United States). I was able to buy the (new) bed and mattress at the Bradenton store for $399.

Indeed I have had a most pleasant day, for which I am thankful.

Now I hope for a most pleasant night in my new bed! 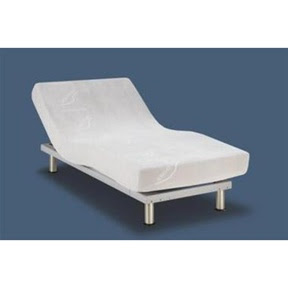 Posted by J. Michael Povey at Thursday, October 22, 2009 No comments: Links to this post

The Bishop of Rome's dance card.

The announcement by the Bishop of Rome ( a.k.a. The Pope) regarding the possibility of Anglican groups coming under his umbrella (or being corralled into his stockade) will be a bit of a seven day wonder in the media. It was a bit surprising to see it as front page news “above the fold” in today’s Sarasota Herald Tribune.

As my good Rector Ted Copeland pointed out, there has been a steady stream of Anglican individuals going over to Rome for well over a hundred year.(We call it “swimming the Tiber”).

But Benny's edict is something quite new, in that he is open to welcoming not just individuals, but so-called Anglican groups to come under his jurisdiction

Rome is able to "tolerate" various alternative rites, provided that Papal Supremacy is acknowledged, and has done so with such Churches as the Ukrainian Catholic Church, the Maronite Church and the Melkite Church.

So there well may be various Anglican communities which are accepted by Rome, tra la la. Let's wish them good luck in the name of the Lord. Or maybe "God-speed".

Of course I hope they will read the as yet unpublished “small print”. The devil will be in the details.

The media will probably be too lazy to report that many many thousands Roman Catholics in these United States have become Episcopalians – preferring the comparative freedom of our version of Catholicity to the rigidity of Rome. Also hundreds of American Roman Catholic Priests have been received into the Episcopal Church (and we do not re-ordain them!)

I am uncomfortable with and opposed to ecclesiastical imperialism, whether it be from Rome, Canterbury, Constantinople or Geneva!
Posted by J. Michael Povey at Wednesday, October 21, 2009 No comments: Links to this post

Katherine J Schori is not nice

Being “nice” is not enough….


British Premier (from 1937 to 1940) Neville Chamberlain tried to be nice to German Chancellor Ad-lph H-tler. That niceness was not productive.

Current Archbishop of Canterbury, Rowan Williams has excelled in his niceness to Benedict the 16th, Bishop of Rome. “Benny 16”, a.k.a. the Pope, has responded to this niceness by flirting with, and seducing Anglican dissidents. (Rome never changes).

Our good President Barack Obama has the right instincts on many policy issues. But he is being too damn nice to those Republican Senators and Representatives who are working day and night to retard Obama’s progressive policies.

It’s impossible to be nice to Palestinians without being honest with Israelis.

I want to slide through many days by being nice.
From time to time I have the courage to move from niceness to honesty. It is hard work.
I so wish that Archbishop Rowan, and President Obama, and the near-East peace negotiators would share a desire to be more honest than nice.

P.S. (Our Episcopal Primate - the Most Revd. Katherine J. Schori - is a skilled practitioner of honesty (thanks be to G-d).

She is fabulously honest. She gives no ground. But she makes her points with graciousness. (Rowan Williams and Barack Obama could learn from her).
Posted by J. Michael Povey at Tuesday, October 20, 2009 No comments: Links to this post

The food of the gods

I took lunch (as they used to say) at Sarasota’s “British Pub and Restaurant”. It was my colleague Jack Chr-sman’s birthday, so we celebrated it there, together with his wife Donna.

Jack and Donna have spent many a year in England. Today she opted for a good Cheese-burger. Jack had bangers and mash. I enjoyed each mouth full of steak and kidney pie.

And even as my American friends go “eeew” - I solemnly warn them. On St. George’s Day (April 23rd) in heaven the only menu item will be steak and kidney pie - so please develop a taste for it now! (It truly is a heavenly dish!)

Posted by J. Michael Povey at Monday, October 19, 2009 No comments: Links to this post

I sometimes get a bit maudlin and sentimental, for no immediate reason.

It’s just the way I am some days. I think that it is OK!

The word “maudlin” is derived from “Magdalene”.

Mary Magdalene was the one who wept at the grave of Jesus, and “maudlin” means “weepy”.

(Incidentally, the first names “Madeline” and “Maud” come from the same root of “Magdalene”).

When I am in a maudlin frame I often go to Sigmund Romberg’s song “When I grow too old to dream”. It’s a song that makes me cry - in a good way.

Sigmund Romberg, born Zsigmond Romberg (July 29, 1887 – November 9, 1951), was a Hungarian born composer who moved to America and contributed to the great American genre of musical theatre,

Wikipedia has this to say about him: http://en.wikipedia.org/wiki/Sigmund_Romberg

Here is the text of “When I grow too old to dream” (written with an older meaning of the word “gay”).

We have been gay, going our way

Life has been beautiful, we have been young

After you've gone, life will go on

I'll have you to remember

Your love will live in my heart

So, kiss me my sweet

And so let us part

So, kiss me my sweet

And so let us part

And here is a video of British vocalist Vera Lynn rendering this song (with WWII undertones).

Maybe you will also enjoy being maudlin with me!