Good to the last drop

I've owned the flashlight/torch for more than twenty years.  But I dropped into onto a hard surface for one too many times, making it erratic in its performance.   Bye bye good flasher!

I am sparing, nay even skimpy, in my use of hair shampoo.  I got the last drop from this one yesterday.  I had made the bottle  last for one whole year!


I replaced the flashlight/torch with a three pack  -  on sale at Walgreen's for ten bucks.  (Yes, three for $10)

Each one takes three AAA batteries and has a brilliant LED beam.

The batteries cost more than the three torches.

via my friend David L.

Kudos to Annie Rogers and Kippy Altini,  they were the winners who identified  SMELT.

I still find it odd that I had been thinking of these fish for a few weeks,  (they were prized by my late good friend Ben Morse), but that I could not remember what they were called until the up and coming Sarasota "Detwilers Farm Market" was selling them a couple of days ago.

Fish is good for Breakfast.  So it was that I pan fried some smelt in olive oil this morning,  until they were crispy.

This will disgust some of my American friends:  "Crispy" means eating the whole fish  (sans head) --  the skin, bones, tail and flesh - all of it.

The Strange Energy Of The Universe.

I've been thinking for a couple of weeks about a small fish which my late friend Ben M. liked greatly; a fish which was sometimes sold at our late and lamented Sweetbay supermarkets.

In recent years this fish has not  been available in any local markets, nor could I remember what it was called.

It seemed silly to ask the various fishmongers " I can't remember what they are called,  but do you ever have some of those delicious small fish which are delicious when pan-fried?"

Then the energy of the universe caught wind of my thoughts about this fish, and arranged matters!   So "lo and behold" I saw some this morning,  and bought some at Sarasota's Detwilers Farm Market.

You betcha that I will be pan-frying some for my breakfast tomorrow (Jan 23rd w2020).

How many of you remember what they are called?

How many of you have ever eaten them?

My first love was Penne

Ben came from Sarasota's Racing Dog Rescue Program in March 2017.   I liked him so much, and can still "feel" his wet nose as we walked, and he nudged my hand.

But this fabulous greyhound had acute separation anxiety when I was not in sight. He bent the bars of his crate inwards (leaving blood from his jaws  on the tiled floor).  I left him in the car one day whilst shopping and he chewed through my driver's seat belt.

The poor boy was so lonely.  He went back to the RDRP and has been re-homed with  a family which already has a Grey.  There he is doing splendidly, 'cause he has a pal!

Greyhound Racing has now been abolished in Florida.

I tried another adoption later in 2017 via the Humane Society of Sarasota County.

This time it was with Izzy, a Catahoula Leopard Dog from Louisiana.

Zion adopted me from the Humane Society exactly two years ago today, on 20th Jan 1998

He has brought unmitigated joy to me:

to my friends and neighbours;

to the "regulars" we meet when walking in Sarasota's Bayfront Park and Arlington Park;

to the memory impaired men and women at Anchin Pavilion (Sarasota), and Discovery Village (Bradenton);

to the GLBTQ young people at ALSOYouth in Sarasota;

to students at New College, Sarasota.

and the list goes on, even as my gratitude increases.

A supermarket encounter. "I am SO sorry." (and some humour) 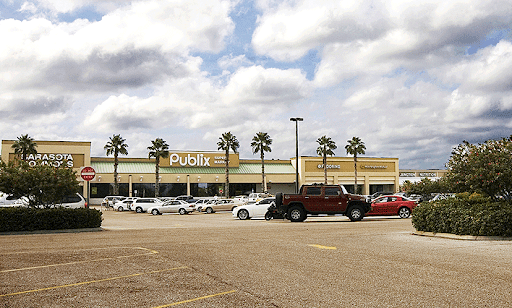