Errors of the Bishop of Rome which have been swallowed in The Episcopal Church.

March 02, 2013
Ed Rodman of the Diocese of Massachusetts has words of wisdom for those who wish to be ordained, and to those who are already in holy orders. He says “Don’t believe your own propaganda”.
“Aye, there’s the rub”:   many of we the ordained believe our own propaganda.
That belief leads us to resist honest criticism from others, and more dangerously, it shields us from self examination and self-critique. It’s the deadly sin of clericalism, a sin in which I have indulged on many an occasion.
One of the bits of clerical propaganda which we in the Episcopal Church have swallowed hook, line, and sinker is that in ordination there is a change in our being.
It’s a Roman Catholic myth which has been swallowed by even the most evangelical of clerics.
It says that “when I was ordained I became a priest, and my very nature was changed. I am not a man or woman who serves as a priest, I have become a priest, and nothing can change that”.
(If you want to be technical the Roman view of ordination [accepte…
Post a comment
Read more

The Bishop of Rome etc

March 01, 2013
I am bemused, and not a little annoyed by the obsessions of many of  my Anglican/Episcopalian/Church of England friends about the abdication of Pope Benedict, together with the speculation about his successor.
As Anglicans we are in the good reformation tradition which teaches that the so-called Pope is nothing more or less than the Bishop of Rome.
We also deny his claim to be the Supreme Pontiff of the Church as being un-biblical, and of late development in the history of the Church.
The identity of the new “Pope” matters very little to our life in Christ and our sharing of the Gospel.  In fact he will continue to assert that we are not truly Church, and therefore are imperfect Christians.  Fie on such nonsense.
And fie on the parallel nonsense which asserts that Cardinals are “Princes of the Church”. That myth has enabled so much harm to so many people.
They are Bishops -  that’s all. The job of a bishop is to be a Pastor not a Prince.
Part of the subversive results of those myths are tha…
Post a comment
Location: Rome, Italy
Read more 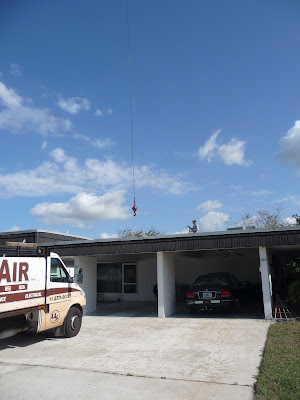 So, after a second report on my central air/con unit I decided to cough up and replace it.
There was a lot of corrosion on the coil, and around the electrical switches, and some loss of cold air.
The unit may well have been good for another six, eight, or twelve months but I decided that discretion was the better part of value. Therefore it was (in my judgement) wiser to replace the unit now than to risk its failure in mid-summer.
The cost made me say “ouch”, but then I remembered that I have some savings which are set aside precisely for such an event. Better to use these savings now than to shell out more in the future.
The local Air Con company which I use sweetened the deal by adding an ultra-violet light (to prevent mould) at no extra cost (saving me $400+ – or so they say!), and by giving me a voucher for one year of free maintenance.
The guys: Gerry and Chris arrived at 8:30 a.m.  They finished by 1:15.p.m.
There was huge excitement in my neighbourhood when the crane arrived to remo…
Post a comment
Location: 3901 Glen Oaks Drive East, Sarasota, FL 34232, USA
Read more

Good news about a person, some "candy", and my supper.

February 27, 2013
MARK
Mark was a regular at the Resurrection House (SRQ) Prayer Service which I lead every Wednesday. He is a gentle, almost meek (in the best sense of that word) man. Last Monday I saw him again.  He has a job at my local “Winn Dixie” supermarket. Whoop-dee-do.  Pray that he will continue to be employed.
LIQUORICE COMFITS The local Trader Joe’s store is selling Liquorice Comfits. If you do not know what they are it doesn’t matter. If you have eaten and enjoyed them you will understand that I am in danger of over-dosing.

WALDORF SALAD, is rarely seen on restaurant menus these days. So I made my own for supper today. So good!
Post a comment
Location: Sarasota, FL, USA
Read more

February 26, 2013
For reasons which are beyond my ken the builders of our Glen Oaks Ridge Condo’s decided to place our central air-con and heating units on our flat roofs. (Maybe it made the internal duct work easier to install).

My unit is about 11 years old and provides more than adequate cold air in summer and heat (for a few days) in winter.  I have it serviced every three months under contract with a local firm.

Today the “service technician” told me that the coil was “impacted beyond repair” and that the unit needed to be replaced (at a cost of $5,300).

He took me up onto the roof to view the “damage”, but as far as I was concerned he could have been a brain surgeon explaining some wondrous surgery.  I did not know what I was supposed to be seeing.

I agreed to have the unit replaced and gave him a deposit of $500.

Then I began to think!

1.His report said that the coil was rusted.

2.He asserted that the system was under strain because of mould and dirt.