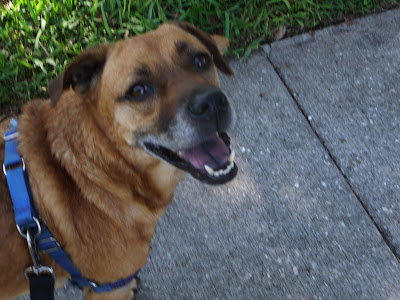 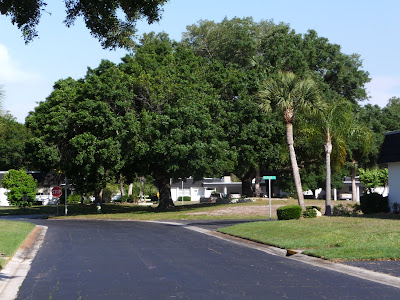 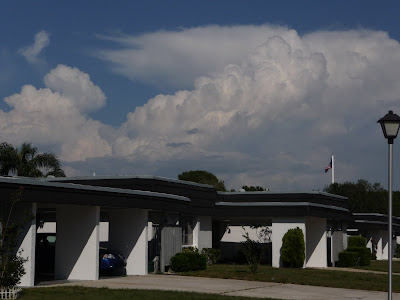 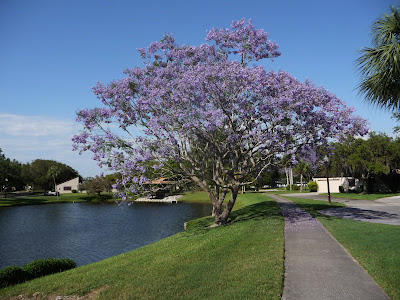 3. In flat Florida the clouds are our hills and mountains.

4.  Our Jacaranda trees are so lovely
Posted by J. Michael Povey at Saturday, May 08, 2010 1 comment: Links to this post

JMP on the British General Election.

In  regard to the British General Election.
I left Great Britain 34 years ago, so what the heck do I know!  Here are my guesses.
1.      The election is indeed hung.
2.     The Tory party received the largest number of votes cast, and has won the most seats.
3.     The Tories are way short of a parliamentary majority.
4.     The Liberal-Democrat party had a less than hoped for number of votes, and lost one parliamentary seat.
5.     The Labour party lost many parliamentary seats, but did not receive the expected “knock-out- blow”.
6.     Far right parties (The British National Party and the United Kingdom Independence Party) did not attract more than 5% of the vote, and did not win any parliamentary seats.
7.     Those parties (B.N.P. and UKIP) lost seats at the local government level (City and County Councils).
8.     The Labour Party actually gained seats at this local government level.
9.     I suggest that the election was not so much a repudiation of Labour, as it was a black eye for the Labour Leader, Gordon Brown and his predecessor Tony Blair.
10.  The Conservatives (Tories) should indeed be asked to form a government on the basis of (2) above.
11.  They can only do this with the support of Liberal-Democrats, unless they are willing to form a minority government.
12.  Is a Conservative/Liberal-Democrat alliance viable given Conservative Euro-scepticism and Liberal-Democrat Euro-enthusiasm?
13.  Will Labour be tempted to form an alliance with the Lib-Dems in order to hang on to power?
14.  Would the Lib-Dems be interested in  such an alliance if Labour promised to move the electoral process towards proportional representation ( a Lib-Dem priority)
15.  Will the British electorate get fiercely angry if Labour and the Lib-Dems form such an alliance?
There is my 2 cents worth.  British readers -  please correct my analysis where you disagree with it!

By the time most of you read this we shall know the “result” of the British General Election.

We’ve had very little information on the substance of the election campaign. I am led to believe that the three main political parties are each more or less centre-right (with the Liberal Democrats being a wee bit centre-left), and the voters are deciding based on the charisma or lack thereof in the three party leaders.

Certainly from this side of the pond the campaign has appeared to be the most “presidential” in British history thanks to the three televised “debates”.

In the British constitution (it is a constitution of precedent – not a written document) the Sovereign has the prerogative of asking any Member of Parliament to form a Government. If that member is able to do so, she or he then becomes the Sovereign’s First (or Prime) Minister.

I wonder if the royal eyebrows have been raised at the implication of this new “presidential” style election – viz that she is bound to ask either of Mr. Brown, Mr. Cameron or Mr. Clegg to form a government.

In these United States, over  the entire social, political, and entertainment worlds, style  not substance rules the day  ( ‘Tis probably also true on the world of religion).

This came home to be yesterday when I received a glossy brochure from our Congressman, Vern Buchanan (R).

Buchanan is a party hack with no discernable personal convictions.

Thus his brochure is able to proclaim “I’m working in Congress to protect the benefits seniors have earned and the savings they have accumulated”.

The protection of savings is a worthy goal, but Buchanan fails to mention that he is opposed to the current Bill to introduce some sensible regulation into our banking industry.

Many folks have lost savings simply because since the days of Reagan there has been less and less regulation. (To his shame, Clinton continued this practice).

There is a contradiction between Buchanan’s promise and his voting record.

Similarly his “work” to protect benefits is in opposition to an Amendment which he is proud to say he has introduced into Congress to balance the national budget.

A balanced budget is a worthy and necessary goal.

Every independent economist or financial expert is agreed that in order to achieve this we must both increase taxes and reduce spending.

But Buchanan is opposed to cuts in benefits, and to tax increases.


I haven’t the slightest idea how Buchanan’s amendment would achieve a balanced budget without these two elements.
Nor does Congressman “Fluff and No Substance” Vernon Buchanan.
Posted by J. Michael Povey at Thursday, May 06, 2010 No comments: Links to this post

Getting a slap and some electric shocks - all in one day.

I awoke sometime in the middle of last night (May 4th/5th 2010) because someone had slapped the top of my right foot.
In a semi-somnolent state I cried out “who is it?”
When I eventually awakened fully I realized that I had slapped the top of my right foot with the sole of my left foot.
Then I started to giggle at the thought of my anxious cry:  “who is it?”
I am a very restless sleeper!
Later, in the mid afternoon of May 5th, I got about 20 electric shocks.
Being slapped and electric-shocked all in one day is a bit much.
But the shocks were administered by a Neurologist who was trying to find out why my left hand has become numb and tingly. He also stuck some pins in the muscles of my hand and arm to measure their activity.
Was it “Parkinson’s Disease?” – No
Or “Carpal Tunnel Syndrome” – No again

‘Tis all much more simple.
It turns out that a nerve my in left elbow is a bit bruised.  This is most likely because I spend so very many hours using my computer all the while time resting my left elbow on the hard wooden arm of a chair.  That nerve leads directly to my hand.
Medical Science is truly marvelous. A “tingly and numb” left hand had worried me.  A good Neurologist with exceptional technology had been able to allay my fears in the space of 45 minutes.
Now I have changed chairs at my desk and I am using a straight back chair with no arms. This should “take care of things”.
Do not tell anyone, but I thought that the electric shocks were “kinda” cool and fascinating.

Posted by J. Michael Povey at Wednesday, May 05, 2010 No comments: Links to this post

Welcome to the USA 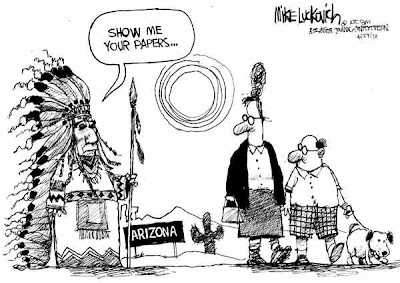 Even shy people can "get it"

Even shy people can "get it"

For much of my life I dreaded parties. My gregarious “outside” hides a shy “inside”, so I would attend parties with the certainty that I’d be off in a corner on my own.


Of course this never happened and I most often enjoyed the event far more than I could have imagined.


I was at a party last Saturday evening. It was a catered affair to mark the retirement of Wes and Cindi Wasdyke from St. Boniface Church. We were in a lovely home in the not very well known “Oyster Bay” section of Sarasota.

Here is how one local Realtor describes Oyster Bay
Oyster Bay Estates is a highly desirable west-of-trail waterfront neighborhood. The tree lined streets are graced by traditional Florida homes which are slowly giving way to new estate homes on spacious lots. These are quiet, tree lined bayfront community for those who desire a taste of the old Florida lifestyle.
In Oyster Bay, many homes are either bayfront or on canals which lead directly to the Bay. This is a boaters paradise, with open waters just feet away.


That’s a fairly good description. The many old oak and banyan trees add and air of tranquility to the neighbourhood, and provide much needed “natural cooling”.

Our hosts were Reg and Alan. Reg is a member of St. Boniface and I know him fairly well. Alan is not a church attender. Their home is utterly lovely and is surrounded with gorgeous gardens which they have created.

But even lovelier than the home and garden was the way in which they made us feel at home and altogether welcome. It was almost as if they were saying “we have this lovely home just so that you can enjoy it with us”.


I suppose that I knew about a third to a half of the guests. The others were strangers to me - they were the spouses and partners of the St. Boniface staff - all of us there with fond affection for Cindi and Wes.

I had a lovely evening, in part because I met good folks who were strangers to me (and I to them).

For instance, I met a stockbroker who works for a prestigious national company. With a bit of trepidation I asked him what he thought about ’s economic interventions. (You can guess what I expected a stockbroker to say!). In fact he said that the program was wise and essential, and that if the government had allowed and Goldman & Sachs to go belly up we’d now be dealing with 25% unemployment and possible civil unrest).

I wish that the Republicans (who on principle oppose every little last detail of Obama’s policies), and the “Tea-baggers” (who are opposed to everyone who is even marginally to the left of Genghis Khan, Attila the Hun, or Vlad the Impaler) would give our President and his just a scintilla of credit for what he is doing.

But then again, I have sometimes wished that pigs could fly!!
Posted by J. Michael Povey at Tuesday, May 04, 2010 No comments: Links to this post

This too is Florida

SCENES ON THE MYAKKA RIVER - just a 30 minute drive from my home. So many folks have no conception that many parts of Florida are as lovely as this.

We are more than Disney and beaches! 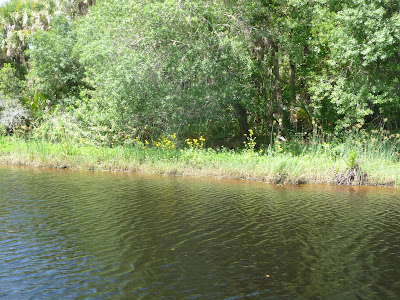 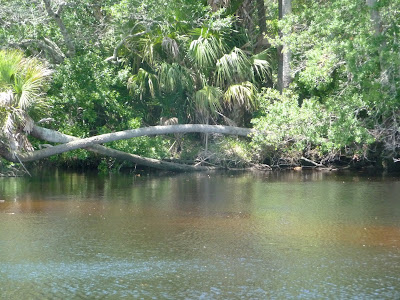 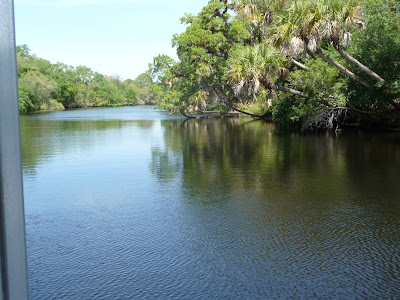