With that in mind I confess that I  am a great admirer of the French National Anthem "La Marseillaise".  Never mind the words,  it has a magnificently stirring tune.

Twenty five or more years ago I came across Hector Berlioz' superb and extended version.  It is thrilling!!

Back in my St. Stephen's, Pittsfield, MA days (1984-2000)I would tote my C.D. player into the office on or near Bastille Day to play the Berlioz version as recorded by the Baltimore Symphony and Chorus in about 1988.

The late and great parish lay leader Phil Desch and I would go into rhapsodies as we listened to the  superb Berlioz  arrangement of La Marseillaise.

And (heaven forfend) I introduced the Berlioz version to my French friends Jean-Paul et Lizzie who had never before heard it.

And here is a recording of Berlioz'  great version:

Posted by J. Michael Povey at Saturday, July 14, 2018 No comments: Links to this post

Zion and I were at work today at a local Memory Unit/Assisted Living facility.

We encountered a lovely gentleman on the assisted living floor.  He's met Zion previously and was happy to see us.

I asked the man about his service.  He'd seen service in such places as Guadalcanal and New Guinea.  I did not press him for details about his tours.  That may come if I get to know him better.

But I had a sense of awe.  Here I was talking to a man who truly knew what it meant to defend our freedoms in the face of Japan's Imperial might, (Remember Pearl Harbor)  He had been in the thick of it.

This man was at war before I was born.  What a truly awesome privilege to meet him.

Here is a bit about the 13th "Jungle" Air Force.


P.S. B 29 Super fortress taking off from Guadalcanal.

I can't disagree with this

As I walked out in Arlington Park, Sarasota this morning I encountered the two thirty something women  (probably friends and neighbours) who step out with energy and zeal each day.

That's the truth!  Zion and I accepted the compliment.

He is a beautiful blessing.
Posted by J. Michael Povey at Thursday, July 12, 2018 No comments: Links to this post

President Trump's comments that "Germany is captive to Russia"

Donald Trump may have used typically emotive – if premeditated – language from the outset at the Nato summit in Brussels to lambast Germany for its willingness to build a gas pipeline, but the US president’s view that this will make Europe particularly dependent on Russian gas is widely shared by European politicians, thinktanks and energy specialists, including some in Berlin.
No country is more angry about the pipeline than Ukraine, an ally Trump is supposedly poised to abandon when he meets the Russian president, Vladimir Putin, in Helsinki on Monday.
Ukraine stands to lose billions of much needed dollars if Russia can transfer its gas transmissions to Europe across the Baltic Sea, away from a pipeline running across Ukrainian territory.
This week the Ukrainian president, Petro Poroshenko, said: “This is not a commercial project – it is not economical or profitable – it is absolutely a political project. There is no point, from the economic point of view, creating this project. This is absolutely a geopolitical project.” 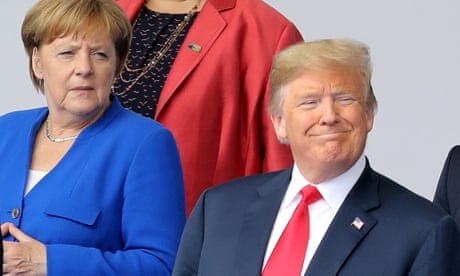 Angela Merkel hits back at Donald Trump at Nato summit

Read more
By contrast the German chancellor, Angela Merkel, has tried to maintain that the construction of Nord Stream 2 pipeline is a common sense economic project, with no political consequence. For many, her refusal to see the geopolitical implications of making Europe so dependent on Russian energy shows the reach that Gazprom, the majority shareholder in the project, has into Germany. The presence of the former German chancellor Gerhard Schröder on its board and his friendship with Putin seems only to symbolise the triumph of Russian interests.
The aim of a second double-pipeline – which was once scheduled for completion by the end of 2019, but is now likely to be delayed – is to act as a decades-long substitute for the decreasing production of the Netherlands, Denmark and Britain. For Merkel it is also politically essential to get Germanyout of nuclear energy by 2022, but still reduce her country’s carbon emissions.
Sweden, Denmark and Finland have expressed ecological reservations about a second natural gas pipeline at the bottom of the Baltic. The Danish parliament has empowered its government to veto the pipeline on security or environmental grounds and, separately, the European commission has objected on the basis that the project will undermine its plans for an energy union, including a greater diversity of supply.
The UK has also been objecting, albeit less stridently. A letter sent by the former foreign secretary Boris Johnson to the all-party group of MPs on Poland two months ago echoed many of the objections voiced by the commission. The Foreign Office, in the eyes of some MPs, has not been keen to advertise its differences with Berlin in the middle of the Brexit negotiations. Poking Merkel over Nord Stream 2 risks alienating her at a sensitive moment.
One of the curiosities of the controversy is that attitudes to the pipeline are thought to be a litmus test of how someone perceives Russia. Trump, famously well disposed to Putin, is, not for the first time, the exception that proves the rule. By opposing the pipeline, perhaps for an amalgam of US commercial and security reasons, he seems to set himself against Putin’s largest geoeconomic project.
But it is possible that Trump’s target is not Moscow, but Berlin, and the Russian president is merely the victim of a wider trial of strength between the two great western economies.
There are also questions over whether Germany needs Nord Stream 2. The pipeline will deliver at least 55bn cubic metres (bcm) of natural gas from Russia to Germany annually, just like the first-double pipeline, representing 110 bcm together. At present, German natural gas consumption amounts to about 80 bcm a year, of which just over a third is covered by Russia. Many energy experts say efficiency measures will result in reduced demand, leaving a gas surplus. 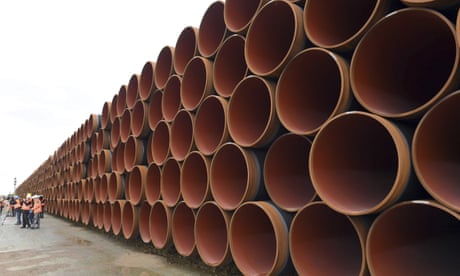 Read more
Merkel has promised Ukraine and Poland that existing transport routes over land would continue to be needed in the future, but these promises are seen as valueless in Ukraine.
Ukraine says that Gazprom’s chief executive, Alexei Miller, has differed publicly, stating that he would no longer want to use the Soyuz pipeline that crosses its territory from 2020 onwards. Gazprom insists all the natural gas for western Europe should be transported through the Baltic Sea, with Germany acting as a distributor country.
The biggest fear is that the pipeline allows Russia a boot on the throat of Europe. It had not been afraid to cut off supplies faced by price disputes with Ukraine.
Nord Stream’s defenders, however, see the US protests purely through the prism of US commercial self-interest. Trump’s outburst is regarded simply as an effort to promote the sales of American liquified national gas.
The question now is whether the US Congress would follow through in its threat to sanction European companies involved in the pipeline. The US treasury has shown through secondary sanctions on firms trading with Iran that it possesses an overwhelming economic power to force EU firms to divest from commercially profitable projects.
For all the talk in Europe about establishing a European economic sovereignty, the reality is that the US under Trump can expose that ambition as a fiction. The question is whether it is in the US’s self-interest to wield its power over its supposed allies and partners quite so nakedly.
Posted by J. Michael Povey at Wednesday, July 11, 2018 No comments: Links to this post

It's probably worse that we could imagine

Think that it is hotter than hades where you live?  You are not alone. Much of the world is baking hot.

Ice melting in Arctic and Antarctic.

Unprecedented floods in some places

Disastrous droughts in others

Extinction of vital species in the oceans, in the air (birds and insects), and on the land

Utterly polluted water sources in rivers, aquifers, and the oceans

Unbreathable air in almost all the world's Cities

Mother Earth is stressed beyond belief.  We are almost certainly on the cusp of a global ecological melt down leading to famines, food shortages, new and deadly diseases, and new military conflicts.

I fear for my darling great nieces and nephews. They are ill-prepared for a future of hunger, thirst, and violence in the streets.

The crisis is not merely local or national.  It is international.   How should we respond?

Please God it will be by cooperation not fissuration.  I am not optimistic.

This is because I suspect that the impetus for BREXIT,  and for President Trump's incoherent trade policies etc are somehow unconsciously rooted in the belief that we are in deep doo-doo.  In the face of the coming ecological disaster their answer is to  "circle the wagons".

What if the wagons encircle not much more than death, disease and destruction?

We have all greatly rejoiced in the rescue of those twelve young Thai footballer players and their coach from what seemed to be certain death in a deep, dark and flooded cave.  We've breathed a sigh of relief, admired the courage of the brave rescuers, and wept for the Thai "Seal" who perished.

Guess what?  The rescue was made possible because of international cooperation.

GET THAT  you wagon circlers.

Now that I live in the American south I can say "you-all" know that I am immensely proud to be a native of the "mother of all Bristols", i,e. Bristol, U.K.

There are many places in the world which are named for my home town -  a place for adventurers, traders, sailors and slavers. See this:

My Staten Island cousin Kippy reminded me that there are a goodly number of towns and cities in the U.S.A, which are named for Bristol U.K.  (where her father was born).


Here are some of them: