I never knew until today that the word “sublime” is derived from the word “liminal”.

“Liminal” is a word that means thresholds, especially “sensory” thresholds.

Sensory thresholds are those times and experiences when sight, sound, smell, touch, or hearing move us beyond our minds into a sense of awe, wonder, or mystery. We are taken to a “place” which transcends “mind”, a place which is rooted in feeling.

“Sublime” is a word which describes those feelings which are “sub-liminal”.

If we are aware we will experience the sublime in such happenings as  sexual ecstasy, or music, or worship, or nature.

"Tis better to feel the sublime than to sublimate those feelings".

Posted by J. Michael Povey at Saturday, August 28, 2010 No comments: Links to this post


My sweet junior cat “Adelaide” has been leaking drops of urine all over the place during the past few days.

Of course I had to create three isolation areas, one for Adelaide, one for Ada (the senior cat), and one for Penne my dog, before I could identify which of the three was the leaker.

Without a doubt it is Adelaide.  I hauled her off to the veterinarian, who identified a weakness in the wall of Adelaide’s bladder.

Such weaknesses are more common in canines than in felines, but nonetheless my lovely Adelaide is suffering from this condition.

She will stay at the veterinary clinic for the weekend where she will receive a drug which may or may not ameliorate her condition.   Then I will face a Hobson’s choice.

(1)    If the drug is not efficacious then I might have to decide to have her “put down/destroyed/euthanized/put to sleep” - (whichever word works best for you).

Right now I am feeling a bit sad.  I could never have forecasted that I would have these feelings about a cat. Meanwhile my dog Penne and Ada, the other cat, are snuggled up together - a rare sight.  Maybe they are cannier than I.

Posted by J. Michael Povey at Friday, August 27, 2010 No comments: Links to this post

There is more public outrage in the U.K. and U.S.A than is healthy.

Too much outrage about too many matters.

Listen to the other side.


Posted by J. Michael Povey at Thursday, August 26, 2010 No comments: Links to this post

Canine cousins? - separated by an Ocean

POVEY FAMILY POOCHES.  One British, the other American -  but with quite a visual resemblance. 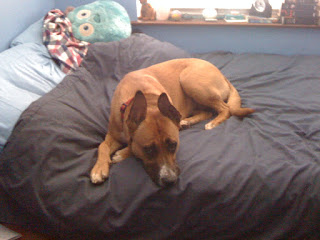 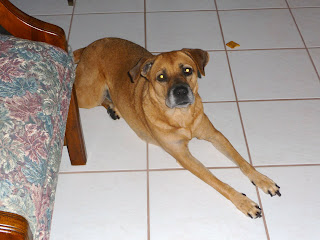 Posted by J. Michael Povey at Wednesday, August 25, 2010 No comments: Links to this post

“the memoirs of a beautiful boy”


Having recently overdosed on history and biography I reached for a book entitled “the memoirs of a beautiful boy” ( Robert Leleux, St. Martin’s Press, 2007) in my most recent visit to Sarasota’s Selby Library. The book is a memoir about growing up gay in an isolated town in Texas during the 1980’s.

It’s a slender book, one which I was able to read in two afternoons.

The dust jacket reviews indicated that the book might induce hearty laughter, but at the most it made me smile.

Despite the hyperbole of the dust jacket I found the book to be a tender memoir with sweet, poignant, sad, and funny parts.  I enjoyed reading it.

In one passage Jessica, a truth telling friend of the author says this: “Honey pie, life is not a layaway plan”.

She is so right.  Life is never about what may happen next week, or next year.  Life is what is happening right now, and the ways in which we respond to “today”.

More importantly, life is not about postponing happiness: an ever present temptation for busy and caring parents, and also for those whose lives are so dedicated to advancement in a career that they miss the pleasures of today.

Back in 1991 I listened to a sermon at St. Luke’s on Peachtree Street in Atlanta, Georgia, a sermon which I have never forgotten.  (I think that the preacher’s name was Palmer Temple).

He related the story of a married couple, (both school teachers), with two or more children. Every summer this couple would take their children on fabulous and extended trips. When the children were younger the trips took them to every corner of the United States.  When they became teenagers the trips were to Europe.

Some person suggested to the parents that the trips were far too expensive, and that Mom and Dad would be better advised to invest their spare cash in a retirement fund.

The parents responded thus:  “We have decided to invest in the bank of memories”.

That’s the wisdom of Jessica, and it is also the truth taught in the bible in Proverbs 27 v 1: “Do not boast about tomorrow, for you do not know what a day may bring forth”.

Posted by J. Michael Povey at Tuesday, August 24, 2010 No comments: Links to this post

There has been a lot of rain today in Sarasota. We received over 3 ½ inches in about 12 hours. There has been some local flooding, but none which has driven people from their homes.

I like rain (‘tis a particularly strange pleasure for folks born in England), and I am grateful for every drop which falls in oft-times parched Florida.

It has been bearable. Nonetheless, I have been a bit grumpy, since it’s been hard to walk with my dog in some of today’s torrential downpours.

I was delivered from my grumpiness when, as I walked in the rain, some muse reminded me of the disastrous floods in Pakistan. I have read about those floods, but since I (almost) never watch television, I had no visuals to remind me of the horror which is being endured by more than 14 million members of God’s family in Pakistan.

“Why”, I asked myself, “have you had no compassion for the suffering people of Pakistan?”

As I dug deeper into my thoughts I, to my alarm, found that I was thinking thus:
.
First: that so much relief money is wasted because of corruption.

Second: that Pakistanis are somehow “less worthy” of aid than others.

Third: that despite all the monies we devoted to Haitian people after the 2010 earthquake, not much has gotten better there, so why should we give money to Pakistan?

Then I moved my thinking to another plane.
Here is what I thought:

First: that American politics and politicians are also mired in corruption. Truly we have the best Congress that money can buy.

Second: that “worthiness” is an odd modifier of compassion. Surely a Pakistani baby is as worthy as any new-born in any nation.

Third: that despite all the monies we gave for humanitarian relief in New Orleans after hurricane Katrina in 2005, parts of that City are still blighted and un-restored. The Mayor of that City says that it will be at least another five years before the task is completed

I think that it is perverse of me to condemn the people of Haiti because they have not been able to accomplish in 8 months for their country, what we Americans have been unable to do in 5 years for just one City.

I also know that the suffering  people of Pakistan are as needful of aid as were the citizens of New Orleans.

Sad as it is  I also note that in the Church which I attend, I have not heard one word about the tragedy of the floods in Pakistan.

Posted by J. Michael Povey at Monday, August 23, 2010 No comments: Links to this post