Gifts by and for the idle rich

In Great Britain we write "pyjamas".

The spelling is probably not important  (except that the British are correct (lol).

The word has its roots in Persia.  Wikipedia will tell you all about this.

Who wears pyjamas these days? Not many.  In fact when I moved to SRQ and spent a few nights with my pals Ben and Bruce I emerged one morning wearing them.  Ben stated that he had once seen such garments in a museum!

Ben and I apart there must be a market for pajamas in these United States.  At this time of gift giving I often hear radio advertisements from the Pajamagram Company which offers matching pajamas for all the family.

Horrors!  Who could imagine sitting down for Christmas Day breakfast with Grandma and Grampa, and Mum and Dad, and older sister, and younger brother each wearing matching jammies.

That would put me off my bacon!

What is worse is that Pajamagram company also offers matching p.j's for our cats and dogs.  See:

"Bloody Hell"  as we say in the U.K. -   these are products for the jaded and indolent rich.

(And homeless children sleep under railway bridges).
Posted by J. Michael Povey at Saturday, December 14, 2013 1 comment: Links to this post

From Benjamin Shwarz's review in the New York Times of  the book "The Roar of the Lion.  The untold story of Churchill's World War II speeches",  written by Richard Toye and  published by  Oxford University Press)

"The one unassailable aspect of Churchill's career up to now has been the series of speeches in the darkest days of the war,,,,,

Hisorians and commentators have long declared that these speeches (recognizable in a few key phrases - "blood, toil, tears and sweat" "their finest hour" "so much owed to so many by so few") inspired the British to hold on despite disaster and the threat of invasion, and are therefore of  world-historical significance.......

But, as Richard Toye points out in "The Roar of the Lion" nearly all the evidence supporting the speeches' decisive impact on British morale is derived from retrospective accounts   -  ( i.e " in the post war period  jmp ] and people's memories of  the myth of 1940, a myth promulgated during the war by British propaganda and advanced by Churchill and his supporters, then embraced by Britons who were no doubt  flattered by the image that it projected of them...

Toye, a professor of history at the University of Exeter, demonstrates the unreliability of such retrospective  accounts by citing people who remembered the impact of hearing Churchill on the wireless delivering his post Dunkirk speech, with the vow that Britons "shall fight on the beaches....."

Yet Churchill never did broadcast that speech; it was delivered, unrecorded, only to the House of Commons. (Churchill did make a phonograph recording of the speech - in 1949.)

Indeed, the image of Churchill inspiring a nation huddled around creaking (crackling?)  radios is fundamentally wrong - he delivered most of his speeches to Parliament".

I lived, worked, and voted in Massachusetts for thirty years.

As an expatriate English liberal I liked the generous and mildly progressive government of the Commonwealth of Massachusetts.

As a human being I rejoiced in the physical beauty of my adopted State, especially in the sixteen years in which I lived in the Berkshire Hills of western Massachusetts.

In 2006 I retired and moved to Sarasota in Florida.

As a human being I rejoice in our gorgeous (Lido and Siesta Key) beaches.

As a human being I am grateful for Sarasota's Opera, Ballet, Symphony and Theatre.  We are a cultural mecca.

As an expatriate English liberal I am pissed off by the retrograde and harsh "anti-poor" policies of  the Republican party dominated legislature in Tallahassee.

However on this day (12th Dec 2013) when the outside  temperature in Florida at 9:00 p,m. is 60f, I am more than happy to be domiciled in Florida than in freezing  Massachusetts,

But I have a more than a wee bit of nostalgic admiration for the beauty of the Berkshire County Mt. Greylock as seen in today's icy photo.

Posted by J. Michael Povey at Thursday, December 12, 2013 No comments: Links to this post

The Cuban-American Congresswoman Ileana Ros-Lehtinen had this to say "Sometimes a handshake is just a handshake, but when the leader of the free world shakes the bloody hand of  a ruthless dictator like Raul Castro it becomes a propaganda coup for the tyrant". (Sarasota Herald-Tribune 11th Dec 2013).

For goodness sake shove it Rep. Ros-Lehtinen. Nelson Mandela's funeral was not staged to allow President Obama to snub Raul Castro.  Nor was it arranged so that Pres. Castro could score a propaganda coup.

The funeral was to honour the life and legacy of a man who shook the hands of many enemies, some of whom would have gladly murdered him or had him killed.

Amongst many other things his memorial service was an appropriate venue for simple and common courtesy.

The American President and the Cuban President demonstrated such courtesy at the memorial for a very great man. Good for them.

(1) That President Obama (in common with very many American Presidents) does not have un-bloodied hands.

(2) Many whiney Cuban-American exiles in South East Florida were supporters of that "exemplar of human rights and a gracious servant of the poor"  Fulgencio Batista y Zaldívar. (Look him up -- you will not find his name in a list of Sunday School teachers)

(3) Because many of my Cuban-American, or ( mostly white) Conservative American friends are so defensive and thin skinned I add the customary note that neither has Fidel Castro been an "exemplar of human rights and a gracious servant of the poor".

But I still have to say "for goodness sake shove it Rep. Ros-Lehtinen", and stop whining.

Posted by J. Michael Povey at Wednesday, December 11, 2013 No comments: Links to this post

My dentist, and some humour.

My Sarasota Dentist is great. His name is Dr.Timothy Mercer. His affect is very low key. His skill is of the highest order.

In recent weeks two women have asked me for recommendations for local Dentists. In each case I encouraged them to contact Dr. Mercer.

One of these women is the one who has taken up habitation in  the Condo next to mine.

The owner of that Condo is very sick.  She has been in and out of various hospitals all this year.

The woman who is living there is a friend of the owner.  It's hard to tell whether or not her residence next door is one the up and up, or whether it has dubious elements.  That's not my concern. Family members of the owner know that she is there.

But this woman is (let's say) unfocused, strange, odd, or even flaky.

The other women is my dear Betty M  the octogenarian ex-Marine of whom I have written in previous blog entries.

Betty M is feisty, funny and fit. She shares my wicked sense of humour.

We meet almost every day when I walk Penne.

I saw Dr. Mercer today.  He thanked me for the referral.  My mind was on the woman next door so I exclaimed "oh, she is nuts".

As I drove home I began to think that perhaps Dr. M had seen my wonderful Betty M rather than the woman next door.

I called Betty M and she confirmed that she had accepted my referral and had seen Dr. M.

I told her about my confusion and that I had said "oh, she is nuts", thinking of course of the woman who is living next door, and not of her.

My dear Betty M saw the very funny side of this, and she could not stop laughing.  Now she cannot wait to tell this funny tale to her three children.

Posted by J. Michael Povey at Tuesday, December 10, 2013 2 comments: Links to this post

My coffee this morning with the Archbishop

I enjoyed coffee this morning with Lord and Lady Carey who have been visiting Sarasota from their home in Newbury, U.K.

Lord Carey is also known as the Most Reverend George L Carey.  He was the Archbishop of Canterbury between 1991 and 2002.

I know the Careys better as George and Eileen.  George was one of the Tutors (professors in American parlance) at St. John's Theological College in Nottingham U.K. where I was student between 1972 and 1976.

George went on from St. John's to be the Vicar of St. Nicholas Church in Durham, U.K. , then Principal of Trinity Theological College in my home City of Bristol, then Bishop of Bath and Wells, and finally what we call the ABC  - the Archbishop of Canterbury.

I last saw the Careys in 1999 when I happened to be in England and was able to attend a student and staff reunion in Nottingham.

The Archbishop and his wife have been in the area for a series of events and some preaching at the Church of the Redeemer, a High Church (and thriving) parish in downtown Sarasota.

I rarely attend there because they do not allow the ministry of ordained women.  I set that on one side and took myself to Redeemer for the 9:00 Eucharist yesterday (9th December 2013).

By a stroke of absolute luck I found myself to be in the same pew as Eileen Carey.  Wow!   She and I had a good chat after the service (the Archbishop had been taken on a whistle stop tour of Sunday School classes).

I discovered that the Careys wanted to do a bit of Christmas shopping this morning, so I met them at their hotel and drove them to the nearest Mall.  There we stopped for coffee at Starbucks, and had a gabfest as we caught up with all the news of our lives.

I was never particularly close to George and Eileen at St. John's. But we had a joyous and very loving time together this morning.  That was good!

The attached photo' was taken by a member of the front desk staff at the Hotel.  He took so long to take the pic that I lost my ear to ear grin.  That's why I look so solemn, or as one of my English friends said by e-mail earlier this evening "like prisoner 76448 between two guards!" 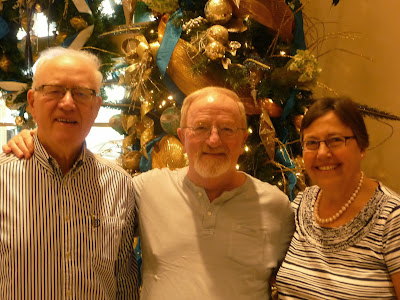 Posted by J. Michael Povey at Sunday, December 08, 2013 No comments: Links to this post