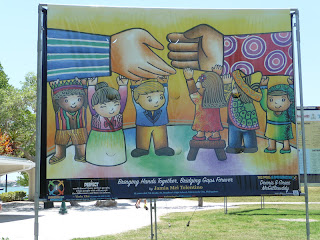 I last enjoyed the "Embracing our Differences" exhibition at Sarasota's bay-front some four years ago.  So it was time to view the 2012 exhibition.

Here are my pictures.

(1.The artwork is from all over the world.  2. The "slogans" are by S.W. Florida school children. 3. The little flaps on the huge vinyl posters are to allow the wind to blow through, lest the entire banner be blown to the ground)


3.Governor Romney’s Mormon faith ought not to be an issue in the General Election.  Let’s vote for him, or not vote for him based on his track record as Governor of Massachusetts and the policies he espouses.

4.Being in favour of same sex marriage should not be described as a “war on marriage”. Gay and Lesbian people are saying that they respect marriage so much that they want it to include them.


5.I know many gay and lesbian people who have been in committed, monogamous, faith-filled relationships for thirty, forty or fifty years.

6.The American Military models so much which is admirable and should be emulated in civilian society.  e.g.


a)The military commitment to affirmative action for racial and other minorities.

b)The honourable and gracious way in which military leaders have responded to the repeal of “don’t ask – don’t tell”. (It is now “safer” to be gay/lesbian in the military than in man…
Post a comment
Read more

Comcast e-mail seems to be dead

The Comcast techies could not help.

May 08, 2012
I was driving west on Stickney Point Road in Sarasota FL this morning.  I was in the right hand lane, all ready to turn right onto Midnight Pass Road.

Traffic was slow in the right hand lane because the South Drawbridge to Siesta Key had just been opened and then closed.

As the traffic began to move, a very zippy green coloured sports car raced up on my left, and then cut me off as it zoomed into the right hand lane just ahead of me.

I noticed two things about this car.

First:  a bumper sticker which read “Just Be Nice”.  I thought “that driving was not very nice!”

Oh no. The reckless driver of this car with its “Just Be Nice” bumper sticker was clearly a member of St. Boniface Church (to which I was driving).

I had imagined that St. Boniface Church members had more gracious standards of behaviour.

“Just Being Nice” is not good enough if selfish driving puts other motorists at risk.

2.Betty Pusey. Her husband Cort Pusey was a retired Priest who served alongside me in Pittsfield, MA 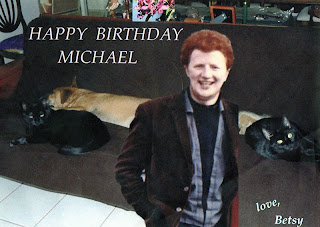 Last Wednesday, May 2nd 2012,  our local newspaper, the Sarasota Herald-Tribune ran a story about a new retail “mall” which is to be developed in Sarasota, on the north east fringe of the County.

This development has been on again/off again every since I moved here in 2006.  The hope was that it would attract upscale stores such as “Nordstrom” and “Neiman Marcus”.

That hope has not been realised (who cares?).  But the developer, one Chuck Madden, was happy to announce that a formerly less favoured retailer, “Saks of 5th Ave” would move its store from its current location in central Sarasota.

That’s a ghastly analogy.   So I wrote a letter to the editor at the Sarasota H-T. It's not that I was hurt by his comments.  It was simply that I was pissed-off by his stupidity. My letter was published today and it reads thus.