October 31, 2009
Few people remember that Florida was a slave State, and later a segregationist State. Segregation was pervasive in Sarasota.   The district known as Newtown bears witness to this. It is a majority black American district. Many whites, gripped with a racism which they do not understand or acknowledge, are “scared” to be in Newtown.  They believe that it is an area of high crime. Statistics of criminality would prove them wrong The incidence of crime in all of Sarasota is not great. Newtown has no more and no less crime than other parts of the City. But whites are never impressed with mere statistics.  They have already decided that crime is rife in black areas.  I spent some time in Newtown this morning.  My purpose was to photograph some of Newtown’s Churches. It’s a cool part of town.

October 30, 2009
About once a quarter I receive a newsletter addressed to “The Revere J. Michael Povey”.

Do I have doppelgangers in numerous towns on the north shore of Massachusetts?

NOT TO WORRY. NO ONE CAN GET IT RIGHT ALL OF THE TIME.

He tells of an Episcopal Parish which was celebrating its Centenary. Said Parish printed a formal invitation to the Centennial celebration. The invitation included a note to visiting Priests regarding their vesture for the event. It read “Clergy: Festal Stoles”.

A good person sent a copy of this centennial invitation to the White House, which was kind enough to respond with a letter of congratulations.

October 29, 2009
My Rector's letter to the Sarasota Herald Tribune newspaper

Regarding the news that the "Vatican welcomes disaffected Anglicans," note that the Archbishop of Canterbury says this is "business as usual." Anglicans and Roman Catholics have been swapping pews for hundreds of years, and on our side we've been enriched by the many thoughtful and courageous clergy and laypersons who have moved to the Episcopal Church from Rome.

The historical struggle of Christianity to get it right has meant that all denominations, especially the Roman Catholic Church, have been "wracked by years of conflict over the interpretation of Scripture" the media ascribe to the modern Anglican Communion. It energizes the whole church to be aware that this is an interesting moment in history.

St. Boniface will keep open its welcome center for people who remain inquisitive about Scripture and think that women and gay people are created in the image of G…
Post a comment
Read more

I warned you that my blog would be eclectic!

October 29, 2009
I am immersed in Doris Kearns Goodwin’s bio of Abraham Lincoln “Team of Rivals” (Simon and Schuster 2005). The more I read about Lincoln, the more I like him.

Goodwin relates that Lincoln was a great raconteur.

He loved to tell the (apocryphal?) tale of Ethan Allen’s visit to England soon after the Revolution. There he was subject to much teasing banter. The British would love to make fun of General George Washington. They obtained a picture of Washington and displayed it in the outhouse, where Mr Allen could not miss it. He did not make mention of it, so is hosts asked him if he had seen the picture.

He retorted that “he thought that it was a very appropriate place for an Englishman to keep it”. His hosts enquired “why?”

Allen responded that “there is nothing that will make an Englishman shit so quick as the sight of General Washington”.
Post a comment
Read more

October 27, 2009
Most Tuesday mornings I hove down to my parish Church, St. Boniface on Siesta Key, Sarasota.

St. Boniface’s Rector, Ted Copeland is a generous man, who welcomes the ministry of a number of we retired Priests, and shares the pulpit and altar with great grace.

At 10:00 a.m. on Tuesdays there is a simple Communion service. Most weeks there are six to eight of us there, lay and ordained Christians.

Those of us who are ordained take turns in presiding at the Eucharist, or delivering a simple homily. I was the homilist today.

One of the “Lesser Saints” in the Episcopal Church is Alfred (the Great), King of the Anglo-Saxons between 871 and 899. His "feast day" is Oct 26th, so I observed it today.

English people of my generation were taught two things about Alfred.

First, that he, after many battles, defeated the Danish (Viking) intruders and established a quasi-English Kingdom.

Second, that when in hiding (before his great victories) he was sheltered by a peasant woman in the mar…
1 comment
Read more

Which Rites? (a piece for the interest of Anglicans)

Sundays are so tiring 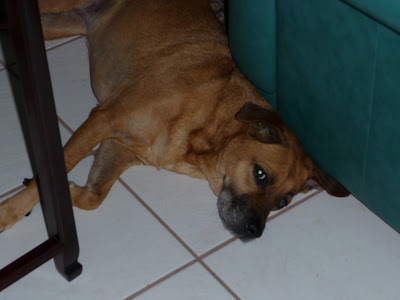 Penne resting with an eye on me


Ada sleeping on the bed in my guest-room

Adelaide dosing on a chair on the Lanai