On being a Parson


My good Rector Ted Copeland at St. Boniface Church, Siesta Key FL retired on May 15th 2011 after 20 years of fabulous ministry.
In these summer months the equally fabulous Assistant Minister, Andrea (Andi) Taylor, is in charge, pending the arrival of an interim Rector.
Andrea has been away from SRQ in recent weeks. She has been leading youth group missions in Honduras, and in New Hampshire.
In her absences, the retired clerics, of whom I am one, have been minding the shop.
It’s fallen to my lot to be the “Priest on Call” this week.
That role led me to take the Holy Communion to two parishioners who are in the Hospital,
That’s “fairly routine” stuff.
Late this afternoon I received an emergency call to visit an older parishioner who is resident in a local Hospice, as she prepares for death.
It was a tough visit, for she did not know me, and I did not know her.
Nonetheless I tried to listen to her fears, and I prayed Psalm 23 and the Lord’s Prayer with her.  Who knows if it helped!
But I was privileged to be the *Parson who prayed with dying woman.
(* In former days in England the C of E Minister in a local parish was known as “The Parson”.  In other words he (and it was always a “he”) was the Person who could be counted upon to baptise children, solemnise marriages, and prayerfully bury the dead.)
This Parson requests your prayers for Sue (the woman I visited) as she moves towards death.
Posted by J. Michael Povey at Saturday, July 02, 2011 No comments: Links to this post

Sweets (3) and final, with some other stuff

My survey of the sweets/candies of my childhood led one reader to ask if I had forgotten “Liquorice Allsorts”.    Truth to tell I had so done.
My reader’s question reminded me of them, a favourite of my childhood and youth.
Mum loved them too, and once ate so many that she became sick.  I could have done the same.
Many of these U.K. sweets are readily available here in the U.S.A.  (at a severely “marked up” price).
Indeed I can buy them at a “British Goods Store” which is less than a mile from my home.  Nonetheless I rarely patronise this shop, partly because the goods are “dear” (“cher” in French!), and partly because the owners are distinctly un-friendly to their patrons. 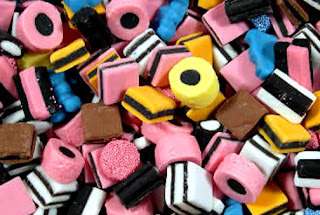 Senior cat Ada has grown to be very fond of my dog Penne.  Ada loves to lay herself down very near to the dog. 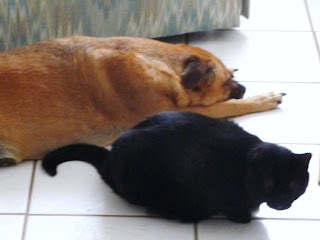 “Do not disturb” is a common enough tag, which we can place on the outside of hotel rooms.  I like this alternative! 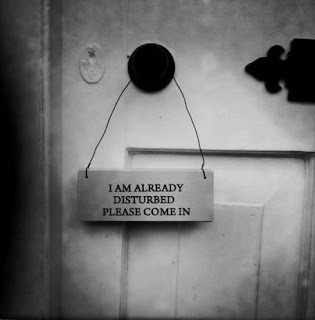 Mad Priest http://www.blogger.com/profile/15120376342802143188 and/or anon commented on  my omission of “Spangles” as I recalled some of the sweets/candies of my childhood and youth.
How could I have forgotten “Spangles” – a hard “fruit flavoured” sweet?  It was always a toss-up as to whether I would suck them to extinction, or crunch them up -  doing dreadful damage to my teeth in the process.  I am told that they are no longer manufactured.
As I recalled “Spangles” my mind went to other favourites of my younger days.
There were Maynard’s Wine Gums. (see http://www.dailymail.co.uk/news/article-1222132/Schoolboy-banned-buying-pack-Wine-Gums--young-drink.html for a giggle.
The Rowntree Company gave us both Fruit Pastilles and Fruit Gums.  The Pastilles were juicier, but the Gums lasted longer.
We had “sherbet” based sweets, of which my parents disapproved.
There were Sherbet Fountains. We sucked up the sherbet powder through a liquorice straw.  From time to time the powder would slink up our noses, causing us to sneeze.
And which British and Commonwealth citizen can forget “Flying Saucers” -  a sweet in which we allowed the outer coating to dissolve in our mouths, thus releasing the tingling powder.
Even “Refreshers” were sherbet based.
See http://www.guardian.co.uk/lifeandstyle/wordofmouth/2010/sep/21/consider-sherbet for more info about “sherbet”.
We ate Tiger Nuts, Sweet Tobacco, Coconut Mushrooms and Fruit Salad (of which the chewy ones were for me far better than the hard ones).
Thanks to the internet I can buy most of the above sweets today on-line.
I most likely will not so do.  For I suspect that the memories of these sweets are better than the sweets themselves.
Please note the second "Spangles" picture, dating from the Coronation of QE II in 1953.   It's a plausible (lol) explanation for my sexuality (!) 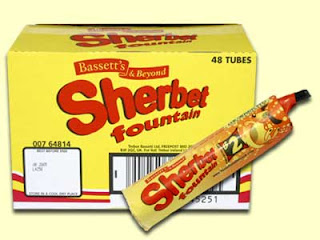 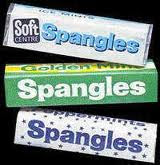 In the “Department of Memory” I recall some of the sweets/candies which were my favourites 60 years ago.
Many of them are still sold in the U.K. and other places.  But I bet that they are not as good nowadays as we thought them to be all those years ago.
U.K. readers and/or U.K. expatriates may wish to respond with details of their favourite sweets from “all them years ago”.

A "mess" for dinner

So I created a recipe for my dinner today.
One can of black beans, drained
One can of garbanzo beans, also drained.
One large sized orange tomato, cut up into small pieces.
Two andouille sausages broiled and also cut into small pieces.
I heated the whole mess in a saucepan.
‘twas neither a soup, nor a stew.
Indeed ‘twas a “mess”
And it was both delicious and nutritious!
Posted by J. Michael Povey at Tuesday, June 28, 2011 No comments: Links to this post