In November 2006, five months after I'd moved to Sarasota, I took a "commercial" cruise on Sarasota Bay.  It was all very fine, but my sense of the geography of the Bay and of its Islands was limited.

So when the BEST group at my Church  (St. Boniface on Siesta Key, Sarasota) announced a Bay cruise for today I signed up.

"BEST" is an acronym for "Boniface Eco-Stewardship Team".

The "cruise" was out of our local Mote Marine Laboratory ( see http://www.mote.org/ ), so the trip had to do with the ecology of the bay.  The "tour guide" on the boat ( an engined Catamaran) was a young marine biologist named Noah.  (We were glad that he was Noah and not Jonah!).

We  were able to enjoy a brief nature walk on a small uninhabited island (Big Edwards Island);

we caught a glimpse of a Dolphin as she/he briefly surfaced (too fast for a photo');

we saw an Osprey nest (built only three weeks ago) -  "Mum" never left the nest so we guessed that she was incubating some eggs -  and we saw "Dad" returning to the next with a fish in his claws;

we enjoyed a slow ride around two other small islands which are "rookeries" (in American English a rookery is a breeding and nesting place for all and sundry birds).  The rookeries we saw are homes for at least 800 breeding pairs of various species, -i.e. 1,600 birds, plus eggs and chicks. There we caught sight of a gorgeous Roseate Spoonbill.  It flitted in and out of the mangroves so I could not get a picture;

we also saw some White Pelicans.  They are unusual in this neck of the woods where brown pelicans prevail.

And we also saw some of the fancy-dancy homes of the rich and famous which adorn the Bay and its islands.

Here are some photo's

Narcissus and the death of the Church.

“Narcissus or Narkissos (Greek: Νάρκισσος), possibly derived from ναρκη (narke) meaning "sleep, numbness," in Greek mythology was a hunter from the territory of Thespiae in Boeotia who was renowned for his beauty. He was exceptionally proud, in that he disdained those who loved him. As divine punishment he fell in love with his own reflection in a pool, not realizing it was merely an image, and he wasted away to death, not being able to leave the beauty of his own reflection.”  (from Wikipedia)
What the legend fails to reveal is that any reflection in a pool is inevitably distorted by the sunlight or lack of sunlight, by the ripples of the water, and by the depth of the pool.
Reflected light always has distortions.
In Christian theology the Church is meant to be a reflection of the glory, compassion, grace, and mercy of God.  Indeed, that’s why there is a Church.  It exists to reflect the goodness of God, NOT to project its own glory!
At its best the Church, with all its flaws, is an imperfect reflection of everything that this good and true about God.
At its worst the Church is in love with its own image, and like Narcissus it  is doomed to die.
The death of the narcissistic Church will be good news for the world.  And when that happens the loving and gracious God will find some other way to disclose her glory, compassion, grace and mercy for the utter well-being of humans and of all creation. 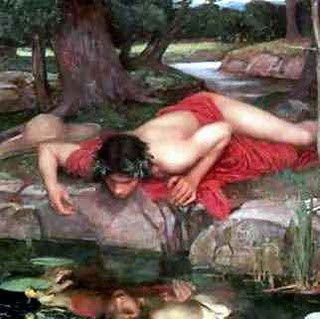 Posted by J. Michael Povey at Friday, March 11, 2011 No comments: Links to this post

Liver and Beethoven (and a follow up to Grrr!)

All out of the blue my Rector told me yesterday morning that St. Boniface would pay the airfare for my trip to Sewanee, on the basis that I will be officially representing the parish in visiting our seminarian Wayne Farrell and his wife Trish!

In town this week are my New Hampshire friends Pat and Jack McLaughlin  (they were parishioners in Pittsfield before they retired to N.H.)

We attended a very fine Symphony Concert  (more about  that later in the week).

Beforehand we dined out.  I went off all my healthy eating habits and ate liver, bacon, and onions with french fries.   That was the first bit of liver I've eaten in at least five years.   It was so goooood!

(The concert was all music by Beethoven.  That was gooood too!)
Posted by J. Michael Povey at Thursday, March 10, 2011 No comments: Links to this post

"National Security - a myth" (or "Are you listening President Obama?")


The same should be said of the “national security” costs in these United States.

It is almost impossible to “suss out” our annual budget for national security, but if the following article is anywhere near the truth it is enormous.

In the meantime, Republicans in the House of Representatives wish to cut some $42 billion from programmes which aid the poor.

… they are also determined to obliviate or hobble the modest reforms to our dysfunctional American health care system (the reforms which have been passed by Congress, but which the Tea Party crew deride as “Obamacare”)

…. meanwhile in many of our 50 States Republican Governors want to slash spending for education; for health care (Medicaid); and for state employee pensions (which in truth are no more than deferred and earned compensation).

So, if the Tea Party/Republican reformers have their way we shall continue to spend huge dollars for national security.

But the poor, the sick, the retirees, the educators, and the school-children will be shafted.


I ask: “what the heck will national security mean if our seniors are reduced to poverty; our sick, frail and ill denied medical care; and our children are ill-educated or un-educated?”

These are just my thoughts about the myths of “national security”.

Are you listening President Obama?
Posted by J. Michael Povey at Wednesday, March 09, 2011 No comments: Links to this post

Sarasota can sometimes feel a wee bit claustrophobic, or restricting. At those times I feel the need to get out of town for a few days, for a change of scenery and of company.

Later this month I will take such a three day/two night trip. I am to visit a small town in Tennessee called Sewanee (it’s west of Chattanooga).

Sewanee is the home of the famed “University of the South”, a place of great learning and prestige.

Sewanee is the only university in the nation that is owned and governed by dioceses of the Episcopal Church, specifically the 28 dioceses of the southeastern United States. With historic roots in the Anglican ecclesiastical and academic traditions, Sewanee welcomes people of all faiths and offers a lively environment for active worship in the Episcopal tradition, which includes a commitment to service and an openness to intellectual discourse.

“The University” (as it is often called) is home to a School of Theology where men and women are trained for ministry in the Episcopal Church.

As it happens, I know four people who are at the School of Theology.

Karen Meridith was a parishioner at St. James’s in Cambridge. She now heads up a fabulous programme for “at distance” learning in the Episcopal Church - it is called “Education for Ministry”.

Tracy Wells Miller was also a St. Jamesian during the time she was a Harvard. Tracy is now a postulant for Holy Orders from the Diocese of Atlanta.

Wayne Farrell is a member of St. Boniface, Siesta Key here in Sarasota. He was recently ordained Deacon. When he graduates later this spring he will be assigned to a parish somewhere here in South West Florida.

The Revd. Ben King teaches Church history at Sewanee. He and I were colleagues in Boston and in Cambridge.

So I’ll take the trip to visit with these good people, and also to enjoy the landscape around Sewanee on what is called the Cumberland Plateau. I am told that it is an area of outstanding natural beauty.

I’ll have a house sitter for the cats and dog, and will fly from nearby St. Petersburg to Chattanooga.

I am using a so-called budget airline. The airfare was inexpensive, but by the time I’d made the reservation I discovered that there were $112 in additional charges (all of course hidden in the small print).

Grrrrr! I wish that the airlines would understand that these additional charges are an utter irritant to most travelers.

They leave us believing that we are being “ripped off” - and so we are! I (and many others) would be much more warmly disposed to both budget and major airlines if they reverted to the good old way of a straightforward fare which included these add-ons.

Grrr again!
Posted by J. Michael Povey at Tuesday, March 08, 2011 No comments: Links to this post

I have been driving over to Sarasota's  Mennonite/Amish enclave called
"Pinecraft" for not a few months, to get some fresh and inexpensive produce at Yoder's Market.


My pal Ben had never been there until today when I introduced him to Yoder's.  He was well pleased with the fruit and vegetables that he purchased.


Next door to Yoder's is the "Big Olaf" Ice Cream parlour.   We wandered there and each enjoyed a huge ice-cream cone.  Mine was "orange and pineapple" flavour. Ben's was "white chocolate with strwberries".


I enjoyed every lick and bite -  all the more so because this was the first bit of ice-cream I'd eaten in much more than a year. (I do not have a well-honed sweet-tooth).


This was for me a delicious pre-Lenten indulgence!


Sarasota (FL), of all places, has a thriving Amish/Mennonite population. We are very used to seeing Amish folks on their big tricycles  (more suitable to an urban environment than their traditional "horse and buggy" means of transportation).


Our local newspaper had a story today about this.  Maybe it will interest you:


Meanwhile, I have sworn off ice cream.  That's no great sacrifice for me.


But my indulgence this afternoon -   that huge ice-cream cone - was a rare treat, and it was delicious to the last lick!


And here is the Big Olaf website  (those Mennonites are "tech-savvy"!)


http://www.wilmasbigolaficecream.com/
Posted by J. Michael Povey at Monday, March 07, 2011 No comments: Links to this post

Posted by J. Michael Povey at Sunday, March 06, 2011 No comments: Links to this post


It was such a joy to be "bathed" in this gorgeous music.  I wanted to be singing with the choir, but as the Presider at this morning's liturgy it was much better that I was simply able to allow the music to "speak" to me and to refresh my soul and spirit.


I congratulate our musician Seth Wertz and the choir for enabling such beauty.


Thompson's Alleluia was a "party piece" for the choir at St. Stephen's in Pittsfield, MA, where I was Rector from 1984-2000.  It was there that I first heard it and began to appreciate it.


Thus it was a gift from St. Stephen's for me.  So as the St. Boniface Choir sang this morning my mind and heart went back to my years in Pittsfield  ( indeed the best [for me] years of my various parish ministries).


Thanks be to G-d for music, for Randall Thompson, for Church Choirs, for St. Stephen's Pittsfield, and now for St. Boniface Church here in Sarasota.


Here's a bit about Randall Thompson.