Does everything happen for a reason? Wisdom from a North Carolina Pastor.

I am a father of two, (Noah and Selah), and husband of one (Jennifer); a 17-year ministry veteran, specializing in trying to live-out the red letters of Jesus.

This is a place where I say stuff that I think needs to be said.

I welcome you to say what you believe needs to be said in response, knowing that ultimately the truth is somewhere in the middle.

Thanks for stopping by, and for reading the pontifications of a flawed, passionate, work in progress.

We’ve all received it personally gift-wrapped by well-meaning friends, caring loved ones, and kind strangers. It usually comes delivered with the most beautiful of intentions; a buffer of hope raised in the face of the unimaginably painful things we sometimes experience in this life.

It’s a close, desperate lifeline thrown out to us when all other words fail:

Everything happens for a reason.

I’ve never had a tremendous amount of peace with the sentiment. I think it gives the terrible stuff too much power, too much poetry; as if there must be nobility and purpose within the brutal devastation we may find ourselves sitting in. In our profound distress, this idea forces us to run down dark, twisted rabbit trails, looking for the specific part of The Greater Plan that this suffering all fits into.

It serves as an emotional distraction, one that cheats us out of the full measure of our real-time grief and outrage. We stutter and stop to try and find the why’s of all of the suffering, instead of just admitting that maybe there is no why to be found and that perhaps this all simply sucks on a grand scale. May you feel permission to fully acknowledge that profound suckness.

Any even if somewhere beneath all of it; far below all the dizzying trauma that we experience here there is a fixed, redemptive reason for it all, it’s one that will likely remain well beyond our understanding so long as we inhabit flesh and blood.

Deep within the background operating system of my faith there’s a buried, fiercely protected trust in a God who is good and in an existence that matters. But this core truth doesn’t come with the assumption that all things, (including all the horrors we might encounter here), have a purpose. It doesn’t come with a hidden silver lining always knitted into the fabric somewhere, if only we can uncover it.

To believe that, is to risk painting the picture of a God who is making us suffer for sport; throwing out obstacle and injury and adversity just to see what we’ll do, just to toughen us up or break us down. I find it hard to reconcile that with the necessary belief in a God who is not out to squash me.

It’s exhausting enough to endure the dark hours here and not lose our religion, without the addition of a Maker who also makes us bleed. Instead, I prefer to understand God as One who bleeds along with us; Who sits with us in our agony and weeps, not causing us our distress but providing a steady, holy presence in it. This still leaves me with the nagging question of why this God can’t or won’t always remove these burdens from me, but it does allow me to better see the open opportunity provided in tragedy.

There’s an oft-misused excerpt from a pastor’s letter to his faith community found in Scripture, where the author Paul writes:


And we know that in all things God works for the good of those who love him, who have been called according to his purpose. Romans 8:28

This isn’t a Heavenly insurance policy paid with faith and exempting us from anything unpleasant, but the promise that if we choose to respond to all things from a place of love and goodness; that we, not necessarily our circumstances will be better for it.

In this way, I believe in suffering as a sacred space; one where we get to choose.

It’s not a supernatural cause-and-effect experiment from the sky, specifically designed to do something to us or in us, but it is a time and place where we can respond and as we do, we are altered. Our pain does not have a predetermined purpose, (otherwise we would be straddled with the terribly complicated task of figuring it out in a billion small decisions every single day), but that pain will always yield valuable fruit.

As much as I hate to admit it, my times of deepest anguish have almost always been the catalyst for my greatest learning, but I could have easily learned different lessons had I chosen differently. Yes, I certainly grew tremendously in those trying times, but I could have grown in another direction altogether with another choice. In that way, those moments of devastation held no single, microscopic needle-in-the-haystack truth to hunt for while I grieved and struggled, but there was still treasure to be found in the making of my choices and in their ripples.

No I don’t believe that everything happens for a reason, but I do believe there is meaning in how we respond to all things that happen to us, even when they are not at all good things.

Be encouraged as you suffer and choose.

Posted by J. Michael Povey at Saturday, June 06, 2015 No comments: Links to this post

My favourite joke was told by the British comedian/actor/singer Alfred Marks. 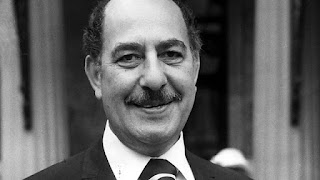 I saw and heard him tell this joke on a British T.V. show some forty years ago.  My youngest brother (Martyn), also remembers the joke.

The "set up" is in the working class areas of east London during WWII  (where many men worked in the old London Docks).

The London Docks were an obvious target for enemy bombs.

The air raid sirens went off.

The male of the household  calls out to his wife.

"Come on me old Dutch, the Sireens  are goin' off, let's get to the shelta".

It may be legal, but is it wise?

This photo' has been going the rounds.  It is, of course, "over the top" - such is the case in all profound and wry humour. 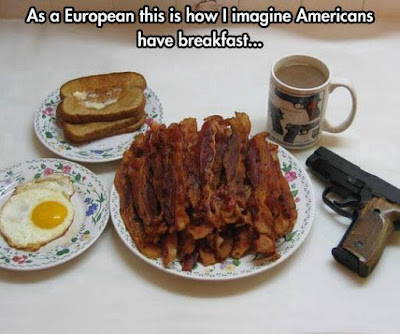 A well regulated militia, being necessary to the security of a free state, the right of the people to keep and bear arms, shall not be infringed.


The big Constitutional question (as addressed at various times by the United States Supreme Court) is framed thus:  "is the governing clause " A well regulated militia", or is it  "the right of the people to keep and bear arms".


In the twenty-first century, the amendment has been subjected to renewed academic inquiry and judicial interest.[11] In District of Columbia v. Heller (2008), the Supreme Court handed down a landmark decision, expressly holding the amendment to protect an individual right to possess and carry firearms;  thus asserting that "the right of the people to bear arms"  is the governing clause.

But that right is not absolute.    The arch-conservative Supreme Court Judge Antonin Scalia added this:

Like most rights, the right secured by the Second Amendment is not unlimited....Although we do not undertake an exhaustive historical analysis today of the full scope of the Second Amendment, nothing in our opinion should be taken to cast doubt on longstanding prohibitions on the possession of firearms by felons and the mentally ill, or laws forbidding the carrying of firearms in sensitive places such as schools and government buildings, or laws imposing conditions and qualifications on the commercial sale of arms.

In the meantime an resident of Atlanta, GA. asserted his rights under the Second Amendment, by carrying an assault rifle  (not just a simple rifle) into Atlanta's Airport.  He did so to assert his legal rights. 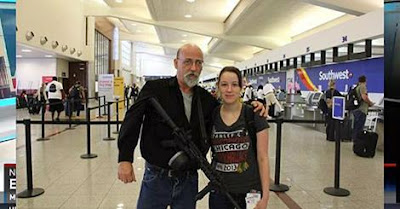 He is  expressing his legal rights. The law seems to be  in his camp.   BUT  "legal rights"  are not necessarily synonymous with the human right to feel safe in pubic places.  Carrying this assault rifle in a public place does not ensure his legal rights.  The Law of the Land, as defined by the Supreme Court does that.

His rights are secured by the Second Amendment, not by carrying an assault rifle in an airport.

Let us hope that Supreme Court Justice Antonin Scalia's caveat regarding the  bearing of arms ( laws forbidding the carrying of firearms in sensitive places such as schools and government buildings,) can be applied to privately owned, but publicly accessible spaces such as Atlanta's Airport.

And I wonder why this assault weapon is deemed by him to be important to his right to self defence.  A simple pistol would do the same,

Posted by J. Michael Povey at Thursday, June 04, 2015 No comments: Links to this post

GRIEF: Wisdom from Anne Lamott - "Learning to dance with the limp etc."

I have been thinking,  and praying about grief, ever since  Savannah G took her own life at aged 20, just eight days ago.

The wonderful Anne Lamott offers wisdom  even as we grieve:

“You will lose someone you can’t live without, and your heart will be badly broken, and the bad news is that you never completely get over the loss of your beloved. But this is also the good news. They live forever in your broken heart that doesn’t seal back up. And you come through. It’s like having a broken leg that never heals perfectly—that still hurts when the weather gets cold, but you learn to dance with the limp.”
― Anne Lamott

“And I felt like my heart had been so thoroughly and irreparably broken that there could be no real joy again, that at best there might eventually be a little contentment. Everyone wanted me to get help and rejoin life, pick up the pieces and move on, and I tried to, I wanted to, but I just had to lie in the mud with my arms wrapped around myself, eyes closed, grieving, until I didn’t have to anymore.”
― Anne Lamott, Operating Instructions: A Journal of My Son's First Year
Posted by J. Michael Povey at Tuesday, June 02, 2015 No comments: Links to this post

Our beloved assistant Rector Andi Taylor, at St. Boniface Church, Siesta Key, FL.   is on the cusp of her well earned sabbatical leave,

That sabbatical will take her (amongst other places) to Lee Abbey, a wonderful retreat Guest House in  Devonshire, England


And to Ireland where she will meet up with her husband and their two sons.

Whilst in England she will stay with the former Director of Music at St. B's, Neil Page, and his wife Sue, at their home in Exeter.

Andi will also stay with my brother Martyn and his wife Wendy in Bristol.  (Andi and her family have twice met Martyn, on the occasions of his visits to me in SRQ.)  (Wendy Povey will be meeting Andi Taylor for the first time, since she (Wendy) has not been able to travel by air to these United States).

We bade "au revoir" to Andi this morning.

In this one she is responding to a Standing Ovation from the Congregation  (yes we love her!), after our Senior Warden had presented her a lovely bouquet of red roses. 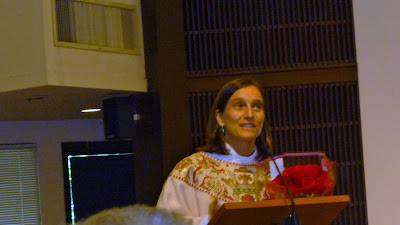 And here is a glorious candid of Andi which I took  just before the service: 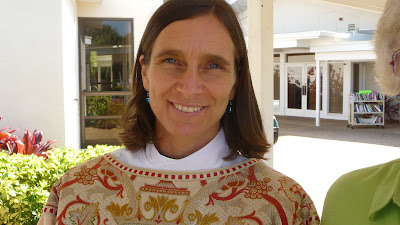