# 2 for today Ridiculous and sublime

I have trained my dog Penny to go to the dictionary, look up words, and then tell me what they mean.

The cats, Ada and Adelaide are also in training. This is for next year’s Sarasota Marathon. They are already excellent sprinters, particularly when they hear the sound of a can being opened.

You probably did not know that I have bought five goldfish. They are in a nice bowl, and I have taught them to sing. Whenever a guest peers into the bowl the gold fish, (Genesis, Exodus, Leviticus, Numbers and Deuteronomy), swim to the surface and sing “Five go-old fish” (adapted from a Christmas Song).

Next to be adopted will be snakes. I’ll get four of them, and teach them to hiss in harmony. I’ll take them on the road when they have mastered the Hallelujah Chorus.

(No, I am not on hallucinogenic drugs. Yes, I should “get a life”.)

Fun, if not sublime.

Adelaide, the junior cat, loves to come and stare at me when I evacuate my bowels each morning. She stares up at me in my enthroned state. And she talks, with a “yowl” kind of mew. This morning I started to mock her by yowling back.

Later, when I returned home after a shopping outing, Penny greeted me with her usual unrestrained joy.

This inevitably happens, even when I have been out of the house for less than ten minutes. And as Penny dances and prances, Adelaide and Ada always come to watch. They are bemused and amused by Penny’s display.

As Penny danced today, Adelaide batted the dog’s tail. An emboldened Penny took off after Adelaide, only to come to a screeching halt when Adelaide stopped and faced Penny, with arched back and hair standing on end. Cats rule!

This afternoon I picked Adelaide up and began to caress her. Penny, witnessing this, immediately hid her head under the sofa.

So, I am “getting a life” with three pets.

This is so new and odd for me, as I have never been a great pet lover.

Posted by J. Michael Povey at Saturday, April 18, 2009 No comments: Links to this post

Susan Boyle and the ratings game. A cynical view.

I hear that there have been 20 million hits on the YouTube video of Susan Boyle’s performance on the T.V. show “Britain’s Got Talent”.
It’s a nice enough video.

48 year old Miss Boyle is a homely woman from Scotland. She sang a more than decent rendering of a song from “Les Mis”. It is fun to see and to hear.

Now “the world” is getting dewy eyed as folks view the video.

But let’s be honest. Miss Boyle is NOT the next Elaine Page. She is simply an apparently dear and sweet woman who can “belt them out”.

So why all the attention?

Maybe because many of us think: “this could be me”.

Maybe because she seems to be a “very decent woman”, in our most indecent world. We believe that we’d rather have a cup of tea with her, than with Gordon Brown or Nicholas Sarkosy.
My cynical side comes into play.

I believe that the “judges” on “Britain’s Got Talent” had been briefed in advance. “Someone” let them know that this is just the sort of act which will gain the show greater ratings as it progresses.


I think that the good Miss Boyle was an innocent player in the miserable ratings game. I believe that “Britain’s Got Talent” is exploiting her for financial reasons.

That being said, I hope that she will not advance to the “finals”.


I also hope that she will get to sing to the Queen if that is her wish.

Posted by J. Michael Povey at Friday, April 17, 2009 No comments: Links to this post

April 15th was the deadline for filing 2008 tax returns in these United States.

(I had filed my tax return long before this date).

All over America there were “Tea Parties”: - gatherings of people to protest taxes. The protests were allegedly spontaneous.


These people were ignorant, wilful and misled.

They were ignorant of history. The original “Boston Tea Party” had to do with taxation without representation. It was not about the very notion of taxation.

They were wilful. They are not against taxation for the military, for national security, and for local protection (police, fire-fighters, courts, prisons etc). But they are opposed to taxation for health care, public education, the arts, relief of poverty, assistance to the mentally and physically disabled .... etc.

They were misled. The protests were not spontaneous. They were carefully arranged and crafted by Republican operatives who are determined to derail any actions by our President.

The anti-tax lunacy may mean that Sarasota’s finest Art Gallery and Theatre will have to close. For they are, in part, funded publically.

If the Ringling Museum and the Asolo Theatre are forced to close, then the tourist stream will dry up.

Will the Republican small business owners, and anti-taxers, then be glad that they have bitten the hand that fed them?
Posted by J. Michael Povey at Thursday, April 16, 2009 1 comment: Links to this post

Nuty stuff via my sister in law Izzy

I want to die in my sleep like my grandfather. Not screaming in terror like the passengers in his car.

Red meat is not bad for you. Fuzzy green meat is.

I am having an out of money experience.

When you work here you can name your own salary. I named mine “Fred”

Money isn’t everything. But it sure keeps the children in touch.

I love cooking with wine. Sometimes I even put it in the food.

Welcome to Utah. Set your clock back 75 years.

In just two days from now, tomorrow will be yesterday.

Reality: An illusion which occurs due to a lack of alcohol.

My short term memory is not as sharp as it used to be.

My short term memory is not as sharp as it used to be.

My short term memory is not as sharp as it used to be.
Posted by J. Michael Povey at Wednesday, April 15, 2009 No comments: Links to this post

'Tis a gift to be simple

It has been raining today:

It’s a big deal. The land is so dry. We need days and days of rain, but this is a good start. Folks are so happy with the rain.

Living in a drought stricken region makes most of us us long for rain.

And it reminds me of those Psalms which rejoice when the early and later rains come to parched earth.

A thunderstorm has lingered over our area for hours. This is good.

And merciful Lord be praised, Penny is not a bit afrighted by thunder and lightning.

I stretched out on my sofa for a mid-afternoon nap.

I could hear the gentle rain.

Thunder rumbled in the distance.

I felt so much at peace, so very comforted.

The radio and T.V. were off (they almost always are).


These lovely sounds – rain, thunder, and clocks were all I needed.


The animals added their benediction. Ada asleep. My lovely Adelaide, posing for her portrait. And Penny – alert as ever. 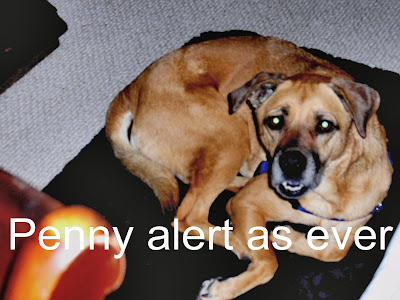 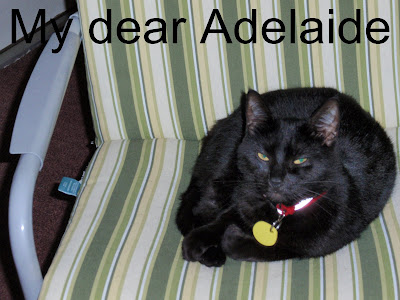 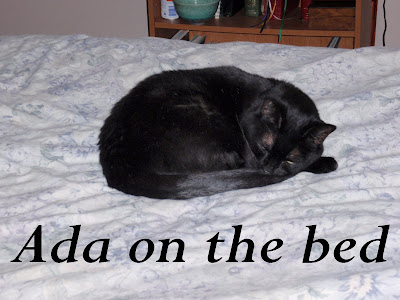 
There are reliable supplies of fresh water.

The streets and roads around here are well paved.

As do the street lights.

Trash and recyclables are picked up every week.


Sarasota also has police, fire, education, planning and library services (to name but a few).


I am glad to pay taxes in a free republic: - taxes which enable these “essentials”.
Posted by J. Michael Povey at Monday, April 13, 2009 No comments: Links to this post

Jesus as a mother

The celebration of Easter is by very definition on a Sunday.

So it was not Easter Sunday today.

In the Church Calendar there are Seven Sundays of Easter, in a Church season, which lasts for 50 days.

My attention was grabbed:


1. By the 9 years old acolyte. She knows every word of the Nicene Creed.

2. By the woman in front of me who was wearing a gorgeous hat pin. I have not seen a hat pin in years.

3. By a lanky 16/17 years old young man, visiting SRQ with his grandparents. Whenever his face relaxed, it relaxed into a smile. His smile made me grin. I told him so after Eucharist, much to the delight of his grandparents.

4. By the little girl (aged maybe 2), with a gorgeous shock of blonde curls. She was entranced by the music of the bell choir. Her very wise father brought her to the front of the Church so that she could admire the bells. She jiggled her head in time with the music.

5. By the child (maybe the same one) who cried out “yeah”, or maybe “hooray” when some music pleased her. She had caught the Easter Spirit.

6. By Katie, (maybe six years old) sitting behind me who was intrigued by the bird portrayed in a stained glass window. “Was it a swan?” she wondered out loud, “or was it a dove?” I told her that it was probably a pelican (**)

There was an ancient legend to the effect that, in times of famine, a pelican would feed its young using its own blood.
While this is not to the best of my knowledge actually true of any pelicans, the story was widely told and is older than Christianity.

Given that such a story was widely known, it makes perfect sense that a pelican became a popular symbol for Christ, and was often found in Christian art.

Wonderful is it not, that ancient Churches saw Jesus as a female Pelican who fed her young from her own breast?

Think about this: Jesus is a Mother, who feeds us from her own breast.

The idea of a feminine and female Christ is very old!
Posted by J. Michael Povey at Sunday, April 12, 2009 No comments: Links to this post