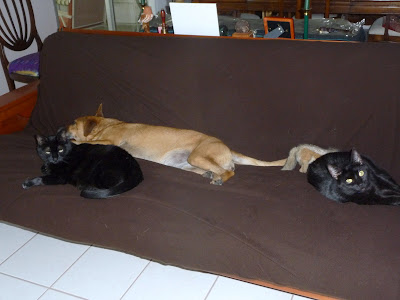 My two cats (Ada on the left, Adelaide on the right) and my darling dog Penne scarcely care for each other!!

Posted by J. Michael Povey at Saturday, July 31, 2010 No comments: Links to this post

“Ecology of a Cracker Childhood” is a fabulous book written by Janisse Ray, and published by Milkweed Editions (1999).
It is an affectionate account of her up-bringing as a “Georgia Cracker” in the small town of Baxley, GA.

She writes with clear love and affection for her parents, grand-parents, and siblings. She tells of their life in the Apostolic Church; of her father’s inventive genius (he ran a scrap-yard); of her amazing and beautiful mother; her tough paternal grandmother; and of the mental illness of both her paternal grandfather, and her father.

She tells of her terrific maternal grand-parents in such a way as would make one long to feast at this grandmother’s table.

Interwoven with these memories, (and integral to her tale), Janisse introduces her readers to the bugs, beasts, and birds; and to the trees, grasses and plants with which she was surrounded in Baxley.'

Janisse Ray speaks of the material poverty of her childhood without shame or embarrassment.

She also celebrates the relational and environmental riches of her up-bringing.

“Georgia Cracker” is the name given to poor whites in that State. (Poor whites in Florida were/are also called Crackers).

Most people assert that this refers to the “crack of the whip” over the oxen which pulled their carts.

But the word was also used by William Shakespeare to indicate a “boaster or braggart – hence a liar”.


And as early as 1766, one G. Cochrane defined “crackers” as those who are “great boasters; ... a lawless set of rascals on the frontiers of Virginia, Maryland, the Carolinas and Georgia, who often change their places of abode”.
Be that as it may I recommend Janisse Ray’s book.

Some months ago I wrote about Ferdie Pacheo’s memoir of growing up in Ybor City (Tampa, FL). I said that it made me nostalgic about a time and place I never knew. Janisse Ray’s book does the same.
Posted by J. Michael Povey at Friday, July 30, 2010 No comments: Links to this post

Fairest Isle, all isles excelling.
Seat of pleasure and of love,
Venus here will choose her dwelling,
And forsake her Cyprian grove.
Cupid from his fav'rite nation,
Care and envy will remove;
Jealousy that poisnous passion,
And despair that dies for love.

Gentle murmers sweet complaining,
Sighs that blow the fire of love,
Soft repulses, kind disdaining,
Shall be all the pains you prove.
Ev'ry swain shall pay his duty,
Grateful ev'ry nymph shall prove;
And as these excel in beauty,
Those shall be renowned for love.
John Dryden wrote these words in the 17th Century.
Henry Purcell set them to music, also in that Century
How amazing to hear these words and music from an oriental choir in the 21st Century!
http://www.youtube.com/watch?v=CrNqSNLQ-Qw&feature=related

Re the Gospel reading for August 1st 2010

The following is from Mike Kinman, Dean of the Episcopal Cathedral in St. Louis,MO (It is reproduced with his permission). He was writing to a parishioner and her husband, whose names I have made anonymous.

"What God promises is that we will have enough to survive But even more than that, God promises enough so that we will be able to share and that God will never leave us. And I have never seen that promise broken. I have been in one of the poorest places on the planet -- Southern Sudan -- and there I found people living on the edge of famine who were completely certain of God's presence with them and took incredible joy in sharing the little food and shelter and water they had.

So a big piece of this for me is . We live surrounded by wealth unimaginable by most of humanity not just in the world today but throughout history ... and yet we report a higher level of anxiety about money than most nations in the world.

And that brings us to the final thing. This is about liberation. God's desire from us is not for us to be charity machines or impoverished, but not to be imprisoned by our wealth. To let go of it and participate in the great joy God knows in giving life and creation to us ... the joy of giving away all that we have. It's the liberation you and Am..t know, A.y -- and how you are raising your kids -- in testifying with your life that your beautiful home is not just for you to enjoy but is to be shared by friends, family, neighbors, , and on and on and on".

Posted by J. Michael Povey at Wednesday, July 28, 2010 No comments: Links to this post

The Divinity of Jesus Revisited

FFr
By my friend and former colleague, the Revd. Dan Weir.   Reproduced with his permission


The Divinity of Jesus Revisited

There have been a few responses – here and on – to my previous post. MadPriest – one of my favorite bloggers – commented on the problem of dualism, “the splitting of the spiritual and the bodily” which leads to seeing matter as inferior to spirit. Dualism is not part of the tradition of Jerusalem, but of Athens, and the witness of the Scriptures is that matter is good. The Christian's hope for eternal life is not for a disembodied life, but for the resurrection of the body."
Another comment focused my thinking on the question of the two natures of Jesus the Christ. Again I see the underlying problem with much of our Christology as a dependence on substantialistic philosophical language. Again its the tradition of Athens that has led us to think in terms of being, rather than of being-with, which is the tradition of Jerusalem. “Does Jesus have two natures?” is wrong question, or, at least, a question that we can't answer. The questions that we can answer are, “Is Jesus one with us in our humanity?” and “Is Jesus Emmanuel God-with-us?” The apostolic witness, with no mention at all of two natures, was that in this human person they met God. In some way, which they could not explain, Jesus was the revelation of the God of Israel, the one true God. We try to explain that at our peril and always get it more or less wrong. We shouldn't stop thinking about God, stop reading and writing theology, but we need to be willing to see where some theology might lead us astray.
What seems to me to be lost in much of the talk about the divinity of Jesus, is that Jesus was – and is – theocentric. The man we meet in the Gospels was centered upon God, upon Abba. He pointed not to himself but to Abba, and unless our Christology is theocentric, rather than christocentric, we are missing the point. Seeing Jesus as the one who perfectly represents God to us and us to God is, I think, much more helpful – and faithful to Scripture – than the two natures Christology. Representation is relational, and not substantialistic, and the Good News is about God's desire to be in relationship with us. While it may border on heresy, my reading of Scripture has led me to believe that God wants to be God only in relationship with us and with all creation. Or, as my friend Fr. Aaron Usher used to say, Jesus invites us to get intimate with the ultimate.
Posted by J. Michael Povey at Tuesday, July 27, 2010 No comments: Links to this post

Anne Hutchinson and my change of mind

One of the great pleasures in retirement is that I have time and to spare to read. I am learning so much!


(I know that I am a better learner via reading and intuition that I ever was in a classroom).

So I have recently  read biographies of Diana Mitford Mosley, Dorothy Parker and Anne Hutchinson, and have reported on them on this blog on previous days.


Of the three, I am most “taken” with Anne Hutchinson.
What I did not mention in my blog about her yesterday is that as well as the unswerving support of her husband (what a remarkable man), there were a few Massachusetts Ministers who supported her, and went into exile with her, or to other places.As I read a biography of Anne Hutchinson


I  asked  “which side would you have been on?”
The J. Michael Povey of 40 years ago would have taken a position against the idea of women’s leadership (over men), within the Church.
Now thanks to such remarkable women as the Revd Gwen W. Sears (a Deacon at St. Stephen’s, Pittsfield during my sixteen years there);

the Revd. Dr. Eleanor McLaughlin (a tough, feisty, unafraid and wise Priest whom I knew in Western Massachusetts);

and the Rt. Reverend Barbara C Harris (the first female Bishop in the Anglican Communion, and “my Bishop” in Cambridge days),


I now rejoice in the leadership of ordained women as Deacon, Priest and Bishop.
More than that, I now have no patience with the Bishop of Rome (a.k.a. the Pope);
or the Conservative Evangelicals and Anglo-Catholics of the Church of England;
or the Evangelical/Fundamentalist Pastors in American Christianity , all of whom are diametrically and angrily opposed to the idea of women as pastors or priests.
I believe that their opposition arises from a narrow and un-historical interpretation of Holy Scripture and of the Tradition of Christianity.

I assert that they are just as dangerous to women as is the most “radical” Muslim Imam.