Au revoir (and a hymn text)

February 19, 2009
There will not be an entry on Povey Prattle for a couple of weeks. "The Pove" will be otherwise engaged.

Look for this blog again on March 6th.

It's been my direction towards hope ever since Hunter Pope died.

1. Will you let me be your servant?
Let me be as Christ to you.
Pray that I might have the grace
to let you be my servant, too.

2. We are pilgrims on a journey.
We are travelers on the road.
We are here to help each other
Walk the mile and bear the load.

3. I will hold the Christ-light for you
in the night time of your fear.
I will hold my hand out to you;
Speak the peace you long to hear.

4. I will weep when you are weeping.
When you laugh, I'll laugh with you.
I will share your joy and sorrow
till we've seen this journey through.

5. When we sing to God in heaven,
We shall find such harmony
Born of all we've known together
Of Christ's love and agony.

6. Will you let me be your servant?
Let me be as Christ to …
1 comment
Read more

Molly Pope - aged 12, twin of Hunter comments on his funeral plans and on the press coverage of Hunter's death

And the news got it all wrong, they took all the wrong information on purpose

When they came to interview us, we told them that it had nothing to do w…
1 comment
Read more 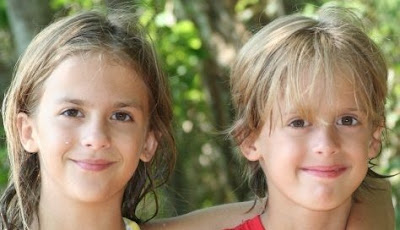 Hunter’s Mom had played her flute at a wedding there. She was so delighted with the Liturgy that soon afterwards she, her husband Ken, and their four children became regular attenders.

In due course I drove from Cambridge, MA to Jamaica Plain, Boston, MA to have dinner with the six Popes: Ken and Tess (parents), Ramsey and Connor (older twins), and Molly and Hunter (younger twins).

It was a jolly evening. Each of the Popes responded to my silly-ness, and laughed alongside me.

Each of them: except for Hunter. He refused to look me in the eye; and refused to giggle with us.

After dinner, Ramsey, Connor, Molly and Hunter took their baths. Then we all went to a bedroom for a story, and for bedtime prayers.

After a bit of romping, Hunter stood up on the top level of a bunk bed.

He looked down, and then said something which I have never forgotten.

A joyful reunion. A ghastly tragedy.

February 16, 2009
A joyful reunion My Brasilian friend Gabriel and I drove to Lakeland, FL (about 70 miles north east of Sarasota) to have lunch with my niece Anne Weston, her husband Stuart and their daughter Olivia. The Westons, from England, are on vacation at Disneyland – which is maybe 40 miles east of Lakeland.
Anne and Stuart had told Olivia that she would be meeting her “crazy Uncle John”. I lived up to that appellation by being silly enough to make Olivia giggle.

I’d officiated in Bristol, England, at Anne and Stuart’s wedding, but had not seen them since my mother’s funeral in 2001. We had a lovely time together today.
jmp, Stuart, Anne, Olivia.

Also in 2001, or maybe it was 2002 a wonderful family joined St. James’s in Cambridge. They were the parents Ken and Tess Pope, and their four children - two sets of twins - Ramsey and Connor, the older boy twins, and Molly and Hunter, the young…
4 comments
Read more

My sermon this morning

I look at my cats. They are each black with those gorgeous greeny-yellow eyes. Their needs seem simple. Food is at the top of their lists, followed by sleep. They are devoted to keeping themselves clean. On occasion they will play, chasing each other around the house, or even better, toying with a hapless lizard which has come indoors by mistake. My cats, Ada and Adelaide can be aloof or clingy. Sometimes they will ignore me, other times they beg for my attention. They like me most when I tickle their ears.

I look at my cats. Then I look at myself. My needs are simple too. Food, shelter, sleep: the occasional bit of play. I sometimes crave company. I often like to be alone.

We look at ourselves. At first blush we are clearly animals. Food, shelter, procreation are at the top of our lists. Some of us are solitary animals, other pr…
1 comment
Read more
More posts