I have retired again, and it feels so good!


Here is the letter I sent about my "second retirement".

It was published in the St. Boniface Church, Sarasota, FL newsletter

After fifty two years of preaching (yes I  began when I was sixteen years old!) I
have advised Bishop Dabney Smith of my  intention to retire from all public ministry  at St. Boniface, and in the other parishes  where I have served as a "supply priest".

I love the Lord and my faith is deep and sweet, but after all these years I
find  the task of sermon preparation and  preaching to be more of a burden than a
joy.

It has been a joy and pleasure to serve  at St. Boniface from the pulpit and at the altar, and I thank you for this privilege.

I look forward to sharing with you in the  worship and service of God, but from the
pews rather than up-front.

Yours sincerely in the Lord Jesus,


"To every thing there is a season, and a time to every purpose under the heaven:"( Ecclesiastes 3:1)
Posted by J. Michael Povey at Saturday, December 08, 2012 No comments: Links to this post

"I am Hutterite" -Book recommendation.


Some years ago I wrote about a couple of Hutterite women who work in a local supermarket, and retain their traditional dress.  This is anomalous since Hutterite people live in “colonies”, and there is no such colony in this neck of the woods.

I had a brief conversation with the older of the two women (it turns out that they are aunt and niece).  She was more than a wee bit surprised that I knew of Jacob Hutter. In common with other Hutterites she is very reserved; therefore I have not pressed her for more of her story.

Last week whilst I was browsing at Sarasota’s Fruitville Library I glimpsed a title, which then caught my attention.

It is a delightfully nuanced memoir about growing up in Hutterite Colonies in Canada: - (New Rosedale and Fairholme, in Manitoba).

Mary-Ann’s parents made the fateful decision to leave the colony and with it everything that was familiar, lovely, and tender. They were also leaving what they believed to be autocratic and arbitrary leadership.

The book speaks of the joys of  life in the colony, and of the struggles and hardships the family endured when they left.

Mary-Ann writes with pure affection about life in the Hutterite community – and of the difficulty of adjusting to life amongst the “English” when her family left.

("English"  is how Hutterites, and also Amish refer to people in the outside world).

(Amish and Hutterite folks refer to others as  “English” , because in both Hutterite and Amish communities older German dialects are the lingua franca).

1. Although Hutterites and Amish trace their origins to the radical wing of the European Reformation they have no common history. (The Amish emerged from the Mennonites when they perceived that the latter were getting too lax!).

2. Hutterites do not “shun” those who choose to leave.

Posted by J. Michael Povey at Friday, December 07, 2012 No comments: Links to this post

Posted by J. Michael Povey at Thursday, December 06, 2012 No comments: Links to this post

The power of suggestion

My good nephew Nick and his fabulous wife Lesley (“Lel”) were in Glasgow, Scotland today to do some Christmas shopping.

Lord alone knows why they travelled the 371 miles from our home City of Bristol, England to get stuff in Glasgow which was probably readily available at home.

Not to worry – “Lel” posted on her Facebook page that she was in line at the station (rail?) to get a “Bacon Sarny”.

This, being interpreted for Americans, means a “Bacon Sandwich”.

The power of suggestion is often irresistible!

Thus, inspired by Lel, I bought some bacon this morning with the intention of having a bacon (plus lettuce and tomato) sandwich for my supper today.

“Fate” intervened, via my friends Ron and Charlotte Thompson. They hosted a magnificent birthday lunch for our mutual friend Bob Lewis.

2 Deliciously spiced pumpkin soup, also made from scratch by Charlotte.

3 A gorgeous salad with blue cheese and pecans.

After the lunch time feast I am fuller than full.

So the BLT will be postponed until Thursday or Friday.

Grant, the artist who created the wonderful painting I posted yesterday is not a Kindergartner.

He is in first grade.

These distinctions are mightily important to six year olds.

Way to go Grant!  ( and his fabulous parents Peter and Ashley, and his younger brother Dalton) 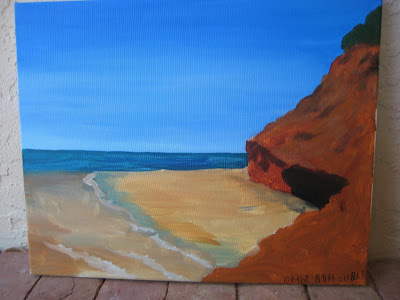 Posted by J. Michael Povey at Tuesday, December 04, 2012 No comments: Links to this post

Here is a painting

Posted by J. Michael Povey at Monday, December 03, 2012 No comments: Links to this post


My good pal Ben and I took ourselves to Sarasota’s  “Van Wezel Performing Arts Hall” for a concert by the Sarasota Orchestra this afternoon (Dec 2nd 2012) at 2:30 p.m.

The Sarasota Orchestra is “as good as they come”.  In fact they are “better than they come” in the smaller American cities such as Sarasota. Maybe they are as good as the “big name” orchestras!

The first offering today was Mozart’s “Jupiter” Symphony (No. 41 in C Major. K 551).  This is Mozart at his very best, and the orchestra played the symphony with wondrous skill, which enabled great beauty. Mozart would have been proud.

After the intermission we heard “The Planets” by Gustav Holst.

I’ve known “The Planets” since I was 12 or 13 years old and in High School.  (Perhaps it was even earlier since my beloved father loved to listen to classical music on the B.B.C.).

But my enjoyment of “The Planets” has ever been on the radio, or via recordings.
Now all these years later I enjoyed it live for the first time.

I was on the edge of my seat as I drank in every note of Holst’s fabulous music. Cool, cool, cool!


1. The woman who sat to my left in the concert hall (I have never met her before), talked to me at the intermission. She asked “did you notice the cellist with red hair?” Indeed I had noticed her.  My seat mate whispered “she is my grand-daughter.” (Warm fuzzy feelings all round!)

2. The Sarasota Orchestra is without a permanent Director/Conductor.  The Guest Conductor this afternoon, Thomas Wilkins, was a hit. The audience adored him

3. Just before the performance of “The Planets” he made a little speech in which he said that the Sarasota Orchestra players are “servant musicians”, and that they are channels of something much greater than themselves.  Wow!  That’s a spiritual/religious concept if ever.

4. A person in the row behind me was wearing a hearing aid which crackled and whistled throughout the concert. It was a bit trying to make tender and passionate love with a mosquito in the bedroom.

Posted by J. Michael Povey at Monday, December 03, 2012 No comments: Links to this post