Vera May Dowden was intensely proud of her Welsh heritage.

She was born in Risca, South Wales, and  was brought as an immigrant to the United States by her Uncle and Aunt when she was a wee child.

It took Vera's parents a few more years to save for their passage and by the time they arrived Vera was deeply bonded to her Aunt and Uncle.

Her Mum and Dad were wise and loving enough to allow this bond to continue.  Thus Vera was raised by her Uncle and Aunt, but was deeply connected to her parents.

Vera had a storied career as an educator.  Her wisdom and integrity led to many advancements so that at the time of her retirement Vera was the Dean of Women at the Worcester (MA) State College. She was held in such great esteem that a Hall of Residence was named in her honour.

She remained single for so many years, and then, in her seventies, married a widower, the Revd. Langford Baldwin.

Thanks to  her nice sense of humour the wedding took place at the eleventh hour of the eleventh day in the eleventh month  -  Armistice Day.  Vera ran up her flag of surrender on that day (I think in 1981).

I thank God for Vera and for all my Welsh friends and friends of Welsh heritage.

Posted by J. Michael Povey at Friday, February 28, 2014 No comments: Links to this post

Here is a photo' of my two older sisters Maureen (with the doll) and Jean; together with my twin sister Elizabeth and me.

Maureen and Jean are already septuagenarians.  Liz and I will be there in a matter of months. 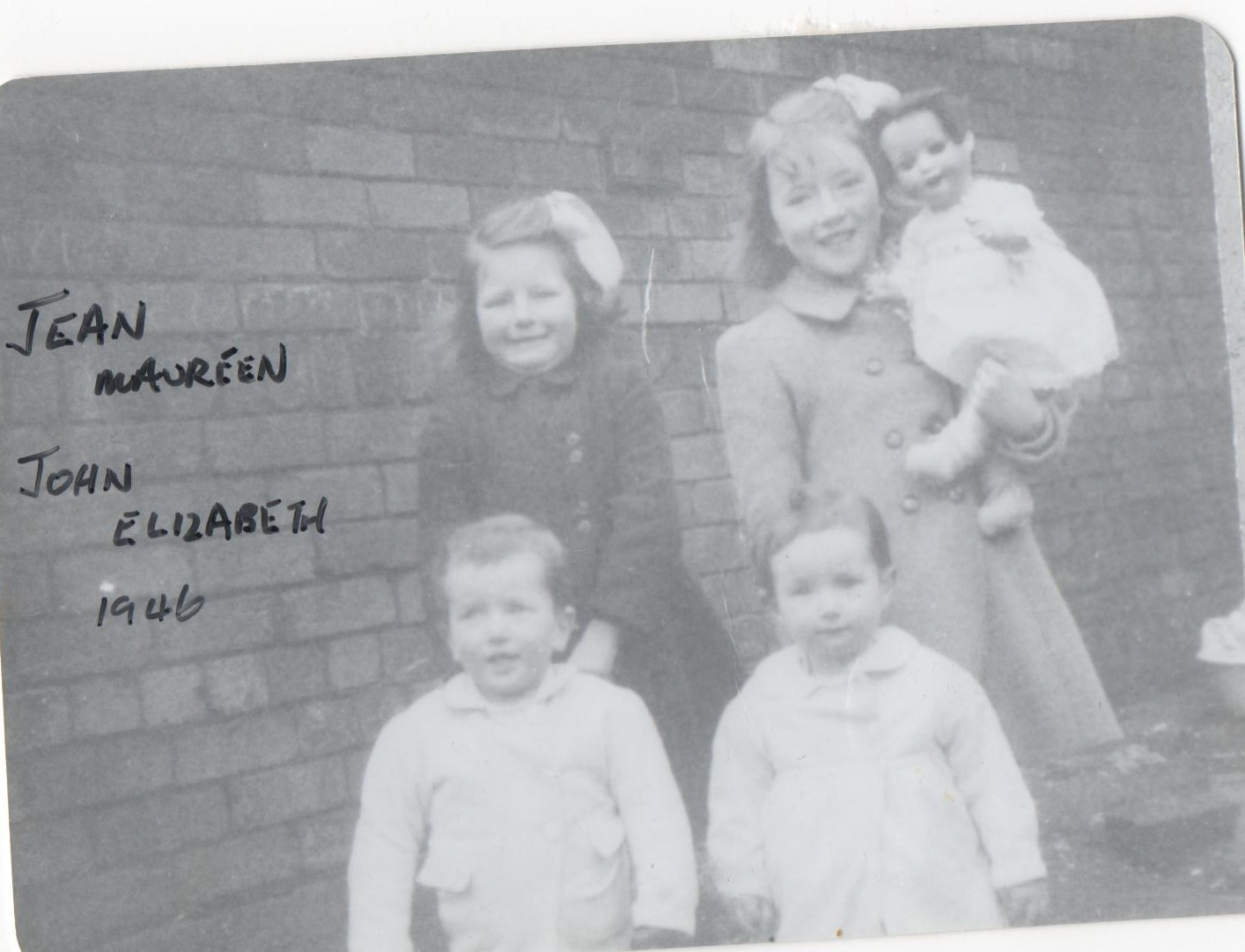 A grim American future - thanks to Republican Party intransigence and stupidity,

1. When the last aquifer is utterly polluted by the water which has been used for fracking.

2.  Every last stream/river is covered with algae and is therefore dead on account of the un-regulated use of phosphate based fertilizers,

3. The oceans are all but dead as a result of  never-ending human-caused  acidification.

4. When as a result of   1-3 above there are severe food shortages, and a death inducing lack of potable water......

3. There is no crisis, but if only former President Barack Obama had introduced legislation to protect the environment we would have voted for it.

4. Despite all this there is no global warming.

6.  Champagne is much better than water.

7. There is no crisis. There is no global warming.  It's all in the head of those left-leaning socialistic democrats.

Labels: Politics and the death of Planet Earth.

Visitors from "up nawth". Reunions, meals, and story telling.


In early February my good friend (and former secretary at St. James's Church, Cambridge, MA) Judy Beers came to SRQ to visit her friends Ron and Char. Judy came to St. Boniface Church with me on February 2nd (I was the preacher).  After Eucharist we toddled back to Ron and Char's home for a super lunch and great conversation.

On Thursday 20th February I drove from SRQ down to Punta Gorda where I had dinner with Joe and Deanne (and their children Faith and Ben) who were on holiday on Marco Island. (Punta Gorda is a half-way point between SRQ and Marco).  I have known Joe since 1980, and Dee from the time that she and Joe were dating.  'Twas a great dinner and a splendid reunion.

Yesterday (24th February 2014) I drove from SRQ to Brandon, FL (a one hour drive) there to have lunch with Tom and Susan Harris who also had a one hour drive from "Disney" to Brandon. Tom and Susan are long term members of St. James's, Cambridge MA.  They have been faithful to that parish through thick and thin  ( since  long before North Cambridge, Porter Square, and South Somerville were "gentrified"  - back in the days when north Cambridge was a bastion of the working classes and the famous local resident Tip O'Neil was a beloved Congressman and a terrific Speaker of the House of Representatives). The Harris's took a break from their vacation at Disney so that we could get together.

It's great to be in an area to which people come for vacations. (In other words, I am glad that I retired to Florida rather than to (e.g.) North Dakota).

I never cease to enjoy these reunions with friends from many places, and from many times is my life.

Sharing in a meal is the most fundamental and important human activity -  in all cultures, in many places, and in all the ages.

As we relax and enjoy those shared meals we tell stories: some about our common experiences, others about our lives apart from each other. This story telling is as important as the meal.

Some of you will remember that I have been fretting about Randi, the wonderful Swedish woman who I've encountered many times on our walks in the neighbourhood.

I fretted because I had not seen Randi in over a year.  I worried because I know that she has a "dickey heart". I wondered if she had died.

(Glen Oaks Gardens consists of four separate three floor  buildings, each with about 48 units.  I could hardly have rung about 192 door bells to find Randi's unit!)

I told her about my impending (May/June) cruise from England to Norway, and she asserted that Norway is much more beautiful than her native Sweden).

Best of all, I now know her last name, and her unit number.  We agreed that we would get together for coffee and cake within the next two weeks.

I am so happy to know that she is still alive.

Posted by J. Michael Povey at Sunday, February 23, 2014 No comments: Links to this post

It was twelve years ago that I was described as being "plump and chubby".

I was visiting my good friends Joe and Dee at their home in Massachusetts.  I had assisted at their wedding and I was pleased to be with them and their children Faith (then 7 or 8 years old, and Ben, aged 3).

I slept in their newly created family room in the basement of their home.

Joe and Dee forewarned me that the three year Ben was more than likely to be up and about before the skylarks, and that proved to be the case.

I was still sleepy, so I asked Ben to sit on the stairs and wait until I was ready to chat.

That he did. But every half-minute or so he let out a deep sigh.  I gave into the inevitable and  invited to sit with me on the edge of the bed and chat.

In the course of this chat the three year old Ben said: "Father Michael, you are really quite plump and chubby".  I almost died with laughter.

That story has entered into the family  lore of  Dee, Joe and their family. It has been told over and over again, and Ben knows it well.

Joe, Dee, Faith and Ben were on holiday at Marco Island here in South West Florida.

We decided to hook up for dinner  in Punta Gorda (roughly half way between Marco and Sarasota).

We did so and had a lovely reunion and meal.

I had decided to wear a name tag.

Joe spotted it first.  He laughed out loud.

I asked him to "keep quiet" for a while.

Some ten or fifteen minutes into dinner young Ben ( now almost 15) spotted my name tag. Now it was his turn to"almost die" with laughter. 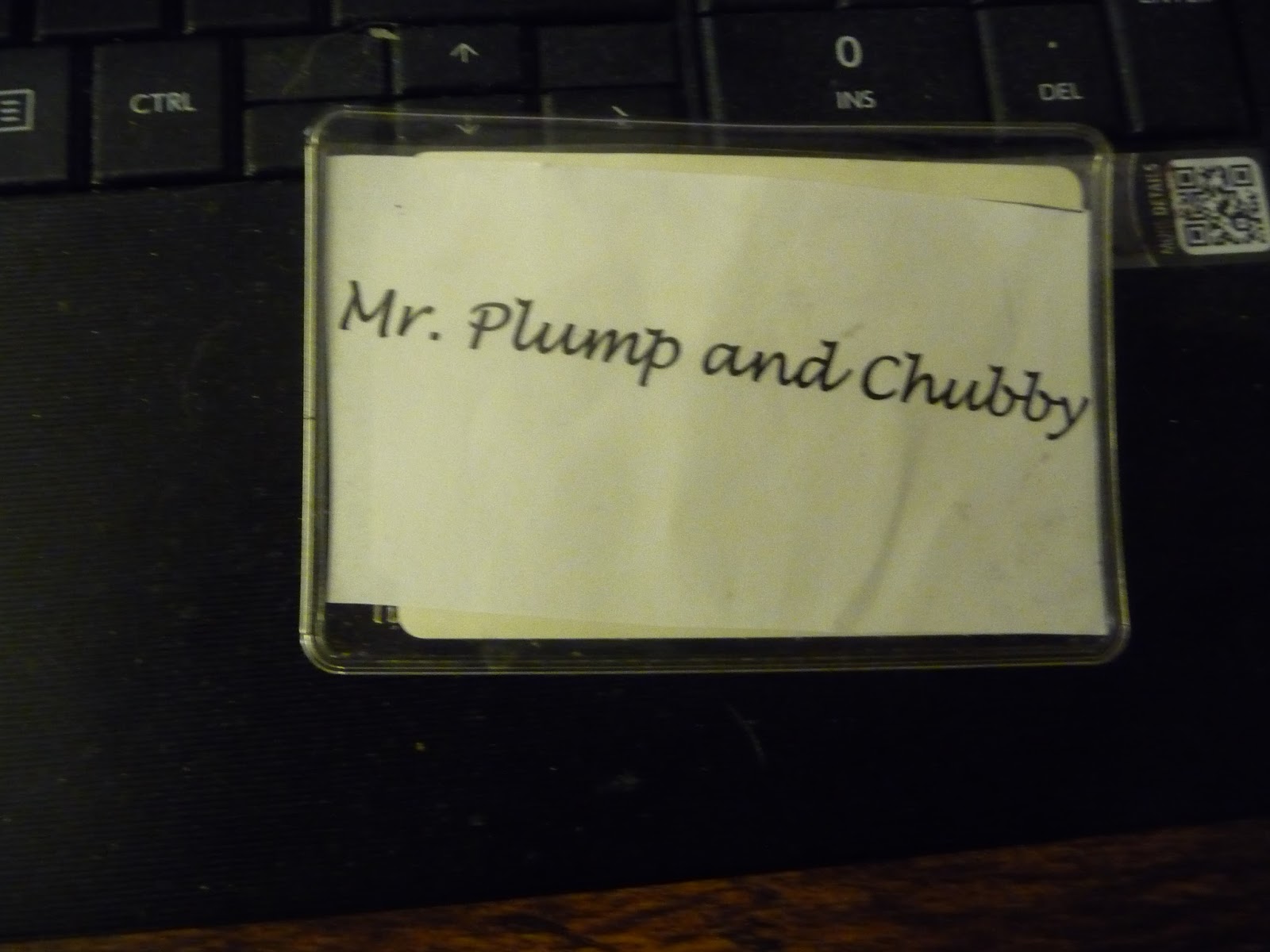 I love being silly!

Posted by J. Michael Povey at Sunday, February 23, 2014 No comments: Links to this post