Some will remember my posting from the 2011 Chalk Festival here in SRQ.

I was back at the 2012 Festival this morning.

I got there early so that I could find a parking space, and avoid the crowds.

("People don't go there anymore. It's too crowded." -Yogi Bera).

It was very much a "work in progress" and I'll probably revisit the Festival on Monday morning to enjoy the completed works.

Here are some of my photo's.

The theme was "Circus" (Sarasota has a rich circus history), but some feline gangstas crept in. There were elephants at each end of the Festival  (think "Circus" again), and most delightfully an area in which children and young people could try their skills. 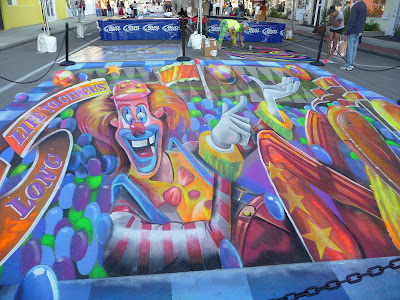 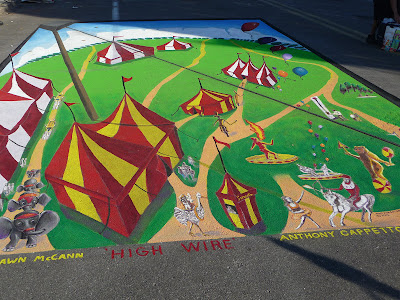 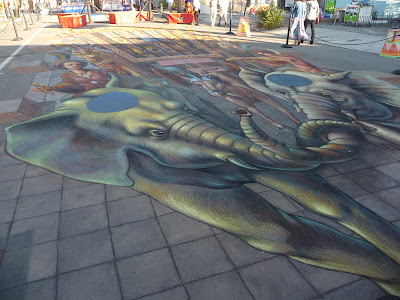 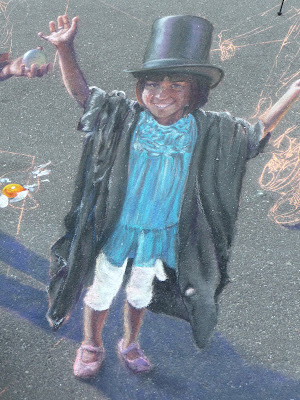 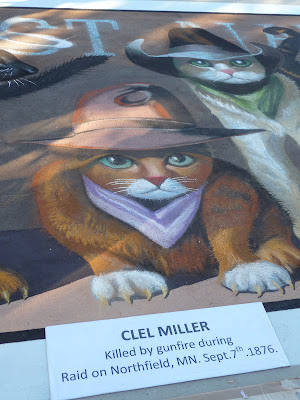 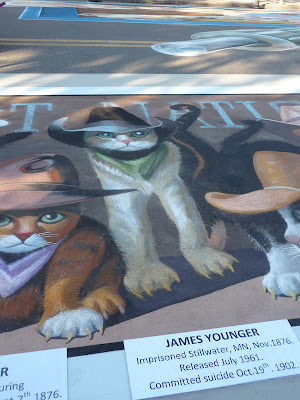 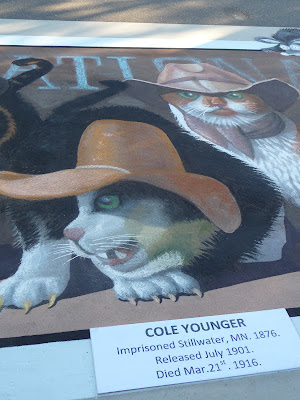 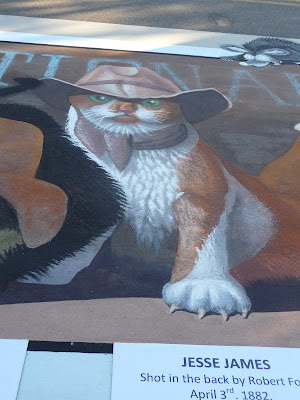 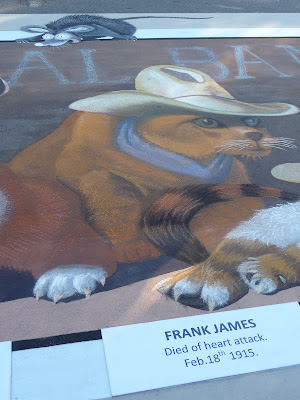 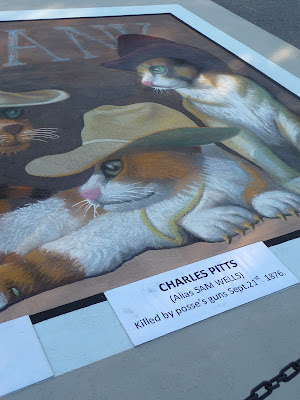 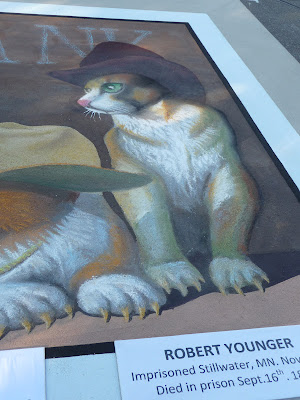 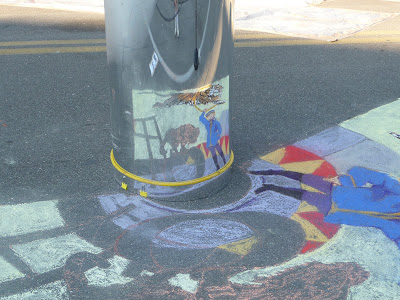 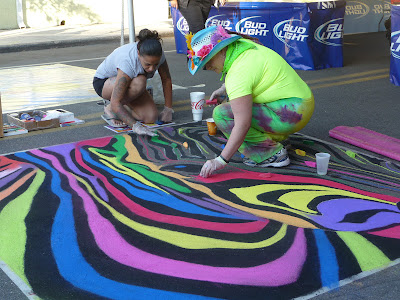 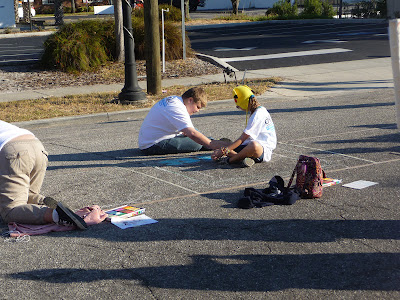 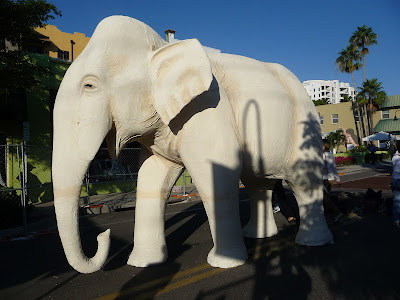 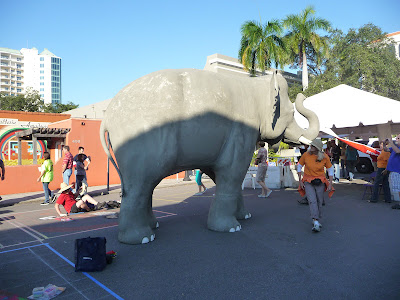 Posted by J. Michael Povey at Saturday, November 03, 2012 No comments: Links to this post


1. Musings. I was taking my postprandial nap today (in this case after lunch) when there was a rap at the door. My fierce guard dog barked her head off, so I went to the door to fend off any local zombies.

The door knocker turned out to be a worker for “the Honeywell Co.” who have been sub-contracted to install new “Smart Meters” on behalf of the Florida Power and Light Company.

It was good that the worker alerted me to the change for, as he explained, I would be without electricity for a few minutes.

Good P.R. from Honeywell and FPL.

But of course I am sure that the FBI is now spying on me via the new meter (tongue in cheek).

2. Odd memories (1). When brother Martyn was here he mentioned that the “Bristol Corporation” (the civic provider of services in Bristol U.K. in the days before Maggie Thatcher screwed things up) used to provide Bristol  residents with hessian sacks in which to recycle newspapers.

I had scarcely remembered this, but just as Martyn mentioned the sacks I could smell them.

Smells are a good source of memory.

3. Odd memories (2). The other day I recalled that Magistrates and Justices of the Peace in the U.K. are sometimes referred to as “The Beak” (e.g.. “He/She was up before the Beak”.)

Why did this memory come back to me after so many years?

And why “The Beak”?:  Is this a teasing reference to the “big noses” of Magistrates/J.P.’s  ---  in the sense that they are sticking their noses into our affairs?

As I walked out this morning I encountered another regular walker. Her name is Dorothy.

I asked her about some local snow-birds saying “are Don and Victoria back?”

Dorothy smiled, and without missing a beat responded with “yes. Bob and Virginia are back”.

Sweet!  Dorothy knew that when I said “Don and Victoria” I was in fact referring to “Bob and Virginia”.

Posted by J. Michael Povey at Friday, November 02, 2012 No comments: Links to this post

If I had any choice in the matter I would live in the Parkville area of Melbourne, AU.


There I would own a single story “Victorian” house.

I’d take the local tram down to the Queen Victoria Market every day to buy fresh produce, fish and meat.

The same tram would take me to within walking distance of St. Paul’s Anglican Cathedral for Evensong.

Ah well. Sarasota is not too bad (opera, theatre, symphony, beaches, state parks etc), but my memories of Melbourne are precious.

Those memories were re-ignited today when my Parkville friend, the Revd. Dr. Andrew McGowan posted a Facebook entry about the death of the family dog “Goldy”, at aged about 16.

When I stayed in Parkville with the McGowan’s last year, Goldy and I hit it off, and she became a blessed substitute for my lovely Penne. I think of her with enormous fondness.

At first Calvin did nothing more than to bark at me. But he changed his habits once he discovered that I was more than willing to take him for long walks.  Then we became “dear friends”..  We enjoyed many walks.

Here is a photo’of Goldy and Calvin:  Woof, Woof.

I would love to be able to return to Melbourne.  It’s a great City

A house divided against itself 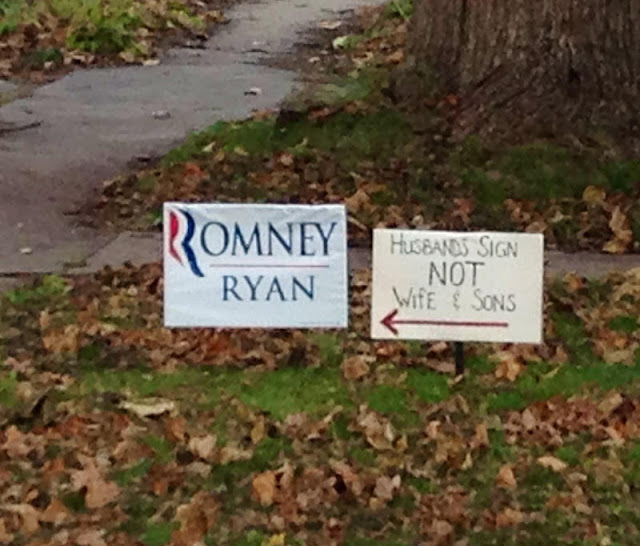 Via my colleague Mark E.
Posted by J. Michael Povey at Wednesday, October 31, 2012 No comments: Links to this post

The shitty tricks of lying Republicans,


1. For readers outside of the U.K..  We have what is called “early voting” in these United States.

2. .In Florida this means that we could vote in the General Election staring last Saturday (27th Oct 2012).

3. I decided to do so today, mostly because the Florida/Sarasota County ballot included so many initiatives that the ballot covered four pages.

It seemed wiser to vote today than to stand in long lines on Election Day itself (Nov 6th).

I voted at Sarasota’s North Library in Newtown.


There were no long lines, but there was a steady stream of voters.

4. Non-Americans will be surprised to learn that there were six or seven choices for President/Vice President.

My conscience urged me to vote for the Green Party candidates. My temporising self prevailed and I voted for our current leaders, who have disappointed me on so many levels, (chiefly the immoral “drones” which kill so many hapless children in Muslim lands).

5. But better Obama/Biden than Romney/Ryan (who like the British leaders Cameron and Clegg seem to have no other convictions than that they should be in power)

7. The Repugs have offered 12 amendments to the Florida Constitution.

8. Some of the proposed amendments had to do with adjustments to our property taxes. I voted against these amendments on the basis that taxation rates should be based on local needs, not on Repubglican ideology and certainly not as Constitutional amendments.

9. Much more dangerously the Florida Repuglicans want us to vote to “recall” three Florida Supreme Justices whose rulings have offended Repubglican sensitivities.  This is bullshite, against which I had to vote.  Thanks be to goodness a very conservative blog has “ruled” that these three Justices are not “liberal activists”, and that they should be retained. May it so be, If not, justice in FL will be held hostage to the obscenely rich Repuglicans,

Posted by J. Michael Povey at Tuesday, October 30, 2012 No comments: Links to this post


1. Once, when I lived in Pittsfield,  Hurricane Gloria came up the east coast.  We all got prepared.  The hurricane fizzled out over Long Island. The Channel 22 (Springfield, MA) meteorologist was utterly disappointed.

Hurricanes are dangerous and I worry for my friend “up nawth”  (cousin Kippy and her husband have been mandatorily evacuated from their home on Staten Island).

But the weather people on T.V. are driving me crazy.  It “seems” as if they wish this to be a major catastrophe.  I am sure that they are fine forecasters but I wish that they would tone down the hype. The United Kingdom has its Jimmy Saville hype.  We have the hurricane and the election. It’s all so wearisome.
No hurricane in FL, but we are getting cold air on the backside of the storm.

2. The Opera Season is back in SRQ. Ben, Bob and I enjoyed Rigoletto (by Verdi) this afternoon.  Some fine melodies and great choruses.  We sat in cheaper seats in “the gods”. Sound and sight were fine, but oh so many stairs! I am now at the age at which I hang on to stair rails even if I think that I do not need them.

3. My former colleague Ellen White posted this picture of the Country Store in Weston, VT.  I’ve been there many times. Ah New England, I miss you so much.

Posted by J. Michael Povey at Sunday, October 28, 2012 No comments: Links to this post