My Dermatological Surgeon has me in stitches

Posted by J. Michael Povey at Saturday, October 13, 2012 No comments: Links to this post

My brother Martyn, his son Sam, and Sam's pal Toby were here for two weeks in September.

Here is the nice thank you note I received from Sam and Toby. 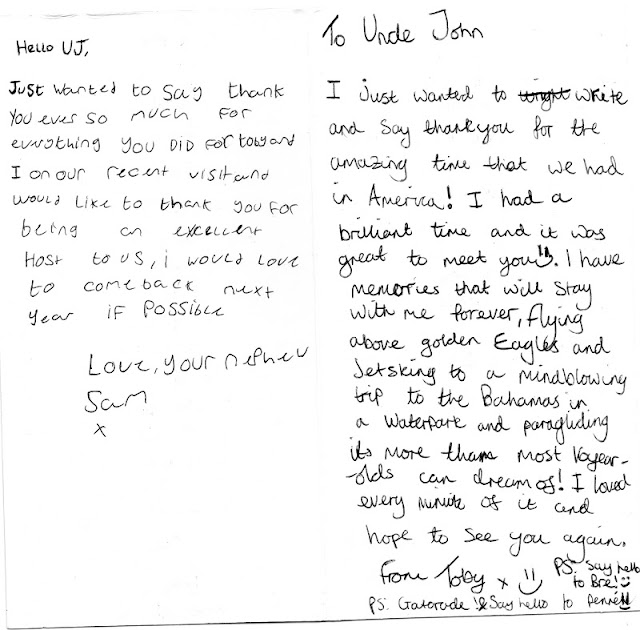 Posted by J. Michael Povey at Friday, October 12, 2012 No comments: Links to this post

And I say to myself - what a wonderful world


I was at http://www.imgacademies.com/ today in the dining room as a guest of my good friends Kay and Barbara.

Our mutual friend Bob joined us for lunch.

The food was good.  Better still were the local water fowl – some utterly gorgeous roseate spoonbills, an anhinga, and an osprey who was enjoying his/her fish lunch on a barren tree. (And there was a big fat turtle).

Here are the pics.


Posted by J. Michael Povey at Thursday, October 11, 2012 No comments: Links to this post

Fundamentalist Christian, Jewish and Muslim expressions of faith have much in common with regard to their attitudes and beliefs about women. They are dangerous peas in a pod.


Here is a story from my experience.


He used to be a guest at the homeless shelter where I am a chaplain. He is now working full time so we do not see him at the shelter.

He "loves Jesus" and all that crap.

I bumped into him downtown the other week as I left the library.

He asked if I officiated at weddings. I replied in the affirmative. He said that he and his “old lady” (I hate that term) wanted to get married.

I agreed to talk to the couple.

When I talked by ‘phone to the intended bride she expressed a wee bit of surprise that he had begun to make wedding plans without first talking with her.

In subsequent conversations with her she revealed that he often got very angry, and that scared her.  She also told me that he had once hit her.

Of course I said that I would not officiate at a wedding given such knowledge.  That was the least of my concerns.

I am deeply concerned for her.  I suggested to her that I should talk with both of them, but she demurred, saying that I should not raise the matter of his anger.

I urged her to go to our local women’s resource center for counsel and advice.

I told her of my fear that I would see their names in the newspaper after she had been assaulted (a real possibility n’est pas?)

She said that the only way she could end the relationship would be to disappear;  to do a moonlight flit.

The saddest thing she said was that he could be so loving and caring after one of his angry outbursts.

Dear Lord above I’ve heard that story so many times. “He abuses me, but then he is so kind”.

I am powerless to do any more.  I pray for her every day.  And I pray that he will repent of his abusive behaviour, and take the steps to deal with his anger.

But I am not counting on it.

Posted by J. Michael Povey at Wednesday, October 10, 2012 No comments: Links to this post

The unholy alliance between Christian fundamentalists and the Republican party.


In these United States there is an un-holy alliance between the “Tea  Party”  (the tail which is wagging the Republican Dog), and the Fundamentalist/Evangelical Churches.

That alliance seeks to put women in their place –  a place of submission under men.

Sadly enough even some men who claim to be religiously or politically “liberal” are tyrants in their own homes or churches. I know some of them.

The idea of male supremacy has a wee bit of backing in the christian scriptures: see “Wives, submit to your husbands, as is fitting in the Lord” (Colossians 3:18).

But many Tea Party/Republican/ Evangelical leaders disdain the second part of the verse viz: “as is fitting in the Lord”.

In so doing they have endorsed a Christian version of Muslim Sharia law.

It makes me both sad and angry that my evangelical and/or republican friends have sold their souls to the devil of male supremacy.

This fundamentalist/muslim/christian/republican party ideology leads to enormous violence against women.  I will write about this tomorrow.

Posted by J. Michael Povey at Tuesday, October 09, 2012 No comments: Links to this post

All over and done in 2 1/2 hours at a pretty fancy surgical office on south trail in SRQ  (opposite the Honda dealership).

"They" said that "we got it all".   I bled quite a bit cos the squamous cell carcinoma had placed itself on top of an artery.

Pressure bandage for 48 hours, then simple bandages (plasters in UK) until the stitches come out  next week.

Thanks for love and prayers.
Posted by J. Michael Povey at Tuesday, October 09, 2012 No comments: Links to this post

My Moh's surgery has been brought forward from October 18th to October 9th.  Yippee
Posted by J. Michael Povey at Monday, October 08, 2012 No comments: Links to this post

Our local newspaper had a story today about the sale of a property in the nearby Glen Oaks Manor.

The story included a picture of Lloyd Paine, the owner, with his dog "Basil".


Posted by J. Michael Povey at Sunday, October 07, 2012 No comments: Links to this post