From one who formerly did not enjoy pets

I have an important role in the life of my dog Penne.  I am her chief haunch scratcher.  She will stand by me for as long as I wish, provided that I give her hind quarters a heavy and prolonged scratching, and it’s even better for her if I use a brush.
Once in a while I persuade her to show me her front end. Then I’ll hold her head between my hands and massage it, and her ears.  She’s then in heaven, and lets out a moan of appreciation.  It’s like an “uummm” which comes from her throat.
Speaking of which, I have to give her a pill every day. She is glad to let me open her jaws and place the pill at the back of her throat.  Then I close her jaw, massage her neck, and she swallows the pill without a word of protest on her part.
Similarly, when I have to clean the inside of her ears (fortunately “they” now make wipes for this) – she allows me to do this without any fuss.   It’s almost as if she “knows” that this is good for her.
She and I were walking out today.
We happened upon my neighbours Ron and Lee as they were driving home.  Penne knows these guys as she sometimes boards with them when I have to be away for more than half a day.  They stopped their car, and Penne went from window to window, her tail all a-wagging as she greeted her “friends”.
Then she reverted to her old neuroses, and pressed her body hard against my leg.  I believe that she had the passing thought that I might leave her there and then. Ron and Lee like Penne, and she is very good when she stays in their home.
But her body language was pretty clear today. It expressed “don’t leave me Daddy”
(or maybe I am projecting these thoughts on to Penne!).
Senior cat Ada loves to be brushed.  If she sees the grooming brush in my hand she mews, then races towards me, happy to anticipate a good “brush-massage”.  If I leave the brush near her bed she rubs her body against it, purring with delight.
That’s good.
What’s not so good is that Ada will try to scarf down any canned dog food which I’ve set out for Penne.  After her “gobble-fest” on dog food she immediately throws it up.  You and I might have thought that some feline instinct would have taught her to avoid the dog food.
On the other hand, you and I might also have thought that humans would have learned to avoid the unhealthy food as served by friend chicken and/or hamburger joints.
Junior cat Adelaide is the feistiest of my pets. Each morning when I crawl out of bed she greets me with the yowly miaows which tell me that I should open the front door so that she can sit out in my front porch.
Similarly she yowls without relief at about 3:30 p.m. each day, knowing that I will set out her afternoon treat of a tablespoon-full of wet food at about 4:00 p.m.
She and Ada also get a morning treat of a wee bit of wet food.
This morning Adelaide was nowhere to be seen at “feline breakfast time”.
I have a theory that cats are able to de-materialise and re-materialise at will, so I was not concerned -  that is until I noticed a gap in one of the mosquito screens in my porch.
Then I realised that Adelaide had bolted for freedom, and was outside – hunting for lizards and frogs.
There was nothing to do about this other than to wait for the return of the prodigal. To assist in this return I left the porch door ajar.
Sure enough, Adelaide came home about an hour later.  She snuck/sneaked in through the semi-opened door looking a little “sheepish”.
(That led me to wonder if sheep are ever “catty”).
Hey pals.  Surely we all (canines, felines, or humans) know that “home is where the food is”)
Posted by J. Michael Povey at Saturday, October 01, 2011 No comments: Links to this post

The Rev. Dean Taylor is a priest in the Episcopal Church whose “ministry brief” states, “It is my deepest belief that every human being born on the planet is a beloved child of God.”
His current Interim Ministry year at St. James, Marietta, Georgia, follows a 20 year rectorship at St. Mark’s in Dalton, Georgia, and Assistantships in St. Francis-in-the-Fields, Louisville, and Church of the Advent in Nashville. “What a joy it has been,” he says, “to see, on Face Book, those teenagers that I not only baptized as babies, but whose parents I married!”
Interim Ministry marks a new phase in his ordained ministry, with each new assignment a unique challenge and adventure. “That interim year,” he says, “can be a very fruitful time of parish self examination and lots and lots of celebration of who you are as a parish.” Preaching, teaching, and pastoral care—“listening with care the wonder to the other person’s journey”—remain the favorite aspects of his ministry.
Taylor was an English Major at the University of the South in Sewanee, Tennessee, and worked as a newspaper reporter and then teacher/coach before entering Virginia Theological Seminary. His hometown is Eufaula, Alabama.
He has three grown (and employed!) children: Charlie, a recent graduate of Environmental Law at the University of Hawaii; Conner, a sales representative of United Wine Distributors in Atlanta; and Lucy, a counselor in the  S.U.W.S. Teen Wilderness Therapy Program in Ashville, North Carolina.
Interests and hobbies include cello, white-water canoeing, hiking, biking, and an occasional golf game with his younger brother. (“My ministry of golf,” he states, “is to make others feel better about their game.”) Future “Bucket List” entries include sea kayaking, and learning to sail.
Posted by J. Michael Povey at Friday, September 30, 2011 No comments: Links to this post

1.   Three of us at St. Boniface Church, Sarasota FL (Andrea Taylor, Assistant Rector; Barbara Roth-Donaldson, Assistant Organist; and I) are fans of the Boston Red Sox.
(Andrea [Andi] served parishes in Belmont and Lexington, MA; Barbara was the organist at Trinity Episcopal Church in Newton, MA; and I served at St. James’s in Cambridge).
I will never understand the algorithms of what Americans call “Major League Baseball -  except that each year the champions of the American League play the champions of the National League in what is modestly called ‘The World Series”.
(How the teams get to be ‘champions’ involves all manner of weird and wonderful exercises in the voodoo which is called “wild card”).
Anyway, last night our beloved Boston Red Sox “blew it”: meaning that they are out of contention for anything worthwhile in the 2011 baseball season.
So Andi, Barbara, and I had a sob feast this morning at Church, even though I have attended only one Red Sox game, and I have no understanding of the mysteries of baseball.  It was my professional duty to mourn alongside Andi and Barbara.
And the truth is that Red Sox fans are never happier than when they are given cause to moan about the failures of their team.


--------------------------------------------------------------
2.    Aldo Bari is the maintenance man for the folks at Glen Oaks Manor (the somewhat snooty community which adjoins my community:  Glen Oaks Ridge).
Aldo is in his mid twenties.  He is a student of architecture who does handyman work to pay his college bills.
He’s done some work for me. I’d rate him as a craftsman more than as a handyman.
Aldo is from Argentina. He will become an American citizen in early October.
He hailed me the other morning as I walked with Penne.  He asked “do you like Rugby?” I responded truthfully.
“Aldo”, I said, “I am not very interested in any sports”.
Aldo said “England just beat Argentina in a Rugby match”.
I responded: “in that case I am a great fan of Rugby”.
Laughter all round.
Posted by J. Michael Povey at Thursday, September 29, 2011 No comments: Links to this post

Labels: This and that: Tongue in cheek

This is an apple 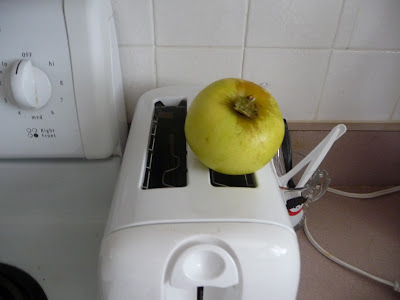 I bought this apple yesterday.  It's from the 2011 New York State crop.

It's been brought down to Florida just as it is.  Why  -  there's even a leaf attached.

An un-waxed, unpolished, recently harvested apple with a bit of the leaf left on!   Who'd have thought it possible to buy such an apple in Florida.  I like it!


(from one who misses very  many good things in the north eastern United States, especially in autumn the proximity of apple orchards).
Posted by J. Michael Povey at Wednesday, September 28, 2011 No comments: Links to this post

The cat sat on the.....
In my walks with Penne I sometimes see a woman who takes her two cats for a walk in a baby buggy/push chair.  It is a charming sight.
I happened upon her today with my camera in hand.  With her permission I took the following photo’s.
When I said “it’s very sweet for you to do this for your cats”, she responded with “well, they’ve got to get their fresh air haven’t they?” 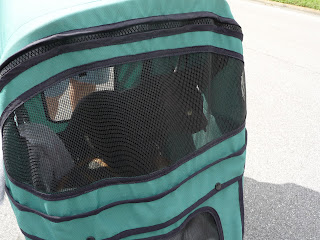 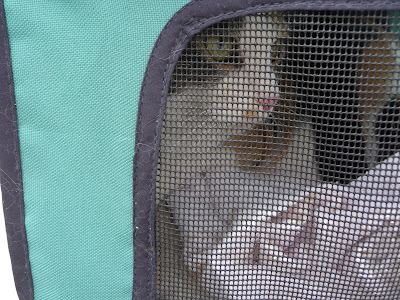 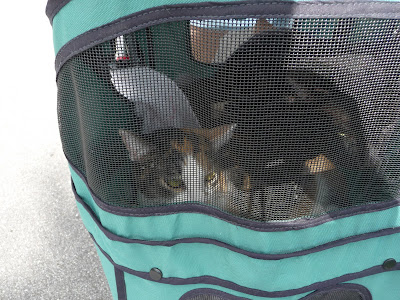 Posted by J. Michael Povey at Tuesday, September 27, 2011 No comments: Links to this post

Nothing today
Posted by J. Michael Povey at Monday, September 26, 2011 No comments: Links to this post

I often have to “force myself” to leave my home.  You see, I am perfectly contented to be alone at home with my books, my dog, and my cats.
Yet I understand that this can be dangerous.
All alone I can get in to stinking thinking, which will lead me to a modicum of self pity, and to more than a trace of misanthropic thinking.
Thus it was today. I took myself to the 8:00 a.m. Eucharist at my parish Church where I was slated to assist our fabulous assistant rector, the Revd. Andrea Taylor.
That being done I wanted to spend the balance of the day alone.
But I had promised to meet a good friend for lunch up in Tampa, where he lives.
My “isolationist” tendency came into full force. I thought of a thousand and one reasons why the 55 mile drive to Tampa would be impossible.  I was sorely tempted to call my pal and to re-schedule our lunch.
But, home from Church, and after a nap I decided that I would resist all the temptations to isolate.
So I went to Tampa.  I met my good friend. (Sadly his girl-friend could not join us).
Over lunch I rejoiced in his wisdom, his knowledge, and his integrity.
He knows very much about the Arab world and about Islam. I was therefore privileged to soak up his wisdom and knowledge.
It was a fabulous encounter.  So now I am pleased that I resisted the “easy way” of staying alone at home.
I always do better when I move from isolation into community.
P.S.   This young friend is the oldest child of my colleague from Cambridge MA days:- the Revd. Steve Bons-y, and of Steve’s incredibly wise wife Elisabeth K-ller.
Posted by J. Michael Povey at Sunday, September 25, 2011 No comments: Links to this post