This is how the London Guardian's cartoonist Steve Bell views the St. Paul's Cathedral/Occupy London stand-off. 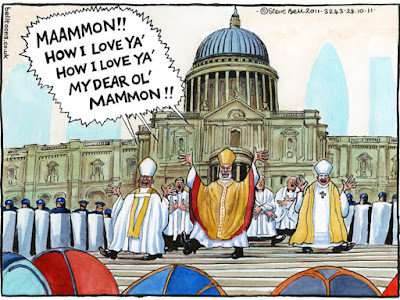 Posted by J. Michael Povey at Friday, October 28, 2011 No comments: Links to this post

There's been a bit of minor crime in "Glen Oaks Estates" which borders my community  "Glen Oaks Ridge".

If the Church were faithful to Jesus'  subversive message of the Kingdom of God then such a sign would be posted outside every Church building. 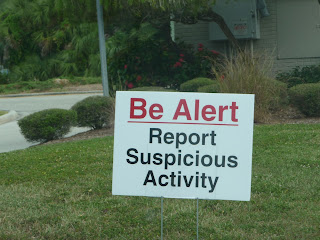 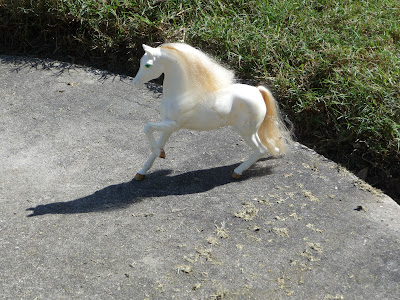 Truly, I saw this horse today.  It was set up near a road in my neighbourhood, quite far from any houses.

I could not resist taking a photo'.  But I could not find a Princess. 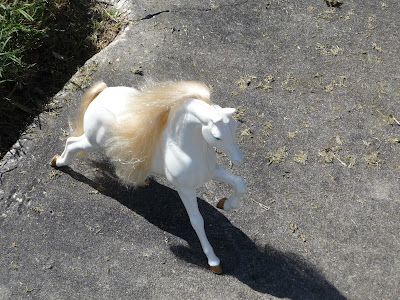 Posted by J. Michael Povey at Wednesday, October 26, 2011 No comments: Links to this post

I’ve had a couple of good reads.
First there was “The Girl from Foreign” by Sadia Shepard (Penguin Press 2008).
The author, Sadia Shepard,  grew up in a middle class Muslim home in a Boston suburb.  Her mother was from Pakistan. Her father was an American from the mid-west – who grew up as an Episcopalian, and adopted Islam upon his marriage.  Sadia’s beloved Pakistani grand-mother also lived with them.
Grand-mother had been the third wife of a wealthy Pakistani businessman.  She was originally from India, and was born Jewish and adopted Islam when she married and moved to Karachi.
[This grand-mother had been a part of the “Bene Israel” community of western India (see below note (1)].
Sadia Shepard received a Fulbright scholarship and went to India for a year to trace her grand-mother’s Jewish heritage, and to connect with the dwindling Bene Israel community.  She also took a side trip to Pakistan for a family wedding.
She writes about the tangled web of familial and religious heritages with enormous respect and admiration for her Grand-mother – an Islamic Jew.
------------------------------------------------------------------
Then I read “In my Brother’s Image” by Eugene L. Pogany (Pengin Press 2000).
Eugene Pogany tells the story of his father Miklos and his uncle Gyuri, (identical twins from Hungary) born in 1913.
Their parents Bela and Gabriella were Hungarian Jews who had converted to Catholicism. Gabriella becomes a “devout Catholic”.
Bela, who served in the Hungarian Army during World War I as a veterinarian, was at heart sceptical about both faiths.
The twin brothers were baptised as Christians, and became “true believers”.
Uncle Gyuri became a Roman Catholic Priest.
Miklos (the author’s father), remained in Budapest got a job in a bank, and married a Jewish woman “Muci”.
Bela died before the outrages of both Hungarian and German Nazism.
Gabriella was put to death in a concentration camp, for despite her pious Catholic faith, she has “Jewish Blood”.
The Priest brother Gyuri escaped the horrors of Nazism.  He spent the war years in Italy where became a protégé of the (in) famous Padre Pio. In due course he emigrated to the U.S.A. and became the parish priest for Hungarian Catholics in the Newark, N.J. area.
Miklos and Muci were both interned in prison camps, and barely escaped with their lives. After the war they moved at first to Sweden and then to the United States.
Miklos was angered, disgusted and horrified by the failure of his adopted Catholic Church in Hungary to resist anti-Semitism: -  so much so that he returned to the Jewish faith of his ancestors.
He and his wife Muci raised their children in the Jewish faith and traditions.
The identical Hungarian twin brothers were eventually reunited in New Jersey.
As they talk, Miklos is scathing in his criticisms of the Hungarian Roman Catholic Church, and its failure to resist anti-Semitism.
Gyuri (the Priest) defends his Church with passion.
But there was a shock in store for him.
He ministered to Hungarian Catholics who had fled to the United States after the failed Hungarian revolution against the Soviets (1956).  But some of those émigrés, now in freedom, began a whispering campaign against him as “the Jew Priest”.
======================================
“In my Brother’s Image” by Eugene L. Pogany (Penguin Press 2000) is a powerful and compelling tale of family, religion, and heritage.  It’s an honest story which reveals the ugly side of religious and nationalistic prejudices.  I recommended it.
I also recommend “The Girl from Foreign” by Sadia Shepard (Penguin Press 2008).
Both are stories for our own nationalistic and myopic times.
( ref (1)  http://en.wikipedia.org/wiki/Bene_Israel )
Posted by J. Michael Povey at Monday, October 24, 2011 1 comment: Links to this post

The Revd. J. Michael Povey at All Angels by the Sea, Longboat Key, Florida.

My beloved speaks and says to me:
‘Arise, my love, my fair one,
and come away;
for now the winter is past,
the rain is over and gone.
The flowers appear on the earth;
the time of singing has come,
and the voice of the turtle-dove
is heard in our land.
The fig tree puts forth its figs,
and the vines are in blossom;
they give forth fragrance.
Arise, my love, my fair one,
and come away.
Set me as a seal upon your heart,
as a seal upon your arm;
for love is strong as death,
passion fierce as the grave.
Its flashes are flashes of fire,
a raging flame.
Many waters cannot quench love,
neither can floods drown it.
If one offered for love
all the wealth of one’s house,
it would be utterly scorned.
Who needs a love letter from you?   Your spouse of many years? A favourite aunt?  A darling grandchild?  Your in-laws?  A friend from fifty years ago?
Write it this afternoon.
Note (!)
THE
HEART OF THE PURITAN
SELECTIONS FROM LETTERS AND
JOURNALS
EDITED BY
ELIZABETH DEERING HANSCOM, PH. D.
PROFESSOR OF ENGLISH IN SMITH COLLEGE
New York
THE MACMILLAN COMPANY
1917
Note (2) Taken from the internet source “The Poetry Foundation”
Posted by J. Michael Povey at Sunday, October 23, 2011 No comments: Links to this post