St. Boniface Church Siesta Key, and being good for less than $21,

I have never been a great fan of local parish church fund-raisers.

By these I mean chiefly the jumble sales (U.K) and rummage sales (U.S.A.) which churches sponsor in order to raise a few bucks (or a few quid) for the parish budget.

The “jumble/rummage” sale mentality seems to me to demean the meaning of the Christian message and hope.

I wonder: “Should the good news of G-d’s realm be underwritten by the miserly pennies of non-believers who come to church sales?”

A rung or two above the jumble/rummage sales are the parish fairs. These usually take place in the month or two before Christmas.

In lively parishes they evoke a great deal of “support”, and many hours of work from Church members.

Truth to tell, they “bring people together”.

Yet they rarely realise more money than say 3% - 4% of the church budget.

As a Rector I was duty bound to support such efforts. But I was never able to get excited about them.


I am sure that my lack of excitement arose from my Plymouth Brethren background. In the “P.B’s” it would have been unthinkable to suggest that any part of the local Church budget be dependent on fund raising from non-members. In this I think that they were correct.

Nonetheless earlier today I took myself to my Church, St. Boniface on Siesta Key, for our “Global Gift Fair”. I trolled down to the Church partly to relieve my boredom, and partly to demonstrate that I am a “good egg”.

I bought some “fair trade” coffee, some “environmentally healthy” house cleaning material, and a name tag holder (which, if I use it, will save the waste of a new paper name tag each Sunday).

Thus, having justified myself, I returned home with that “inner glow” arising from the fact that I had done something which was useful to both the “environment” and to my parish.

Cats and the second coming of Jesus.

My cats have to stay indoors.  This is partly because the rules of the Condo. Association specify that outdoor cats must be on a leash, (have you ever tried that!), and partly because there are outdoors creatures which could be a danger to unwary cats (e.g. possums, hawks – but luckily no alligators in my neck of the woods).

Ada, the senior cat has never shown the slightest interest in being outdoors.

Adelaide, the junior cat would sprint outside, given the slightest moment of inattention on my part when I am opening the front or back door.

She’s done so a few times, but I have been more careful since the day I saw my neighbour (a human) chasing Adelaide, with great oral vigour and with threatened violence.

This same neighbour has a habit of being angry with the mail-man,  the landscapers, the FedEx and UPS delivery staff, the trash collectors -    the list goes on and on, ending with “Old Uncle Tom Cobley and me”.

She, my next door neighbour, has asserted in her most mild rages that I am a “dumb British person”, an “ a..hole”, and an “arrogant preacher man who should kiss her ass”.

I can ignore her diatribes (indeed after more than three years of harassment I will not even speak to her), but my cat might not be so lucky.  I suspect that, given the opportunity, my neighbour is capable of inflicting G.B.H. on Adelaide.

It’s fairly easy to keep Adelaide indoors, but I cannot curb or end her nocturnal hunting instincts.  Last night she awakened me as she played noisy games with her toy mouse.

That wasn’t too bad but on the previous night she decided at about 3:00 a.m. to “hunt” the window curtains behind my bed.  She succeeded in bringing the curtains to the ground, together with the curtain rail.

As a result of this lively activity I was aroused from a deep sleep.  For a moment I was tempted to believe that the crashing noise had something to do with the Lord Jesus descending from heaven with a shout and the voice of an archangel.

When I realised that it was something far more important, i.e. Adelaide’s hunting instincts, I muttered “good cat” and tried to get back to sleep.

Posted by J. Michael Povey at Friday, November 13, 2009 No comments: Links to this post

Black Americans should "get over it" ?

From time to time we are in semi-awe as we listen to a friend or a public speaker, whose family heritage reaches back to the settlement of Jamestown, or to the Mayflower, or perhaps to the Revolutionary War and the establishment of these United States. We are impressed with their lineage.

Or maybe we are “wowed” as we listen to an Irish/Polish/Italian American whose immigrant ancestors faced daunting hardship and poverty in the “old countries” and came to these United States only to face yet more hardship and anti-immigrant discrimination.

We are spellbound as we hear the tales of the Italian Great Grandmother who was widowed at a young age, yet managed to “put three kids through College”; or of the Irish-American ancestor who found that many jobs or apartments were off limits (“Irish may not apply”) yet still managed to “make it”. We think “what amazing stories!”

We rightly rejoice in the tales of the men who grew up in rural poverty during the 1930’s Great Depression, went off to fight in Europe or the Pacific leaving wives to work in war time heavy industry, and returned to get a College degree via the G.I. Bill.


These are all heritages, lineages, histories which we honour and celebrate.

But when an African-American tells tales of her family heritage of slavery, “Jim Crow” laws, lynching, segregation, discrimination, and the fight for full civil rights we respond: “That’s all in the past, get over  it”.
Posted by J. Michael Povey at Thursday, November 12, 2009 No comments: Links to this post

It is not this simple!

The following question was recently posted on Face Book.

Should people in the military be allowed to smoke and drink?

In that form, the question is impossible to answer.

It begs so many other questions.

Here are a few:

Should members of the Armed Forces be allowed to smoke and drink:

when on patrol or military  engagement in Iraq or Afghanistan?

The simplistic question does not deal with these complexities. Nor does it recognise the fact that whatever the military “brass” rules, some members of the Armed Forces will continue to smoke and drink.

I extend this thought to the matter of abortion, a matter which also evokes many simplistic responses.

It seems clear to me that:

3.      Whatever folks on the right or left say, there will be abortions, legal or illegal.

4.      Some abortions will be a matter of medical imperative.

5.      Those of us who are Christian Pastors can be at one and the same time pro-choice, and anti-abortion.

Posted by J. Michael Povey at Wednesday, November 11, 2009 No comments: Links to this post 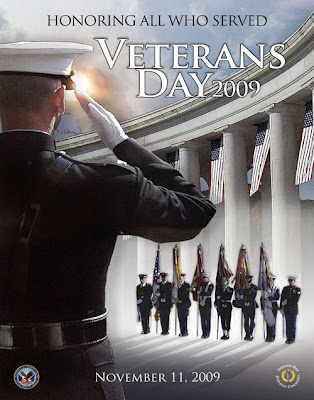 Posted by J. Michael Povey at Tuesday, November 10, 2009 No comments: Links to this post

I suspect that G-d is bored with our silly prayers. Maybe she even despises them.
Nonetheless we utter them.  And it is probably better if we pray “something” rather than “nothing”.
So I prayed today.  I prayed about Hurricane Ida.
I asked that Ida would move close enough to our S.W. Florida coast to bring us much needed rain.
I added that I wanted Ida to miss New Orleans.
And that Ida would not spawn tornadoes in the Florida panhandle, especially in Pensacola where good friends of mine live.
That’s quite a tall order!  Maybe my silly prayers were wafted away by the winds before they reached whatever we mean by G-d.
Soon after lunch I drove down to Sarasota’s Lido Beach, hoping to see that Ida had generated some fine surf.
There was a wee bit of surf.  There were one or two surf riders.  There were sea birds which gathered in a platoon, or slept.
I walked the beach for a bit.  I was disappointed that the surf was less than dramatic.  But I was happy to walk a breezy and  balmy beach in November. 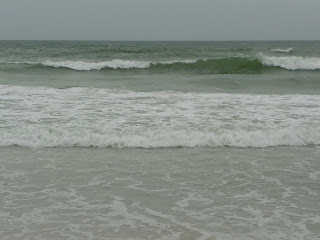 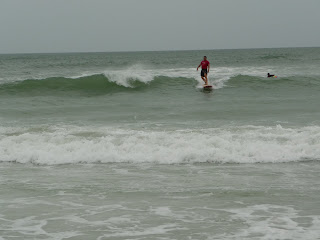 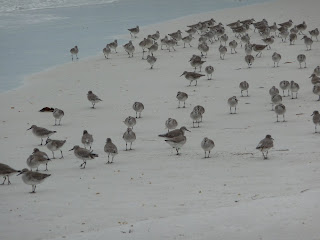 Birds in the breeze 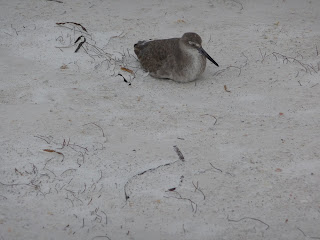 I have a couple of mantras. One is “There is no secular world”. This was given me by Bishop Mark Hollingsworth of the Diocese of Ohio.

The other is one that I have picked up along the way. I express it thus: “Church is not complete until the children are present”. I refuse to see children as “cute” optional-extras in the congregation. I believe that they are an essential part of any Church.


About once a month I attend All Angels by the Sea Episcopal Church on Longboat Key. I like the congregation and I admire the Rector.

Longboat Key is lovely community. It attracts home owners of considerable wealth. Many of them are retired. Only 40% of the community is year round, the balance being retired “snow birds”. So we see very few children at All Angels.

There was a wee lad in Church today. I found out that his name is Julian. He is from Brooklyn, N.Y. and he was on the Key with his Mom to visit his Grandma.

Julian was maybe five or six years old. When he arrived in Church with his Mom and Grandma he was immediately “shushed”. (That was a pity as there is nothing better in Church than the background chatter of children!).

Julian knelt down on the floor with his back to the Altar so that he could do some crayoning, using the seat of his chair to rest his paper and crayons. I could therefore see his face and admire his crayoning. He has a great sense of colour and geometric patterns.

Our eyes met a few times. Each time he would avert his, and return to his crayoning.

I was amused to see that as he concentrated, so his tongue stuck out just a little bit. (We grown-ups do this too! There is something about close and concentrated work that lead us to stick out the tip of our tongue, as if this would in some way help our concentration).

Julian got bolder in his attention to me. I began to make silly faces, and to jiggle my head in nutty ways. That got him to grin from ear to ear.

After communion, with his mother’s permission, I gave him one of the hard candies I had stashed in my jacket pocket.

At the end of the service I introduced myself to Julian and told him my name. I added that I was sure that he and I would like each other very much. I gave him another candy.

A few seconds later another parishioner asked Julian who had given him the candy. “Michael” he replied in a strong tone, as if to say: “everyone knows that Michael hands out candy”.

Julian had not received the bread and wine at the Eucharist. But I want to think that the two pieces of candy which I gave him, and which he enjoyed so much, were a kind of Holy Communion.
Posted by J. Michael Povey at Sunday, November 08, 2009 No comments: Links to this post