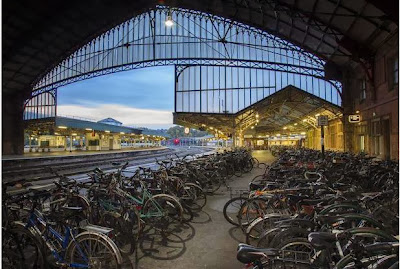 My hometown newspaper the Bristol Post (formerly the Bristol Evening Post)  reported on a photographic competition called "24 hours in Bristol".

Here is the winning photo'  . (Bristol Temple Meads Station is one of the many  wonderful Victorian Railway Stations in the U.K.)

First prize went to Andy Coffin, from Bristol, for his photo called Temple Meads Station 2, which showed bikes left at the railway station by morning commuters.

A spokesman from the city’s tourism organisation Destination Bristol said: “Bristol is the UK’s first cycle city with a large majority of its workers commuting by bicycle.

“Bristol also has an indelible industrial past, with Brunel at its helm.

“The image of the cycles against the backdrop of Temple Meads sums up the mornings here in Bristol. 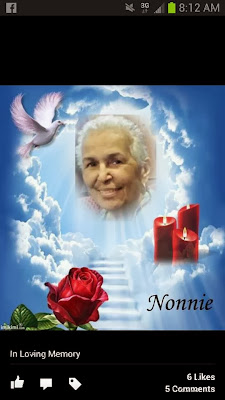 Barbara Ann (Frye) Hanger 1937 - 2014 On Saturday November 16th at St. Stephen's Parish  (Episcopal) in Pittsfield MA Barbara Hanger will be remembered, mourned, and committed to God's eternal care. Life often brings us unexpected gifts which enrich our lives beyond all measure. Mine was to be Barbara's Rector and Pastor from 1984 - 2000, and beloved friend for the next thirteen years. I think of her as being faithful and feisty. She was faithful to the Lord Jesus Christ in whom she had a deep and abiding trust. She was faithful to the Episcopal church in Pittsfield where she was deeply loved, trusted and respected as a leader. She was faithful to her heritage and community as a tireless worker for civil rights and justice. Above all she was faithful to her children: They were three by birth and five by adoption. And then there were the approximately 100 children to who she gave love and care for shorter or longer periods over (probably) 40 years, and scores of Pittsfield ch…
Post a comment
Location: Pittsfield, MA, USA
Read more

He rings the bell; the owner appears and tells him the dog can be viewed in the back garden.

"Do you really talk?" he asks the dog.

After recovering from the shock of hearing the dog talk, the man asks, "So, tell me your story."

The Labrador looks up and says, "Well, I discovered that I could talk when I was pretty young. I wanted to help the government, so I was sold to the SAS.  In no time at all they had me jetting from country to country, sitting in rooms with spies and world leaders; because no one imagined that a dog would be eavesdropping. I was one of their most valuable spies for eight years".

"But the jetting around really tired me out, and I knew I wasn't getting any younger so I decided to settle down. I signed up for a job at Heathrow Airport to do some undercover s…
Post a comment
Read more

My buddy the Bishop.

November 12, 2013
Lo all those many years ago (probably in 1986/87) when I was the Rector at St. Stephen's Parish, Pittsfield, MA  I invited parishioner Alex G to have lunch with me.

Alex G was a confirmed bachelor.  He was moderately wealthy.  He was notoriously frugal.

We met at the (now closed) "Stanley Club" on Bartlett Ave in Pittsfield.  The Stanley Club had been a semi-private eating place for the bosses and their wives at "The G.E." - at one time the major employer in Pittsfield, (more than 10,000 at the time of the Korean conflict).

By my day it was a "middling to good" eating place for all white collar folks - bankers, lawyers, clerics etc. It was a good place for private conversation  -  and it had an additional  small dining room where the Pittsfield clerics often met for "dining and whining".

A fabulous man, one Jim Trefy (Jim Tefry?) managed the place.  He was so well liked in Pittsfield - we called him Mr. "Fine and Dandy" 'cause …
Post a comment
Location: Crab Trap Ellenton FL:
Read more

Those “for whom bugles sang, saddening the evening air” 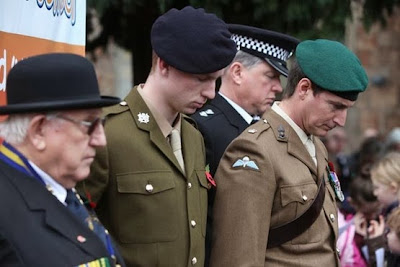 Those “for whom bugles sang, saddening the evening air” (Wilfred Owen) (Great War Poet)
Thanks to Amy McCreath for the reminder of Wilfred Owen's lines.

The eleventh hour of the eleventh day of the eleventh month (November 1918) used to be known as Armistice Day.  It signaled the truce between the armies of Great Britain, France and the United States with the German High Command in what was known as "The Great War" or The War to end all wars",  until the 1939-1946 World War, caused it to be re-named as World War 1.

Armistice Day (Nov 11th)  was renamed as Remembrance Day in Great Britain and the Commonwealth, and as Veteran's Day in the U.S.A.,  to reflect that The War to End all Wars  solved nothing, and that there have been all too many subsequent wars.

For some reason my home City newspaper - the "Bristol (U.K.) Post" published photo's of the Remembrance Day ceremonies (observed on Sunday Nov 10th) under the older title of Armistice Day.

Over the top with MARS COMPANY advertising slogans

November 10, 2013
I occasionally treat my cats Ada and Adelaide with  Temptations brand treats  (Made by  the MARS Company)

Ada and Adelaide gobble them down.

They would do the same with some  (hypothetical  labelled)PIGS TAIL FLAVOURTREATS.

In other words my cats enjoy their treats, with no regard to the "over the top"  labeling  such as FREE RANGE CHICKEN FLAVOR.


Ain't  our CATS so smart Indeed they are. The cats tell me that  the MARS  Company ought to blush and be ashamed  that they market a  simple feline treat  under the advertising slogan  FREE RANGE CHICKEN FLAVOR.  2.I humbly agree with my cats. 3, And with my cats  I ask the MARS COMPANY  just exactly what are"Free Range Chicken  flavoured  cat treats?"﻿
MIAOW