I think I might be able to explain some of Sarah Palin's appeal. She's the
"American Idol" candidate. Consider. What defines an "American Idol"
finalist? They're good-looking, work well on television, have a sunny
personality, are fierce competitors, and so talented, why, they're darned
near the real thing. There's a reason "American Idol" gets such high
ratings. People identify with the contestants. They think, Hey, that could
be me up there on that show!


My problem is, I don't want to be up there. I don't want a vice president
who is darned near good enough. I want a vice president who is better,
wiser, well-traveled, has met world leaders, who three months ago had an
opinion on Iraq. Someone who doesn't repeat bald- faced lies about earmarks
and the Bridge to Nowhere. Someone who doesn't appoint Alaskan politicians
to "study" global warming, because, hello! It has been studied. The returns
are convincing enough that John McCain and Barack Obama are darned near in
agreement.


I would also want someone who didn't make a teeny little sneer when
referring to "people who go to the Ivy League." When I was a teen I dreamed
of going to Harvard, but my dad, an electrician, told me, "Boy, we don't
have the money. Thank your lucky stars you were born in Urbana and can go
to the University of Illinois right here in town." So I did, very happily.
Although Palin gets laughs when she mentions the "elite" Ivy League, she
sure did attend the heck out of college.


Five different schools in six years. What was that about?


And how can a politician her age have never have gone to Europe? My dad had
died, my mom was working as a book-keeper and I had a job at the local
newspaper when, at 19, I scraped together $240 for a charter flight to
Europe. I had Arthur Frommer's $5 a Day under my arm, started in London,
even rented a Vespa and drove in the traffic of Rome. A few years later, I
was able to send my mom, along with the $15 a Day book.


You don't need to be a pointy-headed elitist to travel abroad. You need
curiosity and a hunger to see the world. What kind of a person (who has the
money) arrives at the age of 44 an has only been out of the country once,
on an official tour to Iraq? Sarah Palin's travel record is that of a
provincial, not someone who is equipped to deal with global issues.


But some people like that. She's never traveled to Europe, Asia, Africa,
South America or Down Under? That makes her like them. She didn't go to
Harvard? Good for her! There a lot of hockey moms who haven't seen London,
but most of them would probably love to, if they had the dough. And they'd
be proud if one of their kids won a scholarship to Harvard.


I trust the American people will see through Palin, and save the Republic
in November. The most damning indictment against her is that she considered
herself a good choice to be a heartbeat away. That shows bad judgment.
Posted by J. Michael Povey at Friday, September 12, 2008 No comments: Links to this post 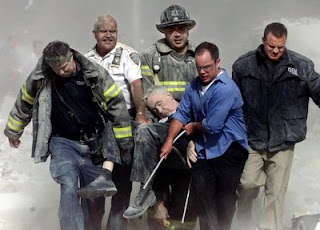 Borrowed from my friend the Revd. Elizabeth

See her wonderful blog at

Lord, take me where You want me to go,

let me meet who You want me to meet,

tell me what You want me to say,

and keep me out of Your way.

And now for something completely different 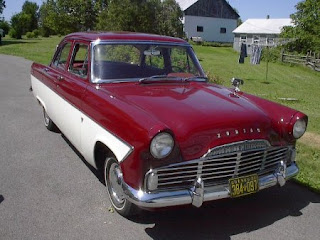 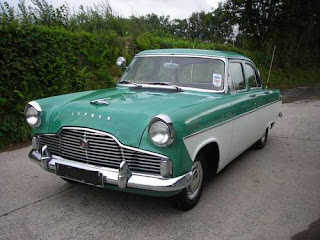 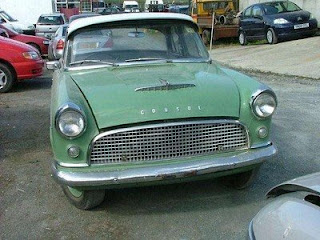 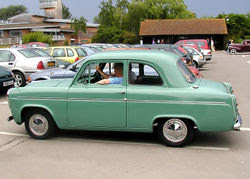 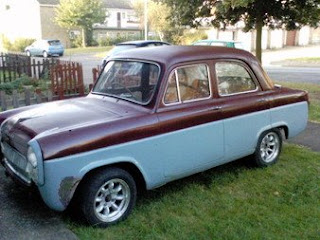 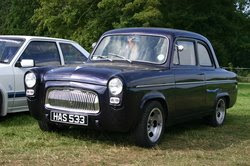 Top to bottom
Zodiac, Zephyr, Consul, Anglia, Prefect, Popular
I’ll leave the “McSame/Pistol Packin’ Momma” ticket alone for now, lest anyone should suspect that I detest their politics!

There were very few car owners in the working class area of Bristol where I grew up.
My parents never owned a car, and I was the first of my siblings to own a car (which I bought when I was 23 years old).

For reasons I do not understand or explain, as a non car owning boy and early teenager, I thought that Ford (of Britain) cars were the very finest.

In 1960 (when I was sixteen years old) Ford produced cars under six model names.

They were the “Popular”, “Prefect” and “Anglia” (names which Ford had used since before World War II), and then the “Consul”, “Zephyr” and “Zodiac”. My dream car was the Ford “Consul”.

The very first car I owned was a Ford “Estate Car” (which is what we British called what the Americans know as a “Station Wagon”). I am not certain, but I seem to remember that it was a Ford “Escort” (based on the Anglia).

Ford of Britain was very reluctant to innovate (shades of Henry Ford!), and all Fords of that time (1960) had three speed gear boxes, and pneumatically operated windscreen wipers. Ford relied on the trusted and true, banking on the loyalty of its customer base.
The Company was slow to accept that the times were changing; that car ownership in Britain would become widespread; and that customers would expect and demand cars that were more exciting, and well engineered.

These days Ford of Europe is one of the leaders in small to medium sized cars in the United Kingdom. Their line is technically sophisticated and mostly fuel efficient. The same is true of “Vauxhall”, a subsidiary of General Motors
Some of us wonder why Ford and GM cannot manufacture and sell their European lines in these United States.
I’ll most likely never buy another Ford, but those were my dream cars of 1960

The McCain/Palin ticket is leading in the opinion polls. Groans from me.

John McCain is a man of the 20th Century. He seems not to understand the 21st Century situation, in which the United States is no longer the dominant power.

Sarah Palin is a sharp and shrewd candidate. Despite her retrograde and antediluvian views she appeals to the 50 million or more American Christian fundamentalists.

Her selection as Republican candidate for VEEP has energized the “Christian Right”.

The great and wise Roman Catholic Nun, Sister Joan Chittester lays out the issues in her recent posting.

Sarah Palin has a murky record. She is not all “sweetness and light”. See for instance (from the Democratic Party)

But demonising Sarah will simply not cut it. It might make Liberals such as I feel “good and righteous”, but such demonising will also energise the Radical Right.

Senator Obama has his work cut out. He must lay out a vision of a new kind of America in the 21st Century, without alienating the un-decided middle voters.

I desperately want him to be elected. He is a man who understands the future, unlike Senator McCain, who lives in the past.

Perhaps the election will be decided on nostalgia or hope.

In those realms, nostalgia usually wins.

That’s “tough titties” for Christian radicals such as I, whose entire worldview is built on hope.
Posted by J. Michael Povey at Tuesday, September 09, 2008 No comments: Links to this post

The United States is in hock to China and to the oil producing nations.

They are calling the shots.

We (the U.S.A.) are now a financial colony of China and OPEC.

We are in a mess because of our reckless and ideologically based foreign policies (see Georgia, Iraq, and Iran etc for details).

These policies have been based on neo-conservative theory, rather than on State Department and Defence Department wisdom and experience.

We are in an internal mess because the voters and the Congress bought into Ronald Reagan’s untried and un-tested ideas that taxes were intrinsically bad; and that government regulation was abhorrent.

Reaganology has led to record American budget deficits, and to the disastrous failures in the Banking, Mortgage, Housing, and Airline industries.
Despite this, America may yet elect the heirs of failure (McSame and the Pistol Packin’ Momma) to be stewards of our heritage for the next four years.

But this blog entry is not simply about political and economic theory.

It is about what is truly happening as a result of Reagan, Bush Sr. and Bush Jr. policies.
Here is some dope.

1. Resurrection House helped provide housing in Motels for 30 families last month. This is a record number for us. And we know that we are but one of the eight or nine agencies in SRQ who provide this kind of help.

2. I have a delightful, prudent, and wise neighbour who is a Realtor. The market is so bad that he has not made a sale in months. His financial situation is so desperate that I (gladly) agreed to let him use one of my credit cards to renew an essential professional membership at a cost of $23. Who can imagine not having a meager $23?

Musings of a bored Priest

I took myself down to St. David’s in Englewood this morning. This is the parish, some 45 minutes drive south of Sarasota where I help out from time to time.

The Rector is a good man, and the congregation is wonderfully friendly. But the Liturgy drives me crazy.

It is all so low key; so lacking in energy. It drags on and on. At one point this morning I thought “If this gets any slower it will go backwards”.

I was seated up front behind the Altar, all decked out in my vestments, so I had to look engaged and interested.

But my mind was not in the same place as my body!

I was thinking about the first Lesson and the Psalm for the day. Here are a couple of extracts:


Psalm 149 v6Let the high praises of God be in their throats and two-edged swords in their hands, 7to execute vengeance on the nations and punishment on the peoples,

I began to muse. And I mused about the approved violence in the Bible.

In Exodus the Lord says that he will kill all of the first born in Egypt, as a means to let the Hebrew people escape from slavery. The text suggests that the Lord approves of infanticide.

In the Psalm the people sing the praises of G-d with their voices, whilst they slaughter their enemies with a double edged sword.

St. David’s good Rector ignored these passages in his sermon, preferring to preach from the Gospel reading alone. Fair enough. I too might have done the same thing.

But the two violent passages were left “hanging out there”.

Had I been preaching I would have felt compared to de-construct them, to “let G-d off the hook”, so to speak.

(I would have suggested that the passages project the honest and violent thoughts of the people, rather than the will of G-d).

But maybe G-d should not be let off the hook so easily. After all, even the Book of Revelation in the Christian Scriptures speak of a fearsome G-d of vengeance.

All this is to say that “G-d sanctioned violence” is a part of the Jewish and Christian “Sacred Texts”.

I believe that we should treat these texts with caution and suspicion.

I also believe that we should be honest enough not to castigate Muslims for the approved violence in their “Sacred Text” (The Koran), whilst ignoring the violence in our own scriptures.
Posted by J. Michael Povey at Sunday, September 07, 2008 1 comment: Links to this post