The Fallen Faithful or "I was at the world premiere of a movie!"

April 10, 2010
After our late lunch at the Columbia Restaurant Ybor City last Thursday (April 8th 2010), Ben Morse, Bob Lewis, Ed Green and I hoved over to Tampa’s “Channelside Cinema” for a movie premiere.

Yes, it was the world premiere for “The Fallen Faithful” – filmed in Tampa.

We were at this premiere because Andrew “Drew” Wirtz (second son of the late Bruce Wirtz and Mary Virginia Wirtz) was one of the co-producers and financiers of this low budget movie.

(After Bruce and Mary Virginia divorced, Bruce [a friend of mine since 1976] was partnered with Ben Morse.)

This one million dollar “indy” movie uses such fine actors as Sonny Marinelli, Mark Margolis, and Obba Babtunde. (“Google” their names if you will!)

The plot is more than plausible.

The acting is super.

(And it was lovely to see Drew Wirtz in a cameo role – the be-spectacled worshipper in a church scene at the sharing of the peace.).

BUT ------ the movie includes so much violence. That the violence is integral to the plot is something…
Post a comment
Read more 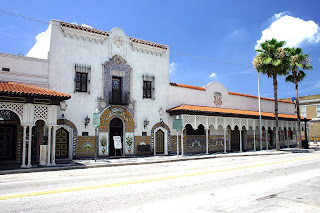 You may remember that in an earlier blog entry I wrote about a book titled “Ybor City Chronicles” by Ferdie Pacheo.

Ybor City was the heart and soul of a vital Cuban/Spanish/Italian community from circa 1900 to circa 1950. In those years Ybor City was famous for its hand rolled cigars.

The book is a tender and affectionate account of Ferdie’s upbringing in Ybor City (a district of Tampa, FL) between the years 1935 – 1945.

In my earlier blog entry I remarked that the book made me wistful for a place and time which I never knew.

At the heart of that place was the Columbia Restaurant, est 1905.

Here is the Columbia Restaurant story.

After reading Pacheo’s book I became determined to travel the 60+ miles from Sarasota to Tampa and to dine at the Columbia. 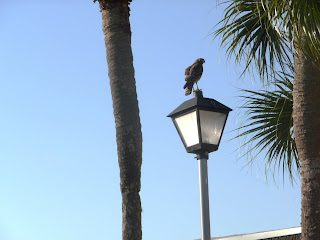 It is not unusual to see hawks in this part of Florida. They are often in pairs, and perch singly, about a half mile apart on the highest point of the highest trees. They call to each other, and their call (more of a shriek really) is by no means a pleasure to the ears.

Call apart, they are so beautiful. The hawk pictured below forsook the high places and spent quite a bit of time on the lamp post just outside my home. My guess is that she/he is a juvenile.


Boil a cut up sweet potato or two to prepare it/them to be mashed.

About half the time before they will be mash-able, bake a banana or two (skins on) in a pre-heated 400 degree oven.  Bake them until their skins are blackened.

Mash the drained sweet potato/s and the skinned banana/s, adding a bit of cinnamon and some honey.


Eat and enjoy (with other veggies, fish, or meat as the case may be).

(2)  Let’s make a law that gay people can have birthdays, but straight people get more cake - you know, to send the right message to kids.

(3)  Aunt Lorraine said, “Bob, you’re gay. Are you seeing a psychiatrist?” I said, “No, I’m seeing a lieutenant in the Navy”.
Post a comment
Read more

Humour from"back in the day"

April 05, 2010
"Back in the day" teachers and school headmasters were more caustic and more honest when writing school reports than they are today.


The following are some examples of their craft as printed in today's (April 5th 2010)  London Daily Telegraph.

15 of the best
1.“Rugby: Hobbs has useful speed when he runs in the right direction.”

2.“The tropical forests are safe when John enters the woodwork room, for his projects are small and progress is slow.”

3.“The stick and carrot must be very much in evidence before this particular donkey decides to exert itself.”

4.“French is a foreign language to Fowler.”

5.“For this pupil all ages are dark.”

6.“Henry Ford once said history is bunk. Yours most certainly is.”

7.“About as energetic as an absentee miner.”

8. “He has given me a new definition of stoicism: he grins and I bear it.”

9.“The improvement in his handwriting has revealed his inability to spell.”

10. “He has an overdeveloped unawareness.”

April 04, 2010
We’ve just come to the end of what pretentious clerics and pious lay Christians call the Triduum. That’s a fancy word for the time between the evening of Maundy Thursday and the morning of Easter Day.

(By the way - there is no such thing as “Easter Sunday”. Easter is by definition a feast of the first day of the week - so the day should be called either “Easter”, or “Easter Day”)

Having thus revealed my Anglican and linguistic snobbery, I return to the Triduum!

Ted Copland, the Rector at St. Boniface Church on Siesta Key was good enough to ask me to preach at the Maundy Thursday Eucharist. See my earlier post today if you wish to read my sermon.

After the sermon I washed the feet of the Revd. Andrea Taylor, and she washed mine. As my sermon says, I truly believe that the foot-washing of Maundy Thursday is the quintessential expression of what it means to be a priest.

Good Friday saw me back at St. Boniface’s for the 10:30 a.m. Liturgy. I was assigned the role of “narrator” in the…
Post a comment
Read more

John 13:1-20 13Now before the festival of the Passover, Jesus knew that his hour had come to depart from this world and go to the Father. Having loved his own who were in the world, he loved them to the end. 2The devil had already put it into the heart of Judas son of Simon Iscariot to betray him. And during supper 3Jesus, knowing that the Father had given all things into his hands, and that he had come from God and was going to God, 4got up from the table,* took off his outer robe, and tied a towel around himself. 5Then he poured water into a basin and began to wash the disciples’ feet and to wipe them with the towel that was tied around him. 6He came to Simon Peter, who said to him, ‘Lord, are you going to wash my feet?’ 7Jesus answered, ‘You do not know now what I am doing, but later you will understand.’ 8Peter said to him, ‘You will never wash my feet.’ Jesus answered, ‘…
Post a comment
Read more
More posts