Am I boring you?

January 31, 2009
I have not made many recent entries on religion or politics. Nor have I received more than two comments in the past two weeks.

Am I boring you?

POLITICS? You do not need me to tell you that the current fiscal crisis is global. What else did we expect in a global economy?

Gordon Brown (British Premier), American President Obama, the government of Iceland, the International Monetary Fund -- &c, &c, &c seem to think that we can spend ourselves out of the crisis.

Maybe he was right.

But spending to bail out Banks and Finance Houses will, at best, do little more than to e…
2 comments
Read more

Much ado about much a doo-doo 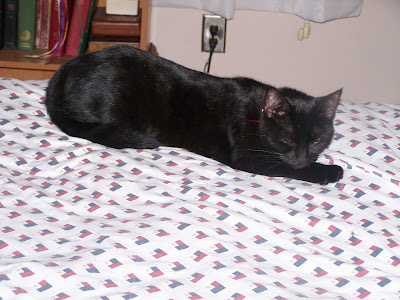 Cats are wonderful in their own way.

Ada, for instance, loves to nuzzle me, and give me playful little bites when she wants my attention. That’s usually when I am trying to sleep.

And if I stretch out for a nap on the sofa, Adelaide will invariably jump up onto my tummy, and go nose to nose with me until I pay attention.

Today I was not thinking wonderful thoughts about Adelaide. For the second time in a week she has pooped on the inside door mat in the Lanai. But today, shoe and sockless I stepped right into her deposit.

I did not chastise her (she does not speak English) but my language was raw as I cleaned up the mess on the mat and on my foot.


I am at least grateful that she is not an elephant!

One was for my 2008 tax return. I use a very fine firm of accountants in Peabody, MA, and have done so since 2001. I was waiting on just one tax document, and it arrived today. So off went that packet. I do not expect to be billed for additional taxes, and with any luck I’ll get a refund.

The other was the application for a U.K. Social Security Pension, arising from my 12 year work history there. Last Monday I remembered that my “missing” birth certificate was probably stored in my locked box at my local bank, and so it was. Having found that, my mission was complete, and I mailed various forms to the U.K. Pension service.

You’ll be pleased to know that I was born, and that my birth was registered in the St. George branch office of the Registry of Births, Marriages and Deaths.

There was never a mention of gooseberry bushes or alien space craft. (This reminds me of a Chicopee parishioner who told me that wh…
Post a comment
Read more

J.G. got it wrong

After a few days in the classroom with our teacher, Miss Suttle, (yes I remember her name 60 years later) J.G raised her hand.

Miss Suttle corrected her. She told J.G that the correct question was "Please may I use the offices?"

Yes, that was the euphemism for using the toilet/bathroom back in 1949.


Later we were taught to ask our teachers "Please may I be excused?" 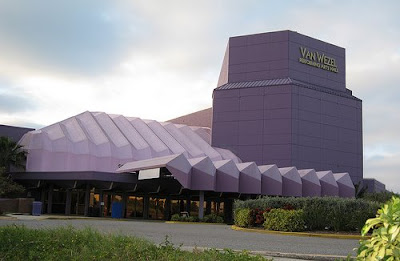 ,,, which is highly convenient as I am in one of my periodic "stop the world I want to get off" moods.

So, afar I go to bed here is a simple entry.

These are pics of the (Frank Lloyd Wright School) "Van Wezel Centre for the Performing Arts" here in SRQ - venue for my three concerts this week.

January 26, 2009
Last week on Monday I was at an AIDS benefit, which featured a quite dismal Drag show.

On the following Wednesday I was with nine friends at the “Irish Rover” pub for bangers and mash, good drink, and enjoyable sing-a-long music.

Sunday saw a farewell to Robert Reeves one of the two musicians at St. Boniface Church. He is retiring.

He pulled out all the stops and the choir sang one of my favourites, the chorus “The Heavens are telling the Glory of God” from Haydn’s “The Creation”.

I sang this when I was about fourteen years old and in the choir at Fairfield Grammar (High) School in Bristol, U.K. We enjoyed a first class musical education at Fairfield, thanks to Mr. W.J. “Dickie” Richards, the Music Master. So I went down memory lane when I heard the chorus again, and believe it or not, I could remember just about all of the bass line. It was hard for me not to sing a long, so I mouthed the words.

January 25, 2009
I have been completing the paperwork which will enable me to get a small pension from the Pension service in the United Kingdom. This will reflect the 12 or so years in which I worked in the U.K. before migrating to the U.S.A.

I have kept some records including my British “National Insurance Number”. To my dismay I could not find the copy of my birth certificate, which I was certain was in a paper file folder here. Ne’er mind. I went “on-line” and a duplicate will be sent me.

It also showed that I was born at number 42 Alpine Road, Easton, Bristol.
I knew that my twin and I had been born in a house on Alpine Road, but I had never before known at the house number.

The card also reveals that my family and I moved to 47 Devon Road on 28th December 1945.