The Bishop of New Hampshire, the Rt. Revd. Gene Robinson is in Sarasota for the weekend, as a guest of St. Boniface Church.


His visit will mean a great deal to us.  Gene is not the first gay bishop in the Anglican Communion  (far from it!) but he is the first bishop to have been wonderful honest about the gift of his sexuality.  And St. Boniface is a church  where gay and lesbians christians participate fully in the life of the parish.

Gene and I have known each other for almost thirty years.  We worked togther on various collaborative efforts for the seven Episcopal Church Diocese on New England.

I'll see him tonight at an intimate and exclusive reception alongside 60 other St. Boniface folks.  And I'll be ministering in some small way when the Bishop preaches and presides at the 9:00 a.m. Eucharist tomorrow morning. 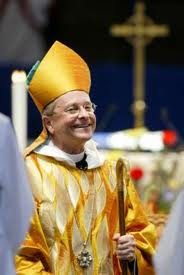 Posted by J. Michael Povey at Saturday, January 29, 2011 No comments: Links to this post

Abortion must ever be viewed as a medical issue, to be discussed and determined by women with their physicians.

It is never a theological/political issue,  to be decided by (mostly male) priests, pastors and politicians.


Have I made myself clear?


I'll put it another way.

Decisions about abortion should be made in Doctor's offices, and NOT from pulpits, or in parliaments.

Posted by J. Michael Povey at Friday, January 28, 2011 No comments: Links to this post

Starting from the time when he was five and three quarter years old my youngest brother Martyn would get up at 5:45 a.m. each day to cook breakfast for his eight siblings and our parents.   Thanks to Martyn we would feast on eggs, bacon, lamb cutlets, baked beans, grilled tomatoes and mushrooms, and toast every single morning.

I would have been “up and at it” at 4:00 a.m. to bake the eleven loaves of bread we ate each day.  As the dough was rising I would churn the butter, and grind the coffee.

Dear brother Stephen would forgo his school lunch break. Instead he would ride his bike to deliver freshly made sandwiches to his brothers and sisters at their schools, and to our Dad at work.

Thanks to Mum we feasted each evening.   Roast beef on Sunday, Lamb on Monday, Pork on Tuesday, Ham on Wednesday, Goose on Thursday, Lobster on Friday,and  Spam on Saturday.  Dessert would always be an overflowing plate filled with fresh fruit and scrumptious cheeses.

No matter what time we called out during the night, our Dad would bring us a dish filled with fresh peaches and ice-cream.  I weep at the memory.

The sacrifices Martyn, Stephen, Dad, Mum and I made were so worthwhile.  They enabled our four sisters to train as welders, and our other two brothers to enjoy their ballet lessons.

It made me very sad.
I was down at Resurrection House, the day shelter for homeless people here in Sarasota.  It’s Wednesday, so I was there to facilitate the weekly prayer service.

Ian is a thirty-something man.  He is well dressed, and looks quite unlike our stereotypical image of the “homeless”.

N.B.  There are no “homeless”.  There are “homeless people”.
“Ian” began to speak.  Together with the other three men in the Chapel, I heard a non-stop and unfocused “speech”.   Little of what he said made sense. But there were phrases  here and there which spoke of his longing to be accepted “just as he was”.

“Just as he was”  is not “just as we are“.  For it became clear that Ian is mentally ill.

He lives in his own world:- a world which makes sense to him, but which seems to be nonsense to others.

I used my soft and gentle voice to try to “talk him down”.  But my words made no more sense for him than his words did for me.

In the end I asked him to leave our Chapel, for I needed to create a safe space for the other men who were anxious to pray.

Of course this made me feel crappy.   As a Christian Pastor I believe that all people are welcomed and accepted in the Lord Jesus Christ.

But I had to balance the need to enable a prayerful space for the other three homeless men against the insatiable needs of “Ian”.

“Ian” left the Chapel without protest.   The other men, (far more “street wise” than I could ever be), understood the entire scenario, and were glad that I had helped to create a  place of quiet peace for their prayers.   Good for them.

Nonetheless I have been sad all day.

I am sad for those who, like Ian, live with mental illnesses.

Posted by J. Michael Povey at Wednesday, January 26, 2011 No comments: Links to this post

That’s good, cos we need every drop in rain-starved Florida.  It’s unusual because we are not in the rainy season (June through November).  The rain was preceded by strongish winds which reached 28 mph.

At just about 5:00 p.m. even though he lives less than half a mile away, I drove over to visit with my friend Ben, preferring not to be soaked in the heavy rain.

At about 5:30 p.m. our mutual friend Bob arrived.  He announced that our County was under a tornado watch.  That was a bit of “news” that I’d missed, since I do not watch T.V., and rarely listen to the “wireless”  at home.

But it did not matter. After all, what could I have done even if I had heard about the tornado watch?


The correct answer is “not a damn thing!”.
Our nations spend countless dollars, euros, and pounds in the quest for the illusion and obsession of what is called “national security”.

And yet, even with the semi-fascistic apparatuses of “security”,  which we have come to accept as a norm, we are ever vulnerable to powerful and uncontrollable forces.

The mortifying floods in Australia, Brasil and Sri Lanka; and the dangerous and bitterly cold weather in New England remind us of two things:


1. We are not in control.
2. “Security”  cannot be guaranteed.
Thus if we are wise we shall learn to live “one day at a time”.

Or as the Bible puts it in Proverbs 27 verse 1.  "Do not boast about tomorrow, for you do not know what a day may bring".

That is a somber bit of wisdom.

Posted by J. Michael Povey at Tuesday, January 25, 2011 No comments: Links to this post

Oh how I wish!   I would love to be able to have better and longer sleep.


But my sleep is most always fitful.  I move in and out of good overnight sleep, ever being awakened by dreams  (funny, fanciful, and fearsome).

How I wish that I did not dream!


How I wish that I could get at least eight hours of undisturbed sleep.

But I did not get those eight hours of un-interrupted sleep.  For my senior cat Ada decided that 4:30 a.m. today was the perfect time at which to scratch on my bedroom door.  She scratched with great verve and energy.

She scratched and scratched  so  much that I gave up the idea of sleep and I arose to pet her; to make coffee; and to begin my day.


O.K. you "writer of Psalm 127".  You may say that God will give his beloved sleep, but my cat Ada decided otherwise.  So there!


Posted by J. Michael Povey at Monday, January 24, 2011 No comments: Links to this post

From the Holy Spirit to Mussels

What a day!
I preached this morning at the 8:00 and 10:00 Eucharists at All Angels Church on Longboat Key.

I had gotten writer’s block earlier in the week, so simply could not preach from a full script as is my wont.  So I preached from notes.  Just before the early service I was in a bit of a panic since I felt sure that my  notes were inadequate.  So I put out a heartfelt plea to God the Holy Spirit, asking for the grace of inspiration.

Even as I preached I felt a surge of energy.  I do believe that I experienced the presence and power of that Holy Spirit, for which I can only say “thanks be to G-d”.

It was gratifying to hear many worshippers says that the sermon “spoke to their condition” (as the Puritans would have said), so again I was able to be grateful for the presence and power of the Spirit.

After lunch my neighbour Ed and I went to the Florida Studio Theatre to see  a play: “The 39 Steps”.  It is a bit of slapstick/farce/comedy, inspired by the Alfred Hitchcock film of the same name, which in turn was adapted from John Buchan’s famous novel.

This afternoon’s play was too wonderfully silly for words. I, and many others in the audience, were laughing out loud for most of the performance.

It lived up to the FST  advance publicity which reads:  “Vintage Hitchcock meets Monty Python in this classic spy thriller!”

The play being over, Ed and I drove down to “my other parish”  (St. Boniface Church, Siesta Key) where we joined our mutual friends Bob and Ben for a free concert of music by J.S. Bach.  We enjoyed some exquisite moments from an alto  soloist (Rachel Nelson Assi); from the St. Boniface “Schola” Choir; and from guest violinists Lena Cambis and Sean O’Neil who delighted the entire audience with their performance of Bach’s “Concerto in D minor for 2 violins”.

As if my day had not been rich enough, Ed, Ben, Bob, and I then decamped for dinner at  “Miguel’s” -  a pretty fancy restaurant just down the road from St. B’s on Siesta Key.  Those of you who know my gastronomic proclivities will not be surprised to learn that I enjoyed a steaming bowl of Prince Edward Island Mussels. They were delicious.

But I could not leave this good restaurant without seeking out the Manager to alert him about a bit of  dreadful grammar in his menu, where my dish was listed as “Prince Edward Island Mussel’s”.  Aargh!

And now to bed.  To bed with gratitude for a day during which my body, soul and spirit were enriched.