The War to end all Wars

He may also have been one of the last 3 or 4 survivors of World War I.

In his later years, he was a tireless advocate for Peace. I think that he understood the following WWI "statistics".


The total number of casualties in World War I, both military and civilian, were about 37 million: 16 million deaths and 21 million wounded. The total number of deaths includes 9.7 million military personnel and about 6.8 million civilians. The Entente Powers (also known as the Allies) lost 5.7 million soldiers and the Central Powers about 4 million.
Post a comment
Read more 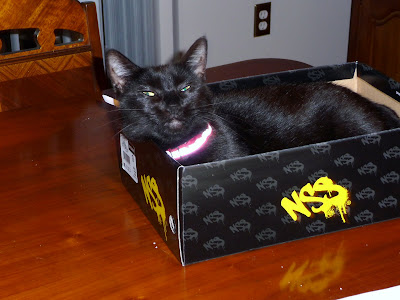 I'll be preaching on Sunday (July 19th) for the first time since June 7th.

The older I get, the harder it is to write sermons.

I've spent three days on my upcoming sermon, and it is still weak.

But my pets provide some relief. I get a kick out of their activity.

Both cats, Ada and Adelaide love to hang out in small boxes. Below is Adelaide in an old shoe box.

And you'll see Penne. She'll hang on to her dog biscuits for hours before eating them. I've entitled her picture "Penne with a stogy".


Printed below is the text of the Resolution passed by our General Convention.(The numbering of the resolutions is mine, for convenience in reading)

(1) Resolved, the House of Bishops concurring,

That the 76th General Convention reaffirm the continued participation of The Episcopal Church as a constituent member of the Anglican Communion; give thanks for the work of the bishops at the Lambeth Conference of 2008; reaffirm the abiding commitment of The Episcopal Church to the fellowship of churches that constitute the Anglican Communion and seek to live into the highest degree of communion possible; and be it further

(2) Resolved, That the 76th General Convention encourage dioceses, congregations, and members of The Episcopal Church to participate to the fullest extent possible in the many instruments, networks and relationships of the Anglican Communion;

July 15, 2009
Penne’s behaviour has been odd today. She’d been both full of energy, and very cloying.

She has “demanded” many walks, and we must have put in at least six miles.

Back at home, she’s wanted to be so close to me at all times.
I projected “she’s trying to tell me something”, but whatever it was, it was unfathomable.

On arriving back at home she greeted me with wild enthusiasm. I took her for one last walk, and she has now settled quietly alongside my bed.

I suspect that there are congruencies between the way Penne “relates” to me, and the way I relate to God.

For at least twenty years on July 14th I have taken out a C.D. and played Hector Berlioz’ arrangement of the French National Anthem: "La Marseillaise".

It is a stirring anthem, with an incredible tune. In my opinion it is one of the greatest National Anthem tunes in the world.

It makes the tune of “God save our gracious Queen” sound very pedantic.

It makes the tune of the American National Anthem ( a tune “stolen” from a British drinking song) seem quite boring.

Forgive me if I assert that the British “God save…” is the most sing-able.


(Like it or not, Beethoven so liked “God save our…etc” that he wrote a whole set of variations on the melody).

But it is the French tune which stirs me most! And the arrangement by Berlioz is superb.

On this 14th July 2009 I ask you to lift your glass and say with me: “Vive la France”.
Our world would be greatly impoverished without France and the French people.

‘Tis true that I rarely watch T.V., but having been given a T.V. set I thought that an outlet on the Lanai would be at least useful for my guests.

He could see my name on his computer screen, and after I had made my request he asked:

“Are you the Michael Povey who used to preach in Pittsfield?

I confessed that was the case.

Then both he and I got goose-bumps. It transpired that he was Lance Larosa, who (then a High School kid) attended St. Stephen’s in Pittsfield with his pal Michael Wheelock, back in the late 90’s when I was Rector there.

This is a small and strange world.

It’s strange because of all the SRQ Comcast workers, my call was received by Lance.

It’s strange because he was encouraged to ask the question when he thought that he not only knew my name, but that he also recognized my voice.

It’s strange because we hav…
3 comments
Read more

I have a high regard for our President, Barack Obama. I would vote for him again in a heartbeat.
But there are days on which I wish that he were not so much of a Saul Alinsky type community organizer.

I wish that he could get down and dirty with the Congress. I’d rather that he drew inspiration from Lyndon Baines Johnson than from Saul Alinsky.

I have a very high regard for the Presiding Bishop of the Episcopal Church, the Most Revd. Katherine Jeffords Schori.

I know that she is bright.

I wish that she were more passionate.

(Today I watched her Press Briefing at the Episcopal Church General Convention, and even though I agreed with her views, I missed some passion).

[To be fair, perhaps our world cannot deal with passionate female leaders.]

I am happy that my beloved Episcopal Church is ever more welcoming of gay and lesbian Christians.

But I wish that my Church would not only speak of “welcome”, but also of repentance and faith.