My Mum's family of origin.

There were two who I never met.

Her sister Kate died of “lock-jaw” (tetanus poisoning?), long before I was born.

Her youngest brother, Albert was killed in Normandy in August 1944, three months after my birth.


I met her oldest brother John but once, when Mum arranged a family reunion in about 1960.

He had long before hoved off to Southend-on-Sea. There he was the town Mortician. He had a daughter, my cousin Margaret. I have never met her.


Her brother Harold lived in our neighbourhood. He was a cobbler, back in the days when cobblers were common. I met him often, together with his wife “Doll”. I remember him as a simple (in the best sense of that word) man.


I met their son, my cousin John many years ago – but only once.

Their daughter, my cousin Sheila, became a treasured friend to us, her Povey relatives, until her sad and untimely death from cancer when she was in her 50’s


Reginald was another of my mother’s brothers. He was a bit of a braggart. I never cared…
Post a comment
Read more 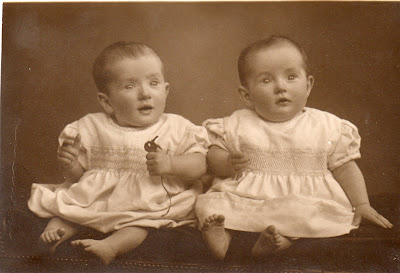 A few people have been happy to see some of my old photo’s on this blog.

I have been able to attach them since my new Epson printer has a scanner.

Maybe I have wanted to attach them since I plan to be in England this May to be with my sibs, (there are nine of us) and to celebrate my 65th birthday.

Here are some pictures of my twin (Elizabeth) and me.

You will see us as babies - I am the one holding a key.

There is another picture taken when we were approx 3 or 4. I am already gazing upwards!

The third picture is when we were (maybe) 9 or 10. Already my twin is taller than I.
It was not until puberty (late in my case), that I leap-frogged her by an inch or two. 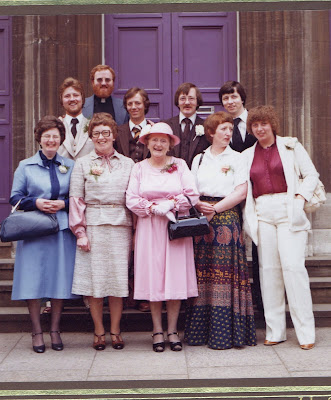 My mother with her nine children (1979). Dad had already passed.


When I had hair. With my then girlfriend Anne in 1974


When I was thin. In the backyard of the Rectory, Pittsfield, MA in about 1992

In London: the Telegraph, and the Guardian.

In Boston: the Globe.

From Pittsfield: the Berkshire Eagle.

In SRQ: the Herald Tribune.


I listen to a bit of news on National Public Radio.

Since I am interested in the near and middle East regions, I try to broaden my news sources by, on occasion, reading http://english.aljazeera.net/ or http://www.dailystar.com.lb/default.asp or http://www.haaretz.com/


In most of my reading I have discovered that Susan Boyle has had her day. She is off the front pages.


But, to put the “Swine Flu” story in perspective I quote my St. Louis colleague Mike Kinman. He writes:

We know that we are in a foolish world when public officials say things such as:

April 28, 2009
JERUSALEM (AP) — The outbreak of swine flu should be renamed "Mexican" influenza in deference to Muslim and Jewish sensitivities over pork, said an Israeli health official Monday.
Deputy Health Minister Yakov Litzman said the reference to pigs is offensive to both religions and "we should call this Mexican flu and not swine flu," he told a news conference at a hospital in central Israel
Post a comment
Read more

On dealing with sh-t.

I made a mistake yesterday.


I gave some fatty beef rib bones to my dog Penny. She enjoyed every lick, every chew, every gnaw.

She enjoyed them, but they did not serve her well. They gave her the “runs”.

I woke this morning to find some dog poo in my hallway. I commended Penny for relieving herself, in extremis, on a tiled floor. Later I discovered that she had also evacuated on the carpeted floor of my Lanai.

To be fair to Penny, I’d heard her whimpering during the night, but I'd ignored her.

So I had a fairly extensive clean-up session this morning. I did this with as much grace as I could muster.

Penny did not receive a single scolding. I took responsibility for my own foolishness.


Often I was called upon to deal with other people’s crap.

They wanted me to solve, resolve, or clean-up the mess they had made in their lives and loves.

Each Tuesday morning a group of local Clerics meet at St. Boniface to learn from each other as we look at the passages for the following Sunday. We are appropriately serious about our intent. We are not afraid to raise honest questions about those passages which we find to be strange, or stupid, or incomprehensible. We are not afraid to express strong opinions about the passages. We try to bring our own lives under the scrutiny of the texts. We read the bible reverently and critically.


Last Tuesday as we read today’s passages and especially about the incongruities in the Gospel; we talked a bit about how it feels when someone comes back into our lives after a period of absence. One of our members is looking forward to this summer when his and his wife’s daughter will have graduated College, and will be home for a while. “I want my daughter back” he said “and part o…
2 comments
Read more
More posts