A brother and a nephew

My brother Martyn, his son Sam and I have just concluded the greatest week of vacation.  Sam and Martyn arrived from the UK on May 27th 2011 and will be flying back home (SRQ-ATL-LHR) in about 20 minutes from now (6:55 p.m. Saturday 4th June 2011).
Sam, aged 15, has blossomed this week.  He’s always been a bit diffident about “new things”, but he overcame this diffidence in splendid fashion.  I noticed it, and his Dad commented on it.
He’s learned to like good steak, cooked medium rare.  He’s been able to socialise well with folks he’d never before met.  We kayaked in Sarasota Bay and he took to the kayak like a pro. Dad and he went out on to the Intra-Coastal last Monday on a jet-ski, and Sam liked it so very much, that he and I repeated the adventure this morning  (more about this later).  Sam, Martyn and I parasailed off Anna Maria Island on Friday 3rd June and the formerly “slightly retiring” 15 year old enjoyed every moment.
Of course, there was “something in this for me too”.   I got into the spirit of adventure, and thoroughly enjoyed the kayaking, the parasailing, and the jet skiing.   I would never have had these adventures apart from the visit of my favourite brother and my favourite nephew.
Three months ago Sam was not even sure if he wanted to fly to the U.S.A.   Now he is talking about his hope for another trip next year!
About the jet-ski trip this morning:  I was “naughty” and allowed Sam to drive (of course you allow 15 year olds to have adventures, even if it flies in the face of  State regulations).  This morning when Sam was “driving” he zigzagged (by intention) so much that I flew off the back of the Jet Ski and was plunged into the Intra-Coastal.  I was wearing a lanyard and when that cut loose the engine stopped.  I bobbed around and then swam back to the Jet Ski to the merry sound of Sam’s hearty laughter at his “dunking of his Uncle”!   Sam and I will never forget this.
How blessed I am to have such a cool brother and nephew.   The photo’ is of the three of us as we were heading out to our parasailing adventure on Friday. 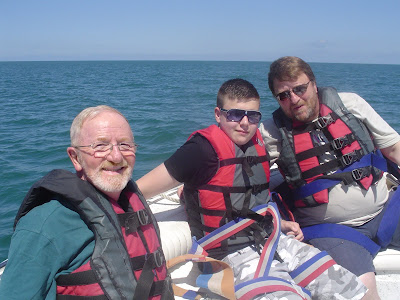 Posted by J. Michael Povey at Saturday, June 04, 2011 No comments: Links to this post

My visitors from Bristol, U.K.

My youngest brother Martyn and his son Sam are here from Bristol, U.K.  We are having a ball!

We had a low key Saturday (their first full day here), but enjoyed a wonderful swim in the balmy Gulf of Mexico off Siesta Beach  (Voted America's #1 beach).

I'd gotten some excellent sirloin steak, so in the evening Martyn grilled it, whilst I made up a mess of roasted vegetables.

I goofed off from Church attendance on Sunday morning, so that the three of us could Kayak off South Lido Beach in Sarasota Bay.  None of us had kayaked before.  Sam (15) "took to it" as if he were a pro!

We got out of the heat in the afternoon by ten-pin bowling, then later went to "Barnacle Bill's" restaurant on North Tamiami trail where each of us enjoyed super entrées  (Martyn and I having shared a bowl of the most delicious mussels as an appetizer.

It was too bad that my battery was "dead" when we returned to the car after dinner. AAA arrived within 50 minutes and jump started the car. We were smart enough to back it into the car port when we got home, because sure enough the battery was again dead on Monday morning.  This time AAA arrived within 10 minutes of my call, and after half and hour we were good to go with a new battery  (and $124 lighter!).

We were "good to go" to the City of Arcadia FL.  In its Oak Ridge Cemetery are buried 23 Royal Air Force Cadets who were killed whilst training at airfields in Arcadia and Clewiston between 1952 and 1945.

Each year the local Rotary Club organises a Memorial Service for these cadets on Memorial Day.  It's a touching ceremony.  This year I was asked to read out  the names as Union Flags and small wooden crosses were placed by the gravestones.  There was a nice flyover of vintage planes by the EAA Warbird Squadron 24 of Punta Gorda FL.  The Union Flag and RAF Ensign were hoisted (the Union Flag being upside down by mistake).

After good burgers and Ron and Charlotte Thompson's home, Sam and Martyn had more fun that you could imagine as they rented a jet ski and cruised up and down what is known as the Grand Canal -  part of Siesta Key.

Sam and Martyn left this morning to visit Sea World in Orlando.  They'll stay overnight in that area and drive to Busch Gardens tomorrow.

My home is unhappily quiet without their presence.  But best of all Sam is having "the time of his life" 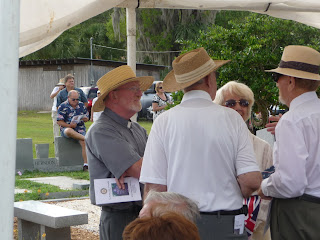 Prior to the Arcadia RAF ceremony 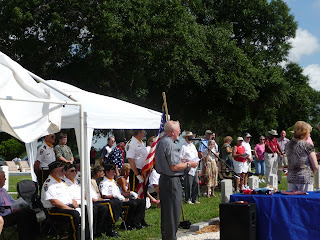 Preparing to read the names 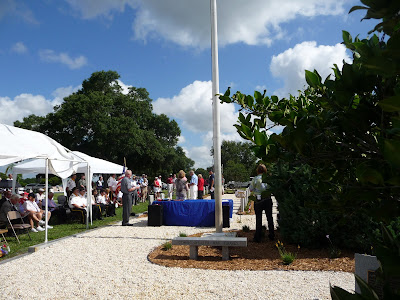 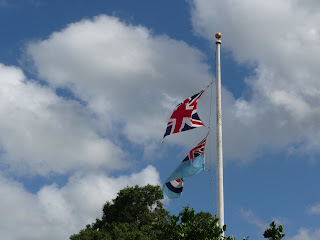 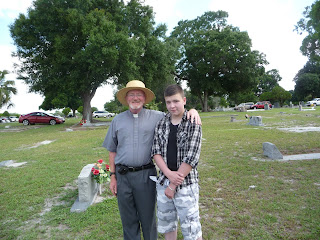 With my best nephew Sam 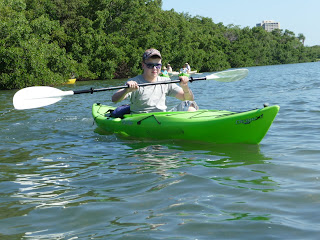 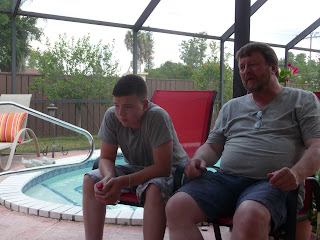 Sam and Martyn  Memorial Day afternoon.
Posted by J. Michael Povey at Tuesday, May 31, 2011 No comments: Links to this post