Gettel Nissan (SRQ) thinks that I am dumb

I received the following letter from Sarasota's "Gettel Nissan" two days ago.  Do these people think that I am stupid. 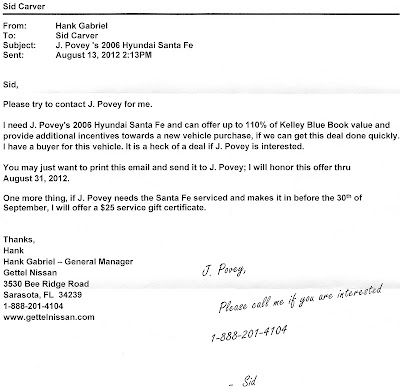 Why the heck would "Hank Gabriel" need my 2006 Hyundai Santa Fe?

He (if he exists) has never seen my vehicle.   He has no idea as to whether the body is in good shape, or if the mechanics have been well maintained.

Of course I will not call the (fictional?) Sid Carver.

In truth - "Hank" and/or "Sid"  are trying to lure me into the showroom at Gettel Nissan in the hope that I will purchase a new vehicle.

I am disinclined to do business with these people.

Their "so-called" letter is bogus.

Gettel Nissan needs a better advertising strategy.Their current one leads me cold.  It is so STUPID!

Posted by J. Michael Povey at Saturday, August 18, 2012 No comments: Links to this post

OLYMPIC GAMES BROADCASTED COMMENTS IN THE U.K.  (VIA "PRIVATE EYE')


That performance has left us speechless. Let’s talk about it.”


“It’s not often you get a once-in-a-lifetime opportunity.”


“I never dreamed I would be the flagbearer. So, yeah, it’s a dream come true.”

Posted by J. Michael Povey at Thursday, August 16, 2012 No comments: Links to this post

The midnight raider/s were at my home again last night.

I suspect that I had been assailed by one or more raccoons.

Certainly my trash can had been up-tipped.and raided.

Certainly there was a big mess in my car port.

So I have purchased an animal proof trash can in an attempt to thwart the hungry critter/s.

I will not hold my breath, but I will keep you posted. 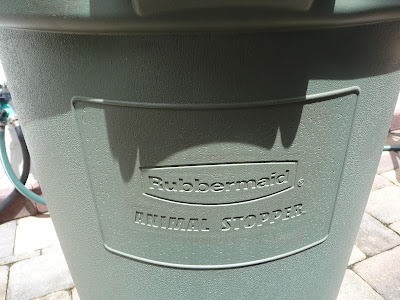 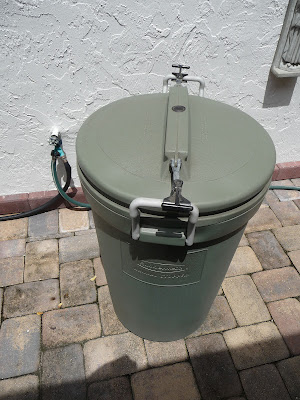 Posted by J. Michael Povey at Wednesday, August 15, 2012 No comments: Links to this post

I had scheduled a handyman to do some minor tasks around my home this morning.

One of the tasks was to remove some old and mouldy grout in between the tiles in my shower stall, and to replace it with new grout.

So I decided not to take a morning shower, so that the handyman would not have to work in a wet shower stall.

I thought that I would have what we in England used to call “a lick and a promise”, i.e. . a wash down at my bathroom’s sink.

But as I took a second morning walk with my dog at 7:40 a.m. this morning (first walk had been at 6:30 a.m.) I realised that I was dripping with sweat, and that a lick and a promise would not be enough.

My first thought was to call my friend Ben and ask if I might take a shower at his home.

Then a light went on in my mind.

That light reminded me that I have a guest bedroom and bathroom, and that I could shower and shave there.

DUH!
Posted by J. Michael Povey at Tuesday, August 14, 2012 No comments: Links to this post


Sermon today.  The biblical text was about the death of King David's son Absalom.

My God, my God, why have you forsaken me?
Why are you so far from saving me,
so far from my cries of anguish?
My God, I cry out by day, but you do not answer,
by night, but I  find no rest


How long, O Lord?
Will you forget me forever?
How long will you hide your face from me?
How long must I bear pain in my soul,
and have sorrow in my heart all day long?

Absalom was a no good son of a King.  He was handsome beyond all words, with long flowing hair, (the biblical texts says this of him “Now in all Israel there was no one to be praised so much for his beauty as Absalom; from the sole of his foot to the crown of his head there was no blemish in him”) (2 Sam 14:25].  As we enter the story today Absalom is in open rebellion against his father, King David.


Here is the background.

There had been a scandal in the royal household.  Absalom’s brother Amnon had raped their sister Tamar.  When King David heard of all these things, "he became very angry, but he would not punish his son Amnon, because he loved him, for he was his firstborn”. (2 Sam 13:21)

Absalom despised his brother for what he had done. He took Tamar into his own home. And he brooded for two entire years. Then, seething with rage he persuaded his father David into allowing Amnon to join him for the annual sheep shearing.  Absalom made a great banquet. When Amnon was suitably drunk, Absalom arranged for him to be murdered, thus avenging their sister’s shame.

Next Absalom went into semi exile for three years, after which he was allowed to return Jerusalem, but not to the Royal palace. After yet another two years, he and his father are reconciled. But Absalom’s heart was still at enmity with his father.

He already had a following amongst the people, a following which he used to his own advantage.  He would sit at the gate of the City and dispense justice as if he himself were the King.  It says that “he stole the hearts of the people of Israel”. (2 Sam 15:6).

He begins to believe his own propaganda, and enjoy the flattery of the hoi polloi. So he goes into outright rebellion.  He gets himself proclaimed King in Hebron.  David, in a panic, flees from Jerusalem.  Taking advantage of the void, Absalom is then proclaimed King yet again, this time in Jerusalem.  And as if to shame his father utterly, he sleeps with each of David’s ten concubines.

Now there is civil war, and David’s forces are winning Yet, in the final skirmish of the war King David, who has already suffered the loss of two children, orders his General to spare Absalom’s life.  Joab, the General disobeys orders and Absalom is put to death.

Absalom, the perverse and rebellious son of a King is dead.  David lets out a great lament:

That’s a lament for a rebellious son.

“O my son Absalom”.  There is probably no greater grief and  dejection than that which sweeps over a parent on the death of a child. I knew some of those parents.

* Wilson was a twin. He was aged nine when he was struck and killed by a car whose driver had lost control, back in 1988. His mother was struck by a grief, with anger at the driver.  That rage never abated.  I understand.

* Danny was a married man in his early thirties when, in 1989, he was murdered.  A light went out of his mother’s eyes, never to return. His father sank slowly into deathly alcoholism.  I understand.

* Huntley was also a twin.  His sister’s name was Maggie.  They had two older siblings, Rupert and Cameron, also twins.

The four children and their parents *Keith and Tracy Bishop began to worship at St. James’s in Cambridge.  They brought joy and life to that parish community.

In 2009 Huntley, then aged twelve went down with the flu, and was dead within a few days. Twelve year old children should not die from flu.

I know that the grief of his parents and siblings is still very close to the surface.  I know that, for whenever I look at the photo’ of him which rests on my desk my eyes fill with tears, and I begin to think “no, it’s not true, next time I go to Boston, Huntley  will be there”.

There is probably no greater grief and dejection than that which sweeps over a parent to the death of a child.

There is no “answer” to questions about the death of a child.

There is no respite from the grief which creeps up on us all unawares.

Grief is not linear.

We never move from a place of deep grief to no grief.

The smell of a muffin cooking in the oven, a glimpse of a fading photograph, the way someone looks at us, a dream about the dead child -  these and many other incidents bring back the grief in full flood.

The Priests in this congregation won’t try to bluff you.  They know that some griefs are unforgettable or inconsolable.

The biblical writers knew much about human grief. They also knew that humans are all too quick to let God off the hook in their grief.  They, unlike we, are willing to call God to task.

They often do this in a form of prayer called “lament”.  Laments are gut level, heart wrenching cries which protest to God about the misery and unfairness of it all.

They have the great value and virtue of allowing us to be deeply truthful in our prayers. We do not gild any lilies when we lament.  We “let God have it”.  We call God to task.

Laments are light years away from polite or politically correct Episcopal Church prayers.

There are many causes for grief.  But I assert again that there is probably no greater grief and dejection than that which sweeps over a parent to the death of a child.

I know that the preaching of this sermon has awakened deep grief in more than one heart in Church today.

That being so we will move away from polite prayer, and join in a communal lament for all of our griefs..

I ask you to turn in your prayer book to page 597.

Psalm 13 is at the foot of that page.  Please read verses 1 and 2 in silence.

Now, if you will, please stand, and let us read those verses out loud.

And let’s pray them again for a third time with passion, and with full voice.


We lament together as we pray:
“How long, O Lord?
Will you forget me for ever?
How long will you hide your face from me?
How long shall I have perplexity in my mind,
And grief in my heart day after day?
How long shall my enemy triumph over me?”

Thank you for praying with me this morning.


(2) A little bit about Huntley which I did not include in the preached sermon.

On my first visit to their home, Huntley, then aged 8 or 9 did all he could to ignore me. He would not look at me during dinner, and he resolutely resisted my attempts to engage him.  Later that evening, after baths and before prayers,  the four children romped in their bedrooms. Mum, Dad and I encouraged the romping. I will never forget when Huntley stood tall on the top bunk of his bed, looked down at me, and uttered his first words in my direction “Michael Povey, I like you”.

Next they stood as I requested and read them in unison.

Then, the third time they read the verses with loud voices and great passion.

(4) Sermons are oral in nature.  Therefore they do not always read well.   With any good luck a recording of my sermon will be available at http://www.bonifacechurch.org/

Posted by J. Michael Povey at Sunday, August 12, 2012 No comments: Links to this post