January 01, 2011
In my native land the date is always given in the order of day/month/year.


In my adopted land is it given as month/day/year.


It seems to me that there is a logical progression in the British system, viz: we count up days to make a month, then count up months to make a year.


Nowadays fewer and fewer people wear watches. Instead they use their mobile phone to discover the time, displayed of course in digital mode.  Thus there is a generation on both countries  who will announce the time as a series of numbers, i.e. 10:40, rather than "20 til" or "20 to".

. Of making many books there is no end

December 30, 2010
Our fabulous Sarasota County (FL) Libraries uses an automated checkout system by which receipts are issued when book are borrowed.
I kept all my receipts for 2010 and thereby discovered that I borrowed and read 54 books during the year.  One a week is not too shabby!
I major in history and biography.  This year I’ve read some biographies of fabulous women whose lives inspire me.  They include Catherine the Great of Russia, Queen Elizabeth I of England, Queen Anne (legally the first Queen of the United Kingdom).
Equally if not more inspiring have been the biographies of Anne Hutchinson (a woman who defied the male leadership of the Massachusetts Bay Colony);  of Ida Tarbell, a remarkable investigative journalist;  and of Dorothy Parker – an American ”wit” but much, much more than simply a “wit”.
In fiction I have been engrossed with the works of the great Willa Cather. I enjoyed “Death comes to the Archbishop”, (it is one of her finest novels), but her “My Antonia” charmed me even more.
I l…
Post a comment
Read more

Ladies and gentlemen, boys and girls, children of all ages.

December 29, 2010
My pal Ben and I, together with Ben’s friend Claudette (visiting from Stephentown, New York) took ourselves this afternoon to Sarasota’s “PAL Sailor Circus”.  More about that in a minute.
Before the performance we had lunch at the wonderful “Panera Bread” (just across the road from the Big Top on Bahia Vista Street).  “Panera Bread” is a fabulous franchised cafe at which the soups, salads and sandwiches are superb.  The place was mobbed, but we eventually found a table for two, around which we made room for three.  This table was alongside a wall.
Once seated, I looked to my left.  At the very next table were two women from St. Boniface Church.  We chatted for a bit.  Then I looked back, and immediately behind me were two women from All Angels Church.  We also chatted.  Next, a husband and wife took the table immediately in front of ours. “Gosh and golly” – they were also from St. B’s.
I try not to be paranoid, but it felt odd that I was surrounded by six people from the two parishes at …
Post a comment
Read more

December 28, 2010
There’s a story that sometime around 1980 a Pentecostal Christian attended an Episcopal Church with her friend from work.  During the sermon, the visitor began to utter a few fervent “Alleluias” in accordance with her heritage.
A frosty man seated in front of her turned around and glared.  “We don’t say “Alleluia” in the Episcopal Church”, he hissed.
Her Episcopalian friend squeezed her hand and said in a loud whisper “Oh yes we do, it’s on page 366 in the Prayer Book”.
Indeed the 1976/79 Book of Common Prayer offers Episcopalians the chance to express fervent alleluias; indeed “double alleluias”.  We do so between Easter Day and the Day of Pentecost (The Great Fifty Days), at the dismissal. At that point the Deacon exclaims: “Alleluia. Alleluia. Go in peace to love and serve the Lord”.  Then the congregation responds with “Thanks be to God. Alleluia, Alleluia”.
It’s an exciting affirmation of the resurrection of the Lord Jesus Christ. Thus it is a powerful liturgical moment which  the…
Post a comment
Read more

Back in the saddle 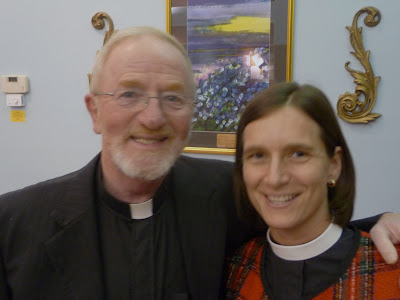 I have been back in the saddle in recent days. It was my privilege to preside at five celebrations of the Eucharist, and to preach three sermons.
Thursday 23rd Dec.  At the weekly Healing Eucharist and Sermon at St. Boniface on Siesta Key, FL.

Saturday 25th Dec.  As Presider at the 11:00 a.m. St. Boniface Christmas Day Eucharist (the Rector still had laryngitis!). (My good friend and colleague Andi Taylor the Assistant at St. B's preached different sermons at Midnight Mass and on Christmas Day.  She was smoking hot each time! [She and I knew, liked, and respected each other in Massachusetts.]