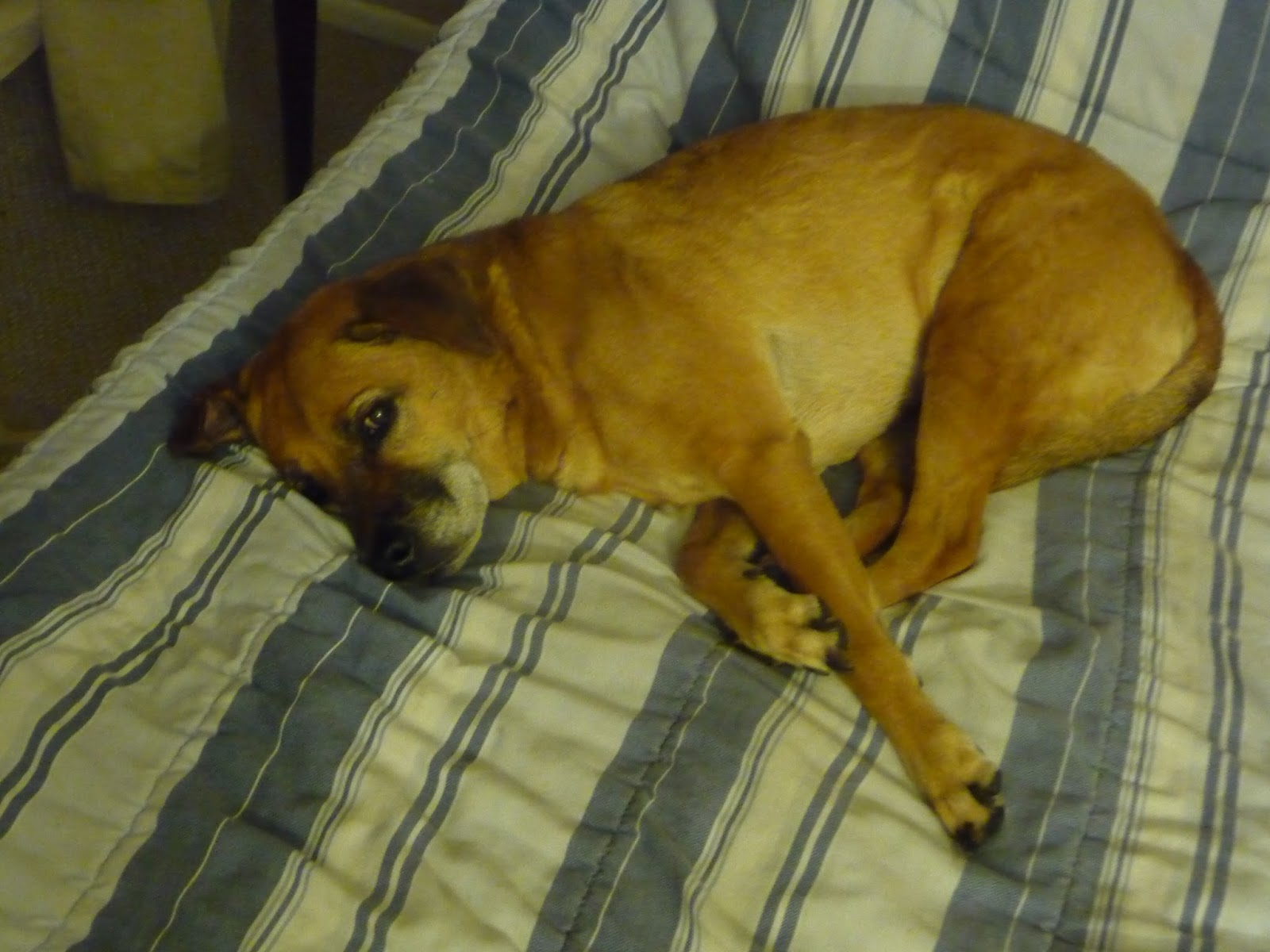 But here are some un-shaggy dog tales.
1.  When we take our first walk at about 6:15 a.m. I have to take a detour of about 100 yards so that I can get a copy of our local paper the "Sarasota Herald-Tribune" from a vending box.  (Of course I could subscribe to the paper, but I have a semi-perverse delight in dropping my 75 cents in the box). For reasons which I do not understand and cannot explain,  Penne is reluctant to take this detour. I have to tug her along.  But once I have gotten the paper and begin to re-trace our steps, Penne perks up and resumes her normal pace.
2. We frequently walk around a local pond. From time to time Penne will stop in her tracks and gaze across the other side of the pond, maybe 150 yards away.  Here is the sequence:
jmp "Penne, what are you looking at?"
No response. Penne continues to stare.
jmp  "Penne, that's another dog"
No response. Penne continues to stare
jmp  "Penne, you have seen dogs before"
No response. Penne continues to stare
jmp  "In fact, you are a dog"
No response. Penne continues to stare
jmp  "Let's stop lolly-gagging"
Penne moves on with me, but all the while she does that thing which is common to dogs.  She trots alongside me, even as her head and eyes are still looking across the pond.
Dogs can walk forward whilst looking sideways!
3. We get back to our home.  I am careful to say "this is Penne and Daddy's house".
I have been carrying a filled poop bag,
I say "wait here Penne until Poppa puts your poopy bag into the trash".  Penne, sans leash (god bless her), stays rooted to the spot, and will not move an inch until I walk back and tickle her chin.
--------------------------------------------------------------------------
My good dog is such a source of joy that I am sometimes (often?) less than active in showing affection to the cats.
Junior cat Adelaide is the talker. She is incessant in her "demands", so much so that she must think that her name is "oh shut up", my frequent cry when she mioaws without ceasing.
Senior cat Ada longs for attention. Every time I walk by her perch she moves towards me, "asking" for a caress.
In all too rare displays of affection I have, within the last hour, cradled both cats,  and showered them with  strokes and caresses.
They liked it.
But do not tell Penne. Let my affection t'wards the cats be our secret.
,
﻿
Posted by J. Michael Povey at Saturday, August 23, 2014 No comments: Links to this post

A family who were cut off from the modern world for 40 years.

http://www.smithsonianmag.com/history/for-40-years-this-russian-family-was-cut-off-from-all-human-contact-unaware-of-world-war-ii-7354256/?no-ist
Posted by J. Michael Povey at Friday, August 22, 2014 No comments: Links to this post

More beauty (or "when I was a tourist")

When I was in England in 2009 I took a couple of days off to visit the County of Dorset.  Though not well known by tourists it is a gorgeous part of England.  If  I were a rich man I would choose to live somewhere in Dorset.

A word of instruction to my American readers:

1.  Dorset is a county, but it is never known as Dorset-shire.(nor are Essex, Norfolk, Suffolk, Kent, Surrey, Sussex etc.  Not every County is a shire).

2.  The word "shire" (as in Gloucestershire) is pronounced "shure", not "shyre".
3. But when referring to English counties as a group they are (or were)  called "the shyres".
Have I confused American readers?  I damn well hope so!
Back to 2009
1. I went to Dorset to enjoy the lovely countryside (see pictures below), but more especially to visit Tolpuddle:  see ﻿ http://www.tolpuddlemartyrs.org.uk/
This is the home of men who were not (strictly speaking) "martyrs",  but who were entirely important in the history of workers who chose to combine together  (unionize?)  to resist the oppressive tactics of employers.
I am a great supporter/advocate of workers' unions and I wish that they were more powerful in the face of the oppressive policies and practices of big business.
2. I could not resist a visit to see the Cerne Abbas Giant, one of the great chalk figures of England.
Is he as ancient as some other English chalk figures?
Is he an erotic/fertility symbol?
Is he "Oliver Cromwell"?
Who knows?  You pays your money and you takes your choice. (see﻿
﻿
﻿
http://www.museumofhoaxes.com/hoax/archive/permalink/the_cerne_abbas_giant )
"Whatever!"   The Cerne Abbas Giant is a great English endowment. 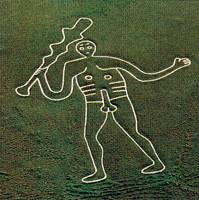 3. I also spent some time in the gorgeous town of Dorchester.  ( http://en.wikipedia.org/wiki/Dorchester,_Dorset. )
It's a lovely town and a busy place, made famous by the "Bloody Assize" of Judge Jeffreys.

My parents and schoolteachers talked about Judge Jeffreys as if he were their contemporary.
4.  I ended my visit to Dorset in the seaside town of Weymouth and Melcombe Reis. It's mostly referred to as Weymouth  but there is also the Melcombe Regis part.
http://en.wikipedia.org/wiki/Melcombe_Regis
-------------------------------------------
Here are some Dorset pictures.
Posted by J. Michael Povey at Wednesday, August 20, 2014 No comments: Links to this post

Beauty in the English Countryside

(via Anglotopia)
Check out this lovely photo of mist covering the fields and woodland and the undulating landscape near Pildson Pen in Dorset in the early morning. Pilsdon Pen is a 277 metre (909 ft) hill in Dorset in South West England, situated at the north end of the Marshwood Vale in the West Dorset administrative district, approximately 4.5 miles (7.2 km) west of Beaminster. It is Dorset’s second highest point and has panoramic views extending for many miles. It was bequeathed to the National Trust by the Pinney family in 1982.
Posted by J. Michael Povey at Tuesday, August 19, 2014 No comments: Links to this post

The United States entered World War I because of the sinking of the Lusitania right? WRONG

"Nothing Less Than War" (Justus D Doenecke, The University Press of Kentucky 2011) is "a new history of America's Entry Into World War I".

It is a magnificent book, one which I read with interest and pleasure, and through which I learned so much.

Before I say more, here is my disclaimer. Not only do I admire Justus Doenecke as a writer, lecturer and historian. but I  know him and his wife Carol. They worship at All Angels by the Sea Episcopal Church on Longboat Key - a parish at which I have often preached and presided at the Eucharist.  I respect and like them at this more personal level.

"Nothing Less Than War" is probably the most comprehensive account of all the events which led up to  the American entry into WW I.

For starters the book dispels a myth which is widely held:  America entered the war because of the sinking of the Lusitania. How often I have heard that myth, how often have I parroted it!

But the Lusitania affair was settled between the United States and Germany long before 1917.

How America  got into that war involves a much more complicated tale which the book relates with skill.

Justus Doenecke delves deeply into the mine of President Wilson's  idealism; British duplicity; German stupidity, Williams Jennings Bryan and Theodore Roosevelt and their rigidity; the congressional quagmire; raging arguments in the press ; polarized public opinion:  and the list goes on.

In short, Doenecke having researched a mass of primary sources, used his skills as an author and historian to meld them into a cogent, readable and (in my opinion) "standard" account of the events of 1914 to 1917.


Don't take my word for it!

Lloyd Ambrosius - ( the author of "Wilsonianism: Woodrow Wilson and His Legacy"  writes this:  "(the book)  is a substantial contribution to historical scholarship. It offers three major contributions: first, and excellent depiction of public opinion during these years as expressed by the press and by leaders in Congress and various national organisations; second , a comprehensive review of historical scholarship, which is integrated into the narrative throughout the chapters; and third, a clear assessment  of Wilson's leadership within this framework".

In short, Lloyd Ambrosius is saying that Justus Doenecke "did good".

I am neither a historian, nor a scholar but I agree with Lloyd Ambrosius.  Justus "did good": thus my store of information (and maybe knowledge) has been broadened and deepened as a result of reading his marvelous tome.


So, "why did the United States enter the war against Germany?
It was not because of the sinking of the Lusitania!﻿

In short,  it was because in January 1917 "the [German] ambassador to the United States conveyed a message that Germany was about to launch an unrestricted submarine campaign, thereby declaring  total maritime war against all neutrals"  ( quotation from Doenecke's  book page 250).

( N.B America was a  neutral country at the time of this German diplomatic message)

So the  German message was the catalyst which caused President Wilson to declare that America was at a state of War with the Central Powers (Germany and her allies).

America, the "sleeping and ambivalent giant",  was awakened to military action in 1917,  when she realised that her neutral vessels were subject to danger and death by the actions of German submarines.

You'll have to read the book to understand all the events and words which led up to that German communique and the eventual American response. It's a complicated tale, which Prof. Doenecke tells well.

Posted by J. Michael Povey at Monday, August 18, 2014 No comments: Links to this post

I know what it meant to say, but this is what it actually said: (giggles)

Quote from my church bulletin this morning, re a youth group sponsored car wash.

"Drive your car back to the Boniface Center after the 10:00 a.m. service where you will be eagerly met by young smiling faces ready to wash your car for a donation".

Posted by J. Michael Povey at Sunday, August 17, 2014 No comments: Links to this post