Humour via my friend Jack C 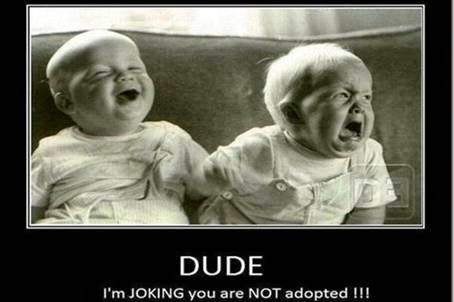 Posted by J. Michael Povey at Saturday, November 09, 2013 No comments: Links to this post

We had what was billed as a "Town Hall Meeting" at my church ( St. Boniface Episcopal, Siesta Key, FL) yesterday afternoon Nov 7th 2013. Some 240 or so parishioners were in attendance.

It was sponsored and moderated by the good Episcopal Bishop of South West Florida, the Rt. Revd. Dabney Smith, in order to address some "real, or perceived, or manufactured" crisis in the parish (the details do not matter).

The Bishop was in top form and he enabled a forum in which parishioners could speak about their joys and fears in an open and honest manner, without fear, and with courage.

One wise and perspicacious parishioner addressed us with his usual wisdom and candor.

He ended his contribution by saying that he was fifty five years old, and then by asking all those attendees who were younger than he to raise their hands.

My guess is that some fifteen hands were raised - maybe twenty. Whichever way you measure it the "young people"  (those under fifty five) were far fewer than 10% of the regular congregation.

Therein lies the truth and the rub. The  churches in the U.S.A  (of any and all stripes) are in numerical decline. ( We are catching up on Europe).

For a long time congregations in retirement areas - Florida, Alabama, the Carolinas, Arizona and the like have flourished as the folks of my Church attending generation (say 1944 - 1954)  have retired. We are those for whom Church attendance was normal and we gladly created or attended parishes in our retirement communities. We believed that this was a "natural form" of Church Growth.

That "natural form" no longer exists. The current and next generations of retirees are those who opted out of Church when they were confirmed (or much earlier).

The "crisis" at St. Boniface Church is perceived  as being matter of poor leadership.

"Stuff and nonsense!"  we are in fact living through a demographical change.

It is indeed "the end of the Church as we know it".

I believe that from this decline and death of normal and institutional  Christianity, new and more intentional forms of Christian faith and community will emerge.

They will be a Christianity in which the call of Jesus to serve   will trump the call of the culture to build bigger and "better" congregations.

That Church will be one which is epitomised  in the words of a 20th Century hymn writer, the late Fred Pratt Green (a U.K. Methodist minister)

The church of Christ in every age,
beset by change but Spirit-led,
must claim and test its heritage
and keep on rising from the dead.

Across the world, across the street,
the victims of injustice cry
for shelter and for bread to eat,
and never live until they die.

The let the servant church arise,
a caring church that longs to be
a partner in Christ's sacrifice,
and clothed in Christ's humanity.

For he alone, whose blood was shed,
can cure the fever in our blood,
and teach us how to share our bread
and feed the starving multitude.

We have no mission but to serve
in full obedience to our Lord:
to care for all, without reserve,
and spread his liberating word.

Posted by J. Michael Povey at Friday, November 08, 2013 No comments: Links to this post


"Never interrupt your enemy when he is making a mistake."


"Blessed is the man, who having nothing to say, abstains from giving wordy evidence of the fact."

"I have nothing to declare except my genius."


"Human history becomes more and more a race between education and catastrophe."


"Many wealthy people are little more than janitors of their possessions."


"The true measure of a man is how he treats someone who can do him absolutely no good."


"A people that values its privileges above its principles soon loses both."


http://www.cs.virginia.edu/~robins/quotes.html
Posted by J. Michael Povey at Thursday, November 07, 2013 No comments: Links to this post

The fundamental cause of trouble in the world is that the stupid are cocksure while the intelligent are full of doubt."

"Sex and religion are closer to each other than either might prefer."

"People demand freedom of speech to make up for the freedom of thought which they avoid."

"A lie gets halfway around the world before the truth has a chance to get its pants on."


"In the End, we will remember not the words of our enemies, but the silence of our friends."

"Whenever I climb I am followed by a dog called 'Ego'."


All via Dr. Gabriel Robins

Department of Computer Science, School of Engineering and Applied Science,  University of Virginia

One of my favourite quotations


As a young man he developed an addiction to port, about which he is reputed to have muttered when older and finding difficulty in walking in the House of Lords,
‘If I had only known that these legs were one day to carry a Lord Chancellor, I'd have taken better care of them when I was a lad’


(Information via the Oxford Dictionary of National Biography)
Posted by J. Michael Povey at Tuesday, November 05, 2013 No comments: Links to this post

It's lovely music on its own.

However as I heard it  as a fabulous organ prelude in church  two things happened.


1. I smiled for joy at Elgar's gorgeous melody   and

It was in that year that  B.B.C. radio  (not television) broadcasted (over almost half a year) an adaptation of John Galsworthy's "Forsyth Saga".

I distinctly (?) remember that my Dad, my oldest (and fabulous) sister Maureen, and I listened in every week. Maybe Mum also joined us.

The theme music for that B.B.C. radio adaptation of Galsworthy's novels was   -   yes you have guessed it  -  the Nimrod section from the Enigma variations.


Whoop-de-doo to Barbara Roth Donaldson for the  lovely music which  took me back into the happy memory land of B.B.C radio and family life  of some 45 years ago.

Not marmalade - but "tasty leftovers a la waste not, want not"

So I had to use up some leftovers - which were:

Half a cup of cooked white rice

A cup or so  of cooked lentils

Half a cup of vegetable stock

About a third of a pound of stewing beef, cut up into small pieces and browned in a skillet

Half a jar of hot salsa


All put into a big pot and simmered for a wee while.
It all made for a nice lunch today (with some toasted ciabatta bread)  and enough to spare for the next three days.
I have no name for it other than "tasty leftovers a la waste not -want not"
Thanks Mum for your good example.﻿
Posted by J. Michael Povey at Sunday, November 03, 2013 No comments: Links to this post