Life is good, but I have no blog entry for today

Posted by J. Michael Povey at Saturday, November 20, 2010 No comments: Links to this post

Many towns and cities in the U.S.A. have a branch of “Whole Foods Market”.
Whole Foods is an upscale supermarket where “organic” (whatever that means!) fruits, vegetables and meats are readily available.
Prices are high at Whole Foods.  But the chain attracts a ready crowd of middle class, socially conscious, and health conscious shoppers.  You will never find a branch of Whole Foods in the ghetto, or in a working class neighbourhood.
I was at Whole Foods today in search of some Fava (Broad) Beans which the store carries from time to time. I was out of luck for beans today, but since I was in the Market, I bought some Honeycrisp apples, and a hunk of my favourite French cheese (Morbiere). They are my middle class luxuries.
I dutifully carried a cloth bag, knowing that the princely sum of 10 cents would be taken off my bill as my “reward” for not using a store bag.
The bright young clerk/cashier asked me if I would forgo my 10c rebate, and instead allow Whole Foods to donate it to charity for the “less fortunate”.
My response was visceral.  “No”, I said, “10c is a tip. But charity calls for sacrifice.”
She was a bit taken aback and countered that all the 10c’s would mount up.
Of course she had a point.
But when I make charitable donations I do so with these criteria in mind:
I need to know when, where, and how my donation will be used.
I prefer to have some personal commitment and involvement with the charity to which I donate.
I want my charitable gifts to impact my life, as well as the lives of the beneficiaries of my charity.
Ten Cents via Whole Foods does not fulfill any of these criteria.
It merely creates a “feel good” factor.
It will take more than a “donation” of 10c to make me feel good.
I might  feel good if markets such as Whole Foods established branches in working class and poverty stricken neighbourhoods, and employed residents from those districts.
Posted by J. Michael Povey at Friday, November 19, 2010 No comments: Links to this post

Another story from Ecuador.

On my first full day in Quito (before I realised that the National Police were attempting a coup against the President) I took a cab to the base of the “Teleferico” (Cable Car).
From that base I rode the Cable Car up “Cruz Loma” to its summit (at close to 14,000’ above sea level).
There was a trail which led even higher, so I began to walk up it.
I fell in with a young woman who was also taking the upward trail.  Her name was Olivia.  I discovered that she was originally from the Czech Republic, but now lived in Los Angeles, USA.  We enjoyed an amiable chat and we decided to ascend the trail together.
After about 200 yards of upward trail I became very short of breath and energy.  So I bad farewell to Olivia and decided to walk back down to the Cable Car station.
As I walked down I encountered a woman named Simone who asked “do you speak English?”
I replied “I am English”.
With a sigh of relief Simone said “I am so worried about my daughter, I cannot find her”.
I countered with “is her name Olivia?”
“Yes” said Simone.
So, with all the bravado that I could muster I said” “Olivia is fine.  I was just chatting with her. She is climbing higher, but she is perfectly safe”.
Simone relaxed instantaneously.
I felt either clever or smug.
I had been able to reassure Simone, on the basis of a 10 minute conversation with her daughter Olivia.
From time to time we are in the right place at the right time.
Posted by J. Michael Povey at Thursday, November 18, 2010 No comments: Links to this post

More benches -- and other matters

My cousin Janet (from Bristol, U.K.) will have dinner together this evening afore going to the Theatre. She visits Longboat Key every year. This means that we’ve seen each other more often in the past five years than in the fifteen which preceded them.

The musical “Bonnie and Clyde” begins at 8:00 a.m. which is my usual bedtime. So I am posting this blog very early today.

My car is in the auto-body shop. I’ve had a couple of scrapes which need repair. No other vehicle was involved in the scrapes. But you know, those metal posts (often painted yellow) which are there to prevent drivers doing damage to shop windows etc, will persist in sliding themselves against my car door.

The auto-body shop has a deal with Hertz car rentals whereby customers can rent a car for $30 per days whilst their own vehicles are being fixed. Business must have been slow for the body shop for they offered to pay half. So I have a bright red Chevy Aveo for three days. It’s got a nippy enough engine and it holds the road very well for a small car. But how I miss having an electric lock and electrically operated windows. When did they become the expected norm?

Here are pics of a few more benches. The green one is located in a neighbouring private development. It amuses me that the Housing Association there felt the need to padlock the bench to a concrete slab.

What is even more amusing is the view on gets whilst sitting on the bench. It’s a lovely view of a wall.

The wooden and metal bench sits in my front yard. I bought for the princely sum of $50 - with “some assembly required”. 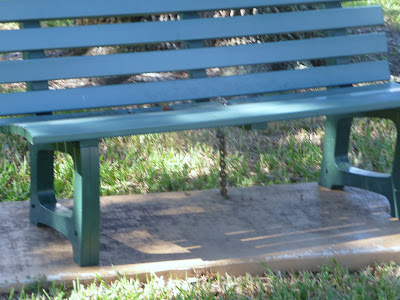 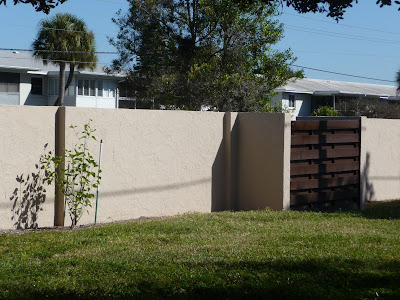 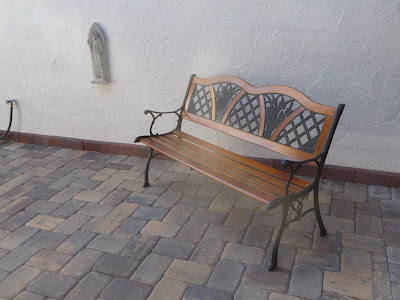 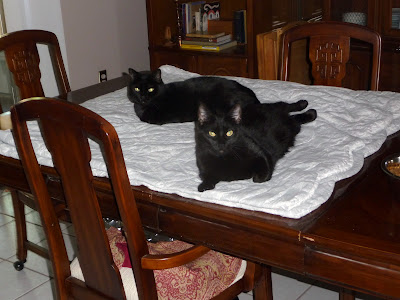 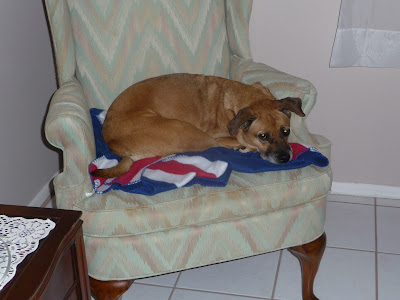 Posted by J. Michael Povey at Wednesday, November 17, 2010 No comments: Links to this post

Some are crummy, and in great need of renovation or replacement.

Some are painted in a simple green.

Some are modern - made of metal, and utterly unattractive.

But a few of them are interestingly painted. 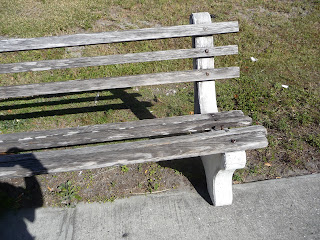 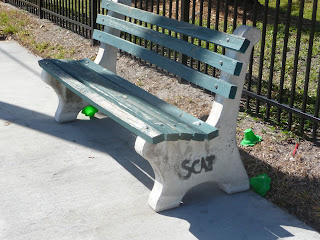 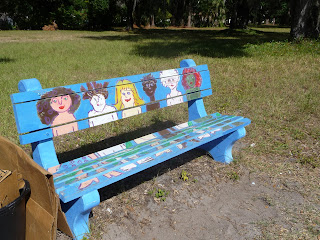 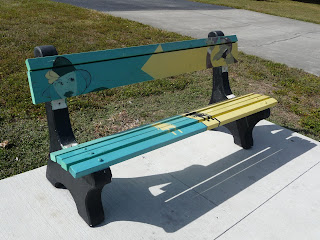 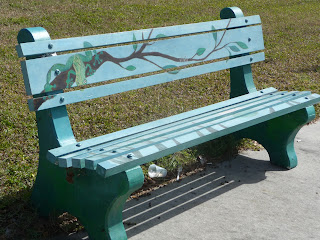 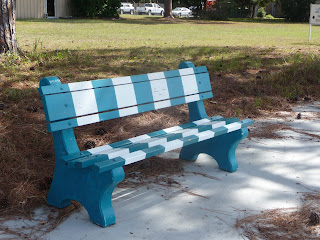 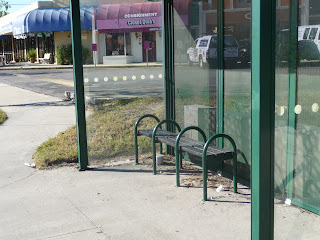 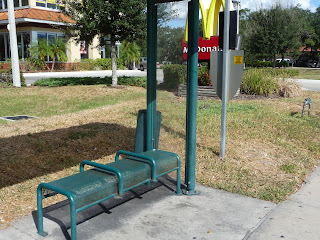 <
Posted by J. Michael Povey at Tuesday, November 16, 2010 No comments: Links to this post

Madder than hell - and immensely sad.

Regular readers of this blog will remember tales of my “neighbour from hell”.  She and I share a driveway.  Our car ports are side-by-side, with no dividing wall. She is a very angry and hostile woman.
She has cursed me out on many occasions.  She has called me an “s.o.b”; a “m-f”; a “white m.f.” – and many other nasty things.
I sometimes wonder if she is mentally ill, or if she is a problem drinker.

The there are days on which I think that she is simply mean and nasty.
This “neighbour from hell” has, from time to time, engaged various “handymen”.
I have noted that after a week or so of work, she would yell and scream at these folk.
It’s not that I am nosy - but I have been unable escape this “yelling and screaming”.  She yells and screams from within her home, and I hear it from inside mine.
I heard it again last week.  I could not miss it as she yelled and screamed at a “30-something” young man, who had been doing some work in her car-port.  I watched as he left her home.  His shoulders were down.  He seemed to be very dejected.
When I returned from a shopping trip today I saw that he was back, for he had parked his SUV in a way which blocked my driveway.  He quickly apologised and moved his SUV.
I made a guess about the situation and whispered:  “Has she shafted you?”  “Yes” he replied, “for $200, and she called me very name under the sun”.  I told him that this did not surprise me since I also had been tongue-lashed by her.
He commended my patience with such a neighbour.  I confessed that I was not particularly patient, but that I had learned to keep utterly silent in the face of her verbal abuse.
My heart went out to him.  I hate the fact that he has been treated in such a shitty way.
I was frustrated with my own powerlessness to help this young man.

Posted by J. Michael Povey at Monday, November 15, 2010 No comments: Links to this post

Meeting Jesus in the Episcopal Church.

Ted Copland, the Rector of my parish (St. Boniface Church on Siesta Key here in Florida) was away today.  He is at a well deserved retreat.
The Assistant Rector, Andrea Taylor was up-front for the 8:00 and 10:00 Eucharists.  I offered my services to lead the 9:00 a.m. Bible Study - so that Andrea (Andie) would not be over-burdened.  Ted and Andie gladly accepted that offer.
It made good sense to me to attend the earlier (8:00 a.m.) service before facilitating the 9:00 a.m. Bible Study.
At the early service “T.M”, a “forty-something” lawyer, spoke at the “Minute for Ministry” spot which is a regular feature of life at the services at St. B’s.
It’s a time at which a lay-leader gives a pep-talk about some up-coming parish activity.
“T.M” related that he had initially been dragged into Church by his wife.  He went on to speak about his involvement in a parish sponsored event at which some 20 or so Boniface Teens helped to fix up homes in a Rochester N.Y. ghetto.
That was all “fine and dandy”, but “T.M.” was not through.  He went on to speak of an Easter Day service some years ago at St. B’s. He told us that the risen Lord Jesus Christ had “zapped him” on that day (all unexpectedly!), and that he, “T.M”, had that day been converted to Jesus.  As he put it, he had “found Christ” at an Easter Day Eucharist!
As if that were not enough, “G.P” had something to say at the Bible Study.  (She had not been at the early service).
I had been saying at Bible Study that Jesus often “comes again” to us during times of crisis.
“G.P.” asked if she might add a comment. She went on to relate that some years ago her first husband had unexpectedly died of a heart attack when he, she, and their two teenaged sons were on vacation.  It was a dreadful time.
She told us that a rather “scruffy” Roman Catholic Priest had been summoned and that he had asked if he might offer “last rites”.
“G.P.” was a wee bit reluctant to agree to these “last rite” prayers because one of the two sons was a professed atheist.  Nonetheless she consented.
As the Priest prayed she felt a “jolt”.  It was a feeling which told her that all would be well despite this terrible loss.
That was all well and good, but there was more to come.  After the prayers her atheist son asked “Mom, did you feel that jolt?”
“G.P.” felt sure that she and her sons had encountered the Risen Lord Jesus Christ in that time of awful crisis as the Priest had offered prayer.
St. Boniface is not a particularly evangelical parish. Nor is it a haunt for “Jesus freaks”.
Yet today, within the space of one hour, I was privileged to hear two parishioners speak of their encounters with the Lord Jesus.
I’ll leave you to form your own conclusions.
Posted by J. Michael Povey at Sunday, November 14, 2010 No comments: Links to this post