I was at her home on Thursday 30th October for 5:00 p.m. beverages and nibbles (and to visit with her son John, who was in town with his wife Karen, from their home in Colorado). ( Karen had hoved down to Englewood FL to visit with one of her friends so she was not with us on Thursday).

Of course it was a lovely time  (and all the more so for Penne who "adores" Betty).

Betty's near-blindness is because of macular degeneration.  She voiced a concern:  "What"  she asked, "do I look like when you talk to me?"

Her concern was this:  she wanted to know whether or not she "looked" in the direction of the speaker (John or me) when we chatted. (What an unexpected and interesting question from an almost blind friend).

Then I got to be silly.  I added, "Don't worry Betty, you look like (Speaker of the U.S. House of Representatives)  John Boehner!"

American friends will "get" this wit.

Since Betty is both short in stature and deprived of sight, it is hard for her to adjust her aircon/heating thermostat.


So at her age of  91, Betty decided to investigate the possibility of getting a "voice activated"  thermostat.

Tech-savvy Betty was right, She now has her voice activated thermostat.

(I told you that she is as smart as whip.)

Posted by J. Michael Povey at Friday, October 31, 2014 No comments: Links to this post

Oh those Victorians certainly knew how to make grand buildings.  This is the interior of a London  sewage pumping station, circa 1865.
How wonderful that our forebears would create such beauty, in a building designed to pump crud!﻿
You can read about this in the link (below)........ BUT
(1) Fascinating isn't it, that the Archbishops of Canterbury and York were present for the opening ceremonies.  That says something (negative or positive!)  about the role of the  C of E in the mid 19th Century.
(2)  When I was a child my parents would talk about taking me and my twin to visit an Aunt in London. They always made reference to "Belvedere".  The Crossness Pumping Station was on Belvedere Road.  Was this where the Aunt lived?
I cannot remember if the aunt in question was "Aunt Lily Tubby", or "Aunt Lily Clarke".  In fact I know next to nothing about these two women -  except that they were related to my Mum or Dad in one way or another.  Were they part of  my paternal Povey clan, or of my maternal Finch clan?
My first cousin,  Chris Finch, is the only family member who has researched the Finch side of my family -  Mum's birth name was Evelyn Maud Finch.
APART FROM ALL THAT, the Victorian interior of the pumping station is utterly gorgeous.﻿ 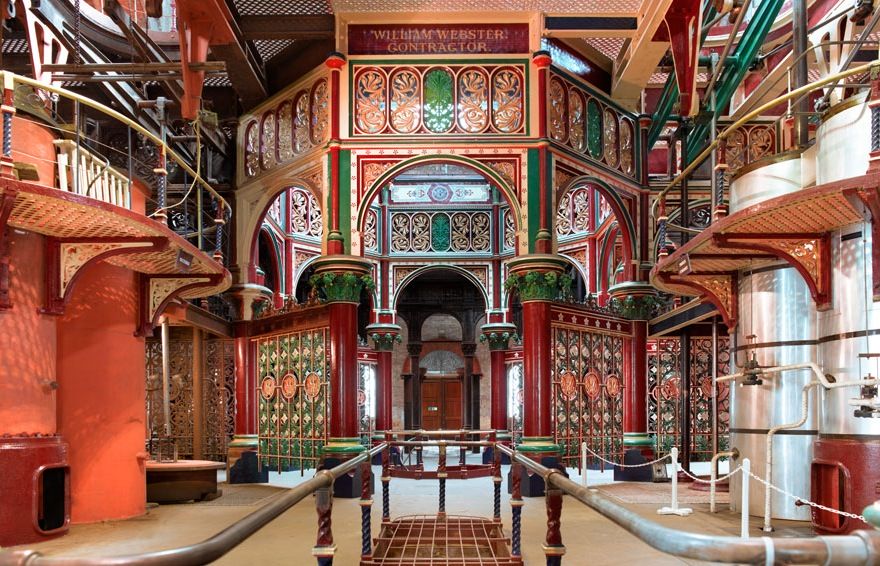 http://en.wikipedia.org/wiki/Crossness_Pumping_Station
Posted by J. Michael Povey at Thursday, October 30, 2014 No comments: Links to this post

Who's a pretty girl?

Penne went sniffing into a Plumbago shrub this afternoon.
This is how she emerged. 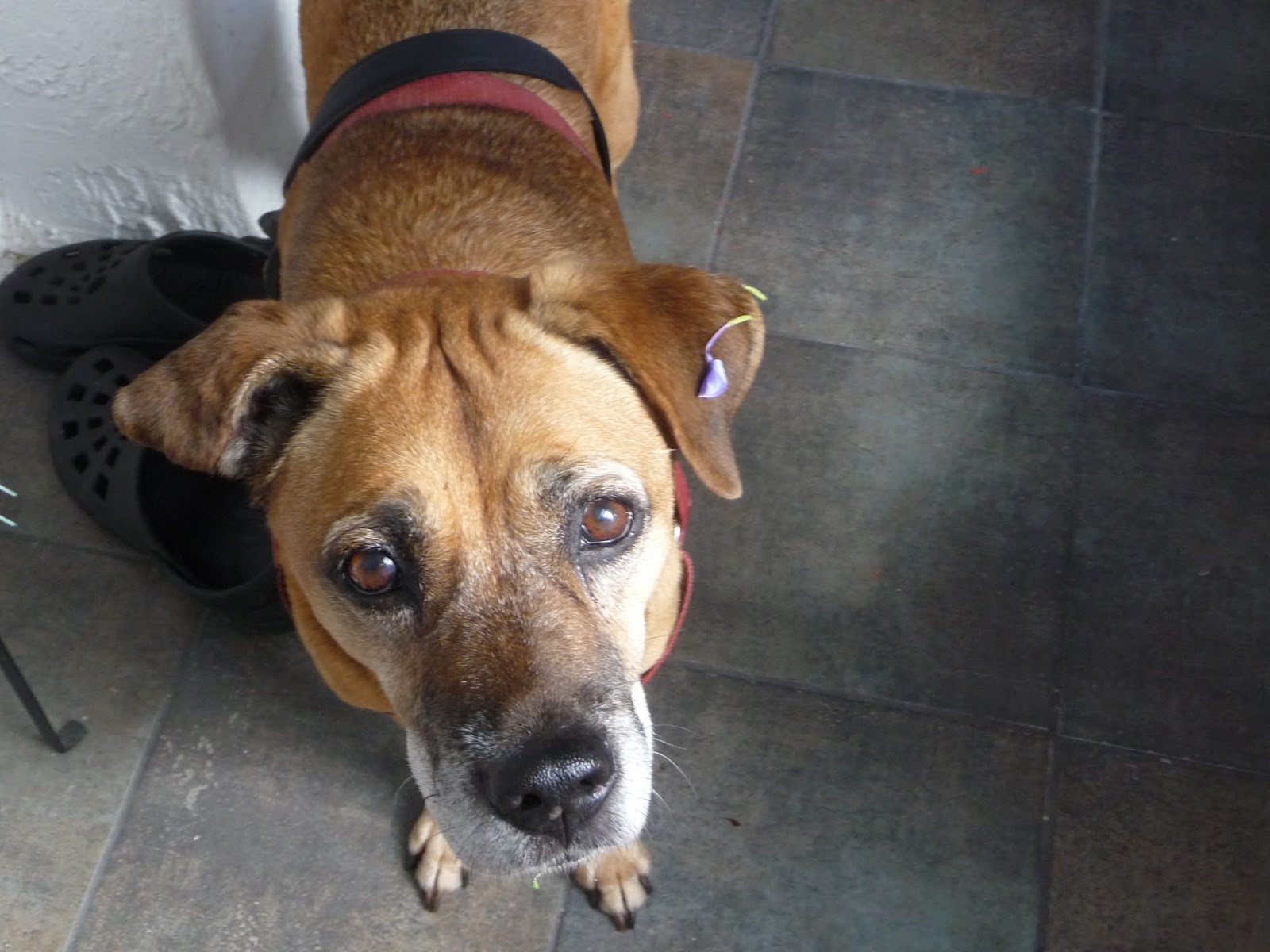 She is a pretty girl, with or without her plumbago ear decoration.
Posted by J. Michael Povey at Tuesday, October 28, 2014 1 comment: Links to this post

This America (Racism and guns)

Some years ago the Evangelical Christian magazine "Sojourners"  talked abut racism as "America's Original Sin".
They nailed it. The early Massachusetts Colonists regarded the native population as "savages".
The Declaration of Independence is a noble document, but it is  marred deeply by its designation of native Americans not as men and women made in the image and likeness of God, but (again) as "savages".
As our constitution was created,  the godly framers decided that for electoral purposes slaves would be counted as 3/5ths of a white male voter, see:
http://en.wikipedia.org/wiki/Three-Fifths_Compromise
Later on, the  infamous Supreme Court decision known as "Dred Scott" extended this racism to African slaves, see:
http://en.wikipedia.org/wiki/Dred_Scott_v._Sandford
Then there was a Civil War, the Emancipation Proclamation, and  Reconstruction;   followed in time by "Jim Crow" laws, lynching, segregation (de jure in the South, de facto in the North).
Despite the various Civil Rights laws under Lyndon Baines Johnson, institutional racism persists.
Sojourners magazine was right up to a point.  Racism is the American Original Sin.
But I need to say more than that.  I believe that Racism is in our national DNA.
In our current and dreary election cycle I have not heard one candidate refer to our endemic racism.
-------------------------------------------------------------------------------------------------
Alongside racism we are a people who are deeply devoted to the ownership and use of guns.  Thanks to the various gun rights lobbying groups  (and the craven response of Democrats and Republicans alike in the Congress and in our Fifty States)  we have become addicted to the ownership and use of guns.
I have to wonder "how many more school kids will be shot and  killed before the American DNA will mutate  from gun violence to peaceful reconciliation" .  I will not hold my breath.
This may baffle or shock my British friends, but the  following cartoon illustrates my point.("Kroger" is an American supermarket chain).  American "open carry" gun-nuts have been allowed to bear their weapons in Kroger's Supermarkets. 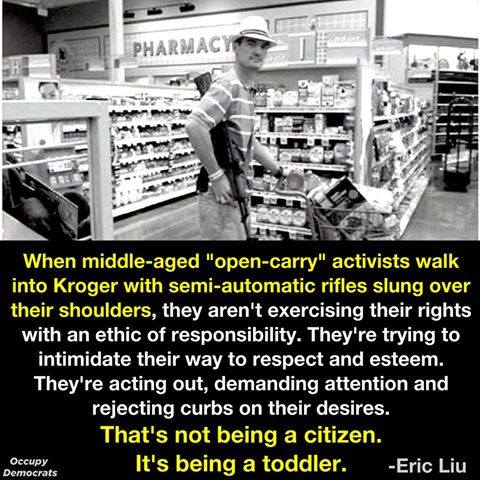 Posted by J. Michael Povey at Monday, October 27, 2014 No comments: Links to this post

An Austin Car I have known.

My post (yesterday) regarding my dream about an Austin "Westminster" car, reminded me of an encounter I had with another Austin -  back in 1986.
I was in England visiting with my family.  My American friend Joe R, who was studying at the University of Kent in Canterbury, came up to Bristol to see me, my brother Martyn, and Martyn's  wife Wendy.
Martyn arranged a car rental via a local "Rent-a-Wreck" company,  so that Joe and I could drive up to Burnley in Lancashire, there to visit with my brother Andy, his (then) wife Barbara, and their two lads Dan and Michael.
The car I had rented broke down on the M5 motorway, somewhere near Worcester.  I seem to remember that we managed to get a tow into Worcester, there to await a rescue/replacement car from the Bristol based  "Rent-a-Wreck" firm.
It was a cold, gray and foggy day.   We passed our time by visiting the Cathedral, and then hanging out at a pub.
The rescue car never arrived.  Guess what?  It too had broken down on the Motorway!
After a long, long wait  (in those days before mobile 'phones), the second rescue car eventually arrived.
It was an Austin Princess limousine, with the interior all decked out as a wedding car. By then it was much too late to go to Burnley, so Joe and I were driven back to Bristol in Austin Princess wedding car  style
Once back in Bristol I needed to call Andy to explain what had happened.
Martyn gave me the "speed dial" number to call Andy.  I hit it.
When he answered I began by saying  "I'll never again rent from that company".
As it happened I had  hit the "last call" number by mistake.
Yes indeed, the last call that Martyn had made was to the "Rent-a-Wreck" firm.  So, I was telling "Rent-a-Wreck" that I'd never again rent from them!.   Thank goodness - the owner was amused!
My good friend Joe is now 49 years old, and married to Deanne.  They have two children. He too remembers our unplanned day in a cold and foggy Worcester, and our ride home in the Austin Car I have known -  the Austin Princess.
Posted by J. Michael Povey at Sunday, October 26, 2014 No comments: Links to this post