At 4:00 p.m. on Sunday 28th August 2011 Representative Michelle Bachmann (R) from Minnesota will give a speech at the Sahib Shrine.

We will be one mile and a thousand years apart.
Posted by J. Michael Povey at Saturday, August 27, 2011 No comments: Links to this post

My niece Anne and her husband Stuart  (Anne and Stuart Weston) are visiting from London UK and are at Disney in Orlando, with their daughter Olivia.  So they drove over to see me today.  We went down to Sarasota's Marina and had a tasty enough lunch at "Marina Jacks" restaurant.

We were delighted to be together.  ( I assisted the English Parson when Stuart and Anne got wed in Bristol, U.K.)

(Anne is the youngest daughter of my oldest sister Maureen) 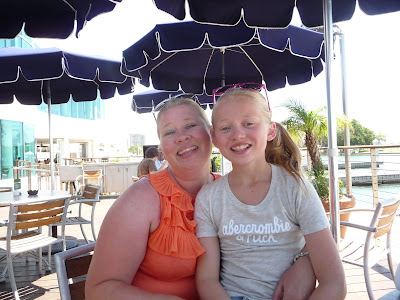 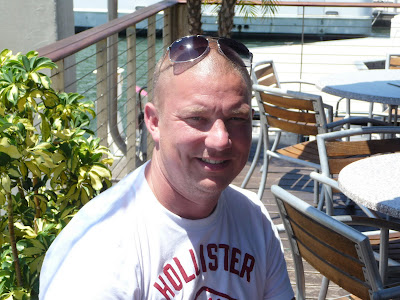 For God and Country?

The 8th August 2011 edition of the New Yorker magazine has a fascinating article on the death of Osama bin Laden.

It’s easy to forget that this CIA/Navy operation could have gone seriously wrong.

I suppose that it was “necessary” to kill bin Laden.  I hope that his death will make our world a safer place.

One part of the article made me jittery.  It’s towards the end and it reads thus:

Nine years, seven months, and twenty days after September 11th, an American was a trigger pull from ending bin Laden’s life. The first round, a 5.56-mm. bullet, struck bin Laden in the chest. As he fell backward, the SEAL fired a second round into his head, just above his left eye. On his radio, he reported, “For God and country”.


It’s the “For God” bit which worries me.


The shooting and death of Osama bin Laden may well have been good for “the country”, (i.e. the USA).  But only terrible hubris would equate American military success with the will of God.


This was at the time when USA President George Herbert Walker Bush authorised American and NATO forces to push the Iraqi army out of Kuwait.


One Sunday I attended my first and only Southern Baptist Church.  The Pastor spoke.  He said “many people have asked me ‘On which side is God in this war’?”


His answer surprised and heartened me.  “God”, he said, “is always on the side of the poor and the oppressed”.  “That”, he said, “is an answer as old as Scripture itself”.


I am certain that a Southern Baptist Pastor in Atlanta GA had a better hold on truth than any claim than any bombastic slogan such as “for God and Country”.
Posted by J. Michael Povey at Friday, August 26, 2011 No comments: Links to this post

The great Church building on Mount St. Alban’s in Washington D.C. is the Cathedral Church of St. Peter and St. Paul – the spiritual home for the Episcopal Diocese of Washington, D.C.

It is also known as the “National Cathedral”

The cornerstone for the “National Cathedral” was laid in 1907 in the presence of President Theodore Roosevelt.

In that era the American ruling classes were inevitably WASPS (White Anglo-Saxon Protestants).  At the pinnacle of the WASP establishment was the Episcopal Church.


Membership in the Episcopal Church became the jewel in the crown for successful businessmen, financiers, manufacturers, lawyers and politicians.

The Washington Cathedral is ostensibly there “for the glory of God”.   But I believe that it is also a monument to the historical arrogance of the WASP ruling classes; and to the elitism, pride, snobbery, classism and racism which is part of the DNA of the Episcopal Church.


Yesterday (23rd August 2011) the Cathedral sustained some damage in an earthquake which rattled the eastern sea board of north America.

As earthquakes go it was not a “biggy”, and I am glad that no lives were lost, nor were any people injured.

As for the damage to that heap of stones on Mount St. Albans I shed no tears

I take my cue from a stanza of a hymn which we often sing in the Episcopal Church.

The first line of the hymn is “All my hope on God is founded”.

The second stanza has words of challenge and faith which say something to me about the “edifice complex” of my Episcopal Church, and of all the other monuments (religious or otherwise) to human pride and folly. Here it is:

Mortal pride and earthly glory,
Sword and crown betray our trust;
Though with care and toil we build them
Tower and temple fall to dust.
But God’s power, hour by hour,
Is my temple and my tower.
In my world people, and families, and children are worth saving.
Clinics and schools, and homes and hospitals are worth building.
Office towers and magnificent Churches are not worth preserving.
Posted by J. Michael Povey at Wednesday, August 24, 2011 No comments: Links to this post

It will be followed by a production of

Posted by J. Michael Povey at Tuesday, August 23, 2011 No comments: Links to this post

"Facebook" is essential to western civilization, democracy and freedom of information.

Here are some "cut and pasted" comments from various of my Facebook friends.
As you read them you'll understand why Facebook is utterly important (lol)
(#'s 1 -8 are indeed the comments of these friends. I have not included their names for I know that each one of them is entirely modest about her/his profound wisdom.)
1. Is about to scare myself with a film!! Wish me luck
2.What is so hard about silencing your freaking cell phone?
3. is incredibly lethargic.
4. The ' DUDE ' was looking good !!
5. I can feel it, I know it's getting close, my little heart is beating a bit faster the anxiety is lifting, the bike is almost ready! Tomorrow we ride enjoying the freedom of the road!
6. HVAC being installed in new organ loft
7. would like to not have to go to the grocery store. And yet, if I want to eat something other than PBJ for dinner, I must.
8. Can't wait to be home tonight!!! Goodbye West Virginia... At least momentarily :)
Posted by J. Michael Povey at Monday, August 22, 2011 No comments: Links to this post