The fabulous video (below) was created by Nadia Asfour of Beirut, Lebanon.
Nadia, her sister Maia, and her parents Hani and Rula were members of St. James's, Cambridge, MA when I was the Rector.
The Asfours returned to Lebanon in 2002?
I  was privileged to have a great visit with them in 2003.  There was so much in Lebanon which I liked and enjoyed.
Nadia was then about 13 years old.  Her wonderful video shows what can be done and should be done when recycling is taken seriously.
The video energized so many memories -  taking my mind and memory back to Lebanon/2003.
http://youtu.be/h3sEzF_5-W0
Posted by J. Michael Povey at Saturday, March 29, 2014 No comments: Links to this post

Some of you may remember my references to  Bob, an older man who, from his electric wheelchair,  walks in my neighbourhood with his Wirehaired Terrier named Scout .

Scout has a visceral dislike of my Penne.  Bob knows and understand this, so we cooperate to make sure that our paths do not cross.

I have also told you about Bob's voice.  I have sometimes said that it is like a Corncrake. See

In truth Bob's voice is louder and harsher than  that of the Corncrake.  Bob can be heard from a thousand feet as yells to Scout:  "No, No. No", or "Bad Dog, Bad Dog".

Some 20 days ago Bob and his wife were driving by as I walked Penne.  Their car screeched to a halt. Bob "corncraked out" "MICHAEL I WANT TO HAVE LUNCH WITH YOU".

I could hardly refuse in the presence of Bob's wife, so I lied through my teeth, saying that it would be a pleasure, and setting a date for lunch.

That date arrived yesterday. I moaned to myself  all morning,  asking: "Why did I agree to have lunch with that old coot, old fart, old codger?"

I drove Bob to our local wonderful eatery called "Alma's Kouzine",  less than a mile away from our homes
http://www.almasrestaurant.com/
I have always liked Alma's, but this was Bob's first visit there.  He found it to be delightful.
AND GUESS WHAT
I had an entirely agreeable time!
I learned that Bob is 91 years old and is a WWII U.S. Navy veteran.  He and his wife have been married for 67 years.  They have four children and two handfuls of grandchildren.
Bob was born on Dorchester MA where his father was a Boston Cop.
After WWII and marriage Bob was at first in the retail fur business.  He was wise enough to forsake this and to move into Insurance.  He had a fine career which began in New Hampshire, and took him to Boston, New York City and Chicago.  He and his wife retired early and moved to SRQ where he began another (and successful) career in Real Estate.
HE IS A PRETTY COOL GUY EH?
Despite my small-minded  reservations I had a fine time with Bob.
I AM ALREADY A BIT OF AN OLD COOT AND OLD FART (Applause from the balcony please).
IF I EVER GET TO BE NINETY-ONE  I HOPE THAT SOME WHIPPER-SNAPPER AGED SIXTY-NINE WILL BE PLEASED TO HAVE LUNCH WITH ME.﻿

Posted by J. Michael Povey at Thursday, March 27, 2014 No comments: Links to this post

Children in the supermarket --- dammit who needs them?

"She"  stood in front of me at the "15 items or fewer" check out at my local Publix Supermarket.

(Believe it or not, the Publix signs say 15 items or fewer, not 15 items or less - well done Publix).

Well, as I was saying, "she" stood in front of me at the "15 items or fewer" check out at my local Publix Supermarket.

"She" was a slender, short and very beautiful young woman. She seemed to be a bit apprehensive. I thought that her cart was overflowing.

In front of her was a restless little boy, aged maybe four.

N.B.  I said "restless" not "naughty".  After all what four year old child is not restless in a supermarket.

Another child sat facing me from the back of the shopping cart  in that place where you stow pocket books (handbags) or shopping bags.  His legs were poking through the back end of the cart. His countenance was totally serious.  I guessed his age to be about two,

"She" began to unload her cart. It was not overfilled.  It seemed that way simply because there was a third child who was sitting in a car seat,  placed at the bottom of the cart.

"She" addressed the oldest of the three children and called him Isaac,

In the meantime I was making faces at the two year old who was facing me.  Slowly but surely his faced began to move from solemnity to broad grins. "She", his Mum, turned around and lovingly used his name.  It was Zebedee (the first Zebedee I have ever met).

"She" moved the cart forward.  Zebedee reached out and grabbed a roll of "Mentoes".

With great gentleness I took the Mentoes from his hand and  said " no Zebedee, let's put them back where they belong".   He did not protest.

"She"  his Mum turned around, smiled, and said "thank you very much".

Her few items having been  checked out, and her money given and her change received "she" moved away.

"Goodbye Isaac" I cried, and  then "Goodbye Zebedee".

Mum rewarded me with a big grin. (I have referred to her as "She" for I never learned her name.)

BUT I KNEW WITHOUT DOUBT THAT "She" IS A CAPABLE AND LOVING MOTHER.

Please God I will encounter her (and her husband)again one day.

Posted by J. Michael Povey at Wednesday, March 26, 2014 No comments: Links to this post

A murmuration of swallows - lovely video

video via my friend Muriel Q
http://www.youtube.com/embed/88UVJpQGi88
Posted by J. Michael Povey at Monday, March 24, 2014 No comments: Links to this post

I WAS the kid in the Candy Store

My English readers MWP  and Dud may well roll their eyes at this.  "Roll on pals!".
One of the good things about life in SRQ is the music of the Sarasota Opera. It is an above average regional company. Indeed some of the sophisticated ex- New York City folks who know about these matters have been know to assert that the Sarasota Opera can mount productions which are as good as, if not better than those of the world famous NYC Metropolitan Opera.  (I kid you not).
I've been taking myself to our Opera since I arrived here in 2006. There are usually five different operas each season.
This year I saw "Die Fledermaus" (Johann Strauss II)  -  so well done and so very funny.  I missed "Il Travatore" (Verdi) because I thought that I would be in Boston on the day for which I had bought a ticket. The Boston trip did not pan-out, but I had already given my Il Travatore ticket away.
The other week I heard the "Barber of Seville" (Rossini), and for once I was bored and jaded. Rossini does "go on a bit"!
Yesterday afternoon (March 22nd 2014)  I enjoyed Verdi's rarely performed "Jerusalem".  It was filled with those wonderful Verdi full voiced choruses, and the solo voices were magnificent. (I hope that "Jerusalem" will be revived by some of the major American and European Opera Houses).
TODAY I was the kid IN the candy store. The Opera was "The Flying Dutchman" by Richard Wagner. It is the very first Wagner Opera I have heard.
OMIGOD it was superb. I was on the edge of my seat for the entire three and a half  hours (which included two 20 minute intermissions).  It may be so happy that I could still be thrilled and enthralled just two months before my 70th birthday. OMIGOD it was superb.
In Opera the orchestra members are buried in the pit and often ignored, so I sought out some orchestra members during the second intermission (knowing that they would be  clearly identifiable by their dress). I happened upon a young man and a young woman from the orchestra and said "please be thanked for the wonderful pleasure you bring to us, and please pass this word on to other orchestra players".
The young woman got teary eyed as she expressed her thanks for my comments. The young man was also visibly moved and said that "The Flying Dutchman" was one of his favourite Operas and that he appreciated my tribute.
TODAY I was the kid IN the candy store at the Sarasota Opera's production of the Flying Dutchman.  OMIGOD it was superb. 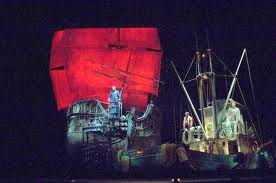 Posted by J. Michael Povey at Sunday, March 23, 2014 No comments: Links to this post