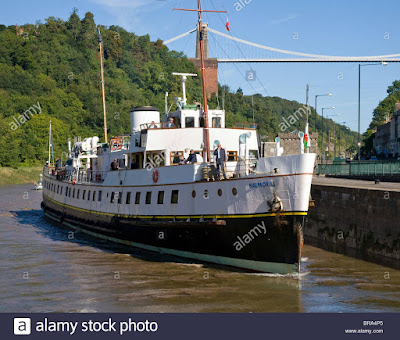 I have seven surviving siblings.  One sister, Sylvia, died soon after her birth in 1942. My dear brother Stephen died all to soon and all too suddenly last year.

Thus we are/were a family with ten children.

I have nineteen nieces/nephews.

Later this year I plan to be in the U.K.  I will see many (but not all) of this gang of fifty two descendants of my Mum and Dad (fifty three when I am included).

As I have planned this trip I have arranged to take two or three of my great nephews/nieces on a boat trip down the Bristol Avon on the M.V. Balmoral on Oct 1st.    (See the MV Balmoral  website for details of trips from Bristol).

My question for those of you who are expert in such matters is "How are Ryan, Bree, and Isaac related to eac…
Post a comment
Read more 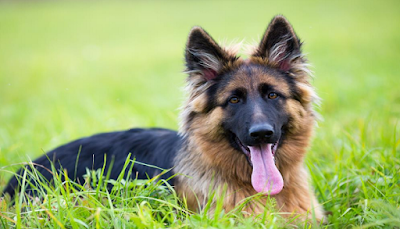 " To sleep, perchance to dream"  (Shakespeare), or in my case, "to sleep and always to dream".

I was in a big gym.  About 3/4  of the space was devoted to free weights, treadmills, and fitness machines.

I was exercising  in a corner in the empty 1/4 of the room. Across from my was a huge gym mat on which I saw a long-haired German Shepherd Dog.

He was lying down on his back,but had twisted his head to look at me.  His tail never stopped wagging.

I whistled him over, but he ignored me. I could not figure out of he was there to protect me or to attack me.

Then I "sort of" woke up.  When I got back to sleep I had the same dream all over again. ( I have no way of knowing if I had been half awake for ten seconds, ten minutes or longer, but I remember thinking "I've already had this dream").

This dream revisited went on.  I decided to leave the gym, only to discover that I was driving out of the parking lot at Trad…
Post a comment
Read more 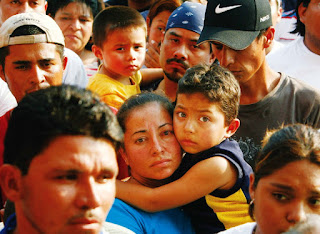 Under the current Occupant of 1600 Pennsylvania Ave, Washington, D.C the very word "immigrant" has been tarnished and demeaned.

Of course he means undocumented immigrants (I refuse to call them illegal immigrants, because although there are illegal acts there are no illegal people).

But who, in the mind of D.J.T., are the undocumented immigrants? Are they the hundreds of thousands of undocumented residents;  people from Canada, Ireland, the United Kingdom, Germany, China, and India?

You know, I know, and his acolytes know that he is referring to children, women and men from Mexico. from Central America, from some countries in South America, and from Haiti etc.

In a speech in Youngstown, Ohio earlier this week he described these immigrants as "animals".

(See the video below, and see also the apparent enthusiasm of his acolytes).

Getting my dog fix.

My friends Rick and John live in the adjoining Glen Oaks Manor community.  They have four dogs between them and they often walk out at about 5:00 p.m. Rick has two Poodles, John has two Labradors.

Yesterday (Sunday 23rd) I called to see if they were about to walk, 'cause I needed a dog fix.

They were, and I got my fix.


There is Vittone.  He is a handsome, bright and self confident Standard Poodle, and he knows it.  All the girls dogs adore him.  He is like the handsome star quarterback on a High School team.  He knows that all the cheerleaders have a crush on him.  He says (to himself) "just because I am very nice to you it doesn't mean that I'll invite you to the Prom.

Vittone is that kind of "stud" dog.  (And he loves every bit of attention I give him).

Vittone belongs to Rick, as does Louis.  Louis was the runt of his litter, and he's a bit smaller than most Standards.

Louis is the the modest, shy, self-effacing dog.  "I am a nothing and a nobody…
Post a comment
Read more

It's (vaguely) salmon, but don't' call it bacon

I picked up a package at Trader Joe's. thinking it to be Smoked Salmon. (if only I had read the label!)

Well, it is salmon (reconstructed bits?)  but by no stretch of the imagination is it bacon.


I think the same way about "Turkey Bacon''


It's "O.K" in its own right, but it should never be called "bacon". (note that it is chopped and formed).

Some Americans rave about Canadian Bacon.


It's good in its own way but I doubt that the "Canadian Bacon" made and sold in the U.S.A. would recognize the Maple Leaf Flag.

Americans encounter "Canadian" Bacon most often in Eggs Benedict. (Made well they are superb),


These days I am reduced (and delighted) to eat American Bacon


Cooked well it is entirely delicious and dripping in pork fat.  Oh so good!

Oh so good and entirely unhealthy.

That's why I sometimes eat "Salmon Bacon" and pretend that it is the real thing,
Post a comment
Read more
More posts