When my brother Martyn and nephew Sam visited me in late May/early June I commented to them about my friend “B”, and his hearing problem.


I said that “B” always asserts that "he does not have a hearing problem", and it’s that other people do not enunciate clearly.
My brother Martyn smiled and told me that I frequently asked him and/or Sam to repeat something one of them had just said.
I was nice enough to Martyn, but my thoughts ran like this “I wish that he and Sam would enunciate more clearly”.
That was then.


This is now.
The “now” is that during the past week I have become aware of a great change in my ability to hear.
1.    I can no longer hear the comforting ticking of my two wind-up clocks.


3.    In a group setting I find it hard to follow the conversations.


4.    The sounds of water flowing from the faucets/taps seem very far way, as do the noises I should hear from my computer keyboard.


5.    Lower pitched voices are easy enough to hear, but (for example) when I listen to my car radio I can hear low-toned sounds which seem extraneous and bothersome.


6.    On Tuesday 19th July 2011 I attended a Memorial Service for one of my neighbours at Sarasota’s First United Methodist Church.  I missed eight in ten of the words which the Pastoral Assistant of that Church uttered.  I was “cupping my ear” like an old fogey.  Of course it was the Pastoral Assistant’s fault.  She did not know how to speak up!

Oh sugar!   I am not a happy listener!
The optimistic side of me thinks that I am dealing with a temporary blockage to my hearing which my primary care physician will be able to make right.
The pessimistic side of me thinks that I have a real loss of hearing which will lead to a change in my lifestyle.
I’ll keep you posted.
Do you hear me?
Posted by J. Michael Povey at Saturday, July 23, 2011 No comments: Links to this post 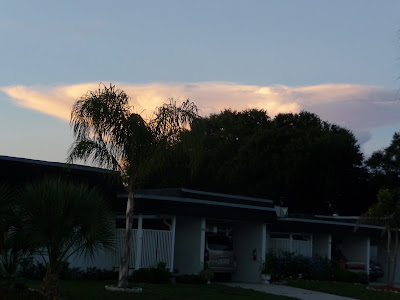 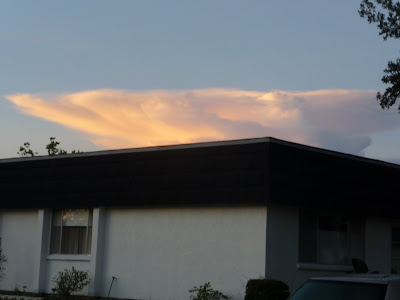 In a recent blog entry I asserted that the “Tea Party” and “Religious Right” gangs are not nice people.  I stand by that assertion.
Those who deny the rights of women to make their own choices regarding reproductive health are not nice.  In fact they are oppressors.
The denial of the full rights of women may well be the debased currency of the Taliban, of the corrupt Saudi regime, and of ghastly men in such places as Somalia.
But those denials goes against all the heritages of democratic(?) nations such as the U.S.A.
They go against all that is inherent in our (U.S.A.) Declaration of Independence; Constitution; and Bill of Rights.
I have come to believe that the extreme right / christian fundamentalist/roman catholic agenda is a threat to all our freedoms.
I know that their agenda is dangerous for the health, welfare, and freedom of women.
Indeed I think of the religious right in the U.S.A. as “America’s Taliban”.
This oppression has been on my mind all day.  It was strengthened when I was alerted ( via Facebook and my friend Susan R, to an entry via "Media Matters".
Should you be tempted to “write my concerns” off, please first connect with the following.
http://mediamatters.org/blog/201107200040
Posted by J. Michael Povey at Thursday, July 21, 2011 No comments: Links to this post

On my penultimate Sunday as Rector of St. Stephen's, Pittsfield, MA the Church bulletin should have announced a farewell event as a "Eucharist and Tea for Seniors and Shut-Ins".

One of my former colleagues tells me that, back in the days when local newspapers printed every detail about wedding ceremonies, the "Greenfield (MA) Recorder"  wrote that during a particular wedding a soloist sang the Cesar Franck version of the ancient text  "Panis Angelicus"  (Bread of Angels).

Giggle with me will you, as I report my colleague's story  that the newspaper had an "e" in the word "Panis" instead of an "a"

It does not get much better than this!
Posted by J. Michael Povey at Wednesday, July 20, 2011 No comments: Links to this post

This may not be true

July 18th 2011
Thunder rumbling in the distance: -  a lovely sound.
A brief rain-shower.
At least 30 ducks paddling in our pond.
Edamame peas, sweet potatoes, and a bit of baked cod for dinner.
Sometimes the best things in life are free and/or simple!
Posted by J. Michael Povey at Monday, July 18, 2011 No comments: Links to this post 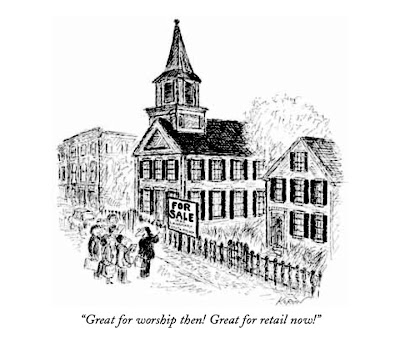 The cartoon comes via my friend, the Revd. Bob Ginn.
Its immediate reference is to the closure of Roman Catholic Churches in Massachusetts.
But it could also be apropos to Episcopal Parishes in the Diocese of Western Mass, (where I served for 24 years), three of which have recently been closed, and many
of which are marginal and “hanging on by a thread”.
In the Diocese of Massachusetts where I served for six years, three parishes have recently been closed - long after their “sale by” dates.
Meanwhile back in my native city of Bristol, U.K. I can think of a score or more of C of E, Baptist, Congregational/URC, and Methodist Churches which have been shuttered in east Bristol (localities such as Lawrence Hill, Barton Hill, Easton, Whitehall, Eastville, St. George, Fishponds, Hanham, Kingswood, & c).
Protest as we may, none of these closures have happened because of matters of doctrine or belief.
Churches are also closing because fewer and fewer of us are "joiners" and participants.  We prefer to be spectators!


(Social clubs, masonic organisations, parent-teacher associations, sporting clubs etc are also showing signs of decline in membership).
Churches are closing because of demographics. Congregations are aging both in the U.K. and the U.S.A.
I, for instance,  am at the tail end of a generation for whom “Church” was a norm as a measure of social behaviour (even if they did not attend).

The generations who follow me are finding that the Church is incomprehensible. They find that their lives are perfectly fine “sans religion”.  They simply do not
understand the need for God, for faith or for Church.
(*)


(1) Contrary to what you may read,  the more evangelical churches are also showing signs of attendance decline in the U.S.A. Even the Southern Baptist Churches are losing members.
(2) There is some growth in the Roman Catholic Church in the U.K. and in the U.S.A.  This is chiefly because of immigration (Latinos in the U.S.A., Polish folks etc in the U.K.).  Meanwhile in the old Roman Catholic strongholds of cities such as
Chicago, Boston, New York, parishes are being closed hand over fist.
Posted by J. Michael Povey at Sunday, July 17, 2011 No comments: Links to this post

At my parish this morning the bulletin included the text of an anthem the choir sang.


Instead it read "I shall not fear the ballet if thou art by my side"
Posted by J. Michael Povey at Sunday, July 17, 2011 No comments: Links to this post