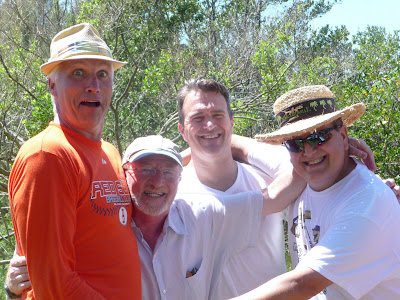 Back in about 1978 the Tienhaara Boys began to attend the Church of the Good Shepherd in Fitchburg, MA, with their father Richard, and step-mother Barbara. The family never became Episcopalians, but the Church of the Good Shepherd was a good “way station” for them at that time.
The “Tienhaara Boys” of 1978-ish were Richard who was aged about 18 or 19, Sean (maybe 17), and Bryan – a wee bit younger. Each of them was (and is) over 6’ tall.  They delighted in giving this 5’8” Michael Povey a group hug at “The Peace” – dwarfing him in the middle of their hugging triangle. I left Fitchburg, but have stayed in touch with Richard (jr).  He was a basketball star at the University of Lowell (now U.Mass Lowell), and later at Clark University in Worcester, MA.  There he met his future wife Elizabeth.  I co-officiated at their wedding on Long Island in 1984. (Richard is the only one of the three who met my late mother.  It was on one of her visits to Pittsfield.  R is about 6’7” and he and I will…
1 comment
Read more

I am utterly opposed to tolerance

April 01, 2011
I’ve come to dislike the idea that the cardinal christian and/or human value is “tolerance”.I find it dangerous to be tolerant of my own sins, weaknesses, pride, and prejudice.
I find it very hard to be tolerant of bigotry, of greed, of nationalism, of violence.
But I am utterly opposed to tolerance when  it comes to my encounters with people of ethnicities, religions, sexualities which are not the same as mine.
For it is often the “majority” which states: “we are very tolerant”. But many minorities feel very patronised when they are told that they are tolerated.
So, at least in terms of inter-personal relationships and interactions with those whose ethnicity, religion or non-religion, background, and life experience are not the same as mine, I refuse to be simply tolerant.
Instead in these interactions I want to cultivate two other values.  The first is an attitude of respect. The second is the ability and willingness to listen.
My hope is that these interactions will prod me towards beco…
Post a comment
Read more

A priest "parties" in Lent

March 31, 2011
We are still in the Church season of Lent, a time for prayer, reflection, and fasting. I used to be horribly pious about this. Not just pious, but also quite self righteous.  Forgive me please!  Now that I am growing up I am also “letting go”.  So I was pleased to accept an invitation to a party which took place last night. (“A party in Lent?”:-   please do not tell anyone of the four Bishop to whom I report [three in Massachusetts, one in Florida]  of my abject failure!). The party was for Jerry who was celebrating his 75th birthday.  I like Jerry and his (male) partner Dell very much.  But we are not close friends so I was tickled pink to be on the guest list.Jerry and Dell live on Tanglewood Drive, here in Sarasota.  I had always thought that this was a plain and ordinary road, filled with plain and ordinary houses. But as I drove south on Tanglewood  Drive,  from Webber Street  I discovered a most delightful part of Sarasota. Dell and Jerry’s home is on a part of Tanglewood Drive …
Post a comment
Read more

March 30, 2011
(Resurrection House is a day shelter for homeless people here in Sarasota.  I am the chaplain there.)He sat next to me at the prayer service at Resurrection House this morning. He was a big man, probably in his fifties. As we prayed he began to sob.  I placed my left hand on his shoulder.  He spoke through his tears.  “Can I ever be forgiven?” was his repeated question. He had been a helicopter pilot in the U.S.A.F during the Vietnam War.  His brother had been drafted, so he volunteered so that his brother would not have to serve.  (There was a policy not to have two people from the same family serving at the same time).  “Can I ever be forgiven?”    He was haunted by the knowledge that his military actions had caused the deaths of young Vietnamese children. “I killed young innocent children” was his cry. I listened carefully, and I assured him that he had already been forgiven.  I expressed the hope that he would meet those children in “heaven” and be able to tell them that he was so…
Post a comment
Read more

The Silent Church (4) (and last for now)

March 29, 2011
This is my final post for now on the Silent  Church. My mind has been alerted to this silence as I have recalled the heroes of the Civil Rights and Anti-Vietnam War movements.  I have thought in particular about a Rabbi – Abraham Joseph Heschel, two Catholic Priests – Daniel and Philip Berrigan, and a Protestant Minister – William Sloane Coffin.  You can read more about them below. Of course they are four white males.  There were next to no female Rabbis or Ministers in their day.  And I am not ignoring the great Negro leaders – Martin Luther King, Jr, Ralph Abernathy etc.  But many of my readers have never heard of Heschel, the Berrigan brothers, or Coffin.
These four men refused to be silent in the face of injustice.  And they were willing to put their money alongside their mouths, knowing that other religious leaders would disdain or despise them, and that the civil authority could imprison them.

It is not my purpose to argue whether or not they were right.  What is important to me i…
1 comment
Read more

March 28, 2011
My parents told us about the German V1 and V2 rockets which were launched against targets in England during World War II.I can find no evidence for or against the idea that our home City of Bristol was hit by such rockets, but it seems unlikely since the V1 had a range of about 100 miles and the V2 a range of 200.Such rockets were launched from France, though some V I’s were launched from aircraft flying over the channel or over southern England.
What I “got” from Mum and Dad was the idea that these rockets were somehow “unfair”.It was one thing for “a plucky RAF fighter pilot to attack German bombers”, but another thing to be attacked by rockets against which there was no defence, ( except that RAF pilots could “tip the wings” of the slower VI, and I gather that they became adept at this).
But my parents were on to something important.There was an idea, developed by philosophers and theologians that although war might be the inevitable last resort, there ought to be some sense of propo…
Post a comment
Read more

But I am too angry to be coherent

March 27, 2011
I am so angry about the silence of the Church in the face of our aggression in Iraq, Afghanistan and Libya.Why is the Church so obsessed with sex, but so unconcerned  with Euro/American militarism?Thereare days on which I want to abandon organised religion.
Post a comment
Read more
More posts