I am reading “Trouble in Mind – Black Southerners in the age of Jim Crow” (Leon F. Litwack/Alfred A Knopf/ 1998)

I can scarcely read Litwack’s book more than a chapter at a time.  It is a horrific tale of the subjugation of Negroes (the then normal appellation) from the end of Reconstruction


until the modern Civil Rights era.

I was well aware of a history which included the white enforced racial segregation at all levels; the perversion of justice (laws, voting rights, etc) against Blacks; the separate but unequal educational system; and the myriads of petty restrictions designed to “keep Negroes in their place”.

I also knew a bit about lynching.  I always thought that it was nasty and illegal, but I had never known that lynching also involved dismemberment: (the cutting off of fingers and genitals, the gouging out of eyes etc.) , before death.

I had thought that lynching was  a matter of “simple hanging”. Litwack’s book reveals that in many cases it was a matter of being  vilely tortured, and then being hung or burned alive.

That was Jim Crow.

Here I include a bit from David Remnick in the  November 2, 2009 edition of the “New Yorker”. Remnick reflects on the reaction of the brilliant scholar Cornell West to Barack Obama’s candidacy for the Presidency last year.

West campaigned for Obama in Iowa, South Carolina, Illinois, and Ohio, but he was dismayed by (Obama’s)  speech on race in Philadelphia. West thought the speech was politically “masterful,” but “intellectually, it was pretty thin.” He kept his thoughts to himself, but he was especially annoyed that Obama had said that the Reverend Wright was full of rage, because he was somehow stuck in time, still wrestling with Jim Crow, and that he equated black anger with white resentment.

“Have you seen the young brothers and sisters in prison, on the block?” West said. “I don’t mind being an angry black man in terms of having righteous indignation at injustice, given the situation right now in the country. But as a candidate  (Obama) had to distance himself.

There have been excesses of affirmative action and so forth and so on, but Jim Crow de facto is still in place. . . . Who are the major victims of that? The poor—disproportionately black and brown and red. You got to tell the truth, Barack. Don’t trot out this shit with this coded stuff!”

And yet, West said, “I intentionally remained relatively silent. It was a very delicate moment.”

Professor Cornell West is correct.  Despite “affirmative action and so on”, Jim Crow still rules.

I went down to Sarasota's bay front today to take some photo's of our annual exhibition of sculpture.

Most of the works are abstract, a real challenge to those for whom the most accessible sculpture is  realistic, i,e, that which depicts  kings, animals, saints, beautiful women, and angels etc.  Such sculpture seems to be self-explanatory: thus we do not seek for "meaning"

Abstract sculptures confuse us, especially  if we believe that all art must have an immediate and obvious meaning.

"Meaning" is not a terribly helpful concept as we encounter art.  A sense of "appreciation" may be more helpful.

(I believe that the same is true in the world of G-d, religion, the bible etc.  In our response to the holy,
appreciation may be more fruitful than meaning.)

After all (as some famous person once said) "who can explain a rose?". 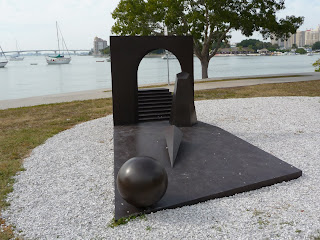 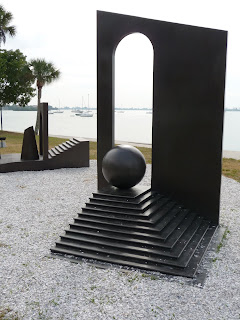 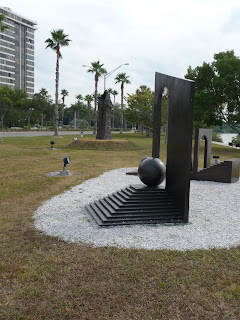 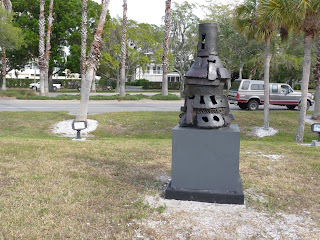 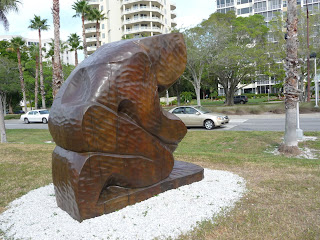 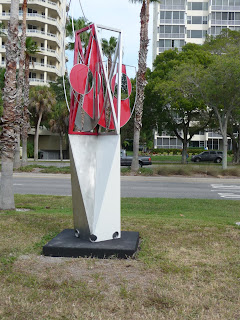 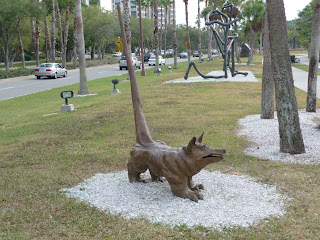 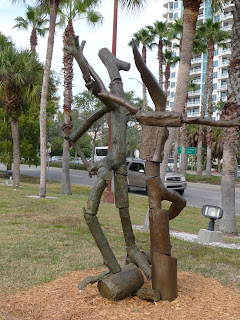 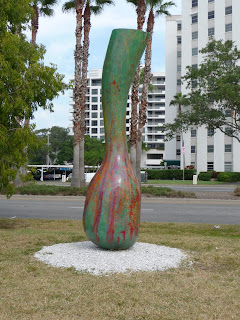 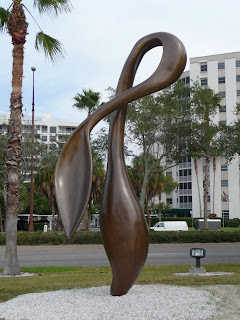 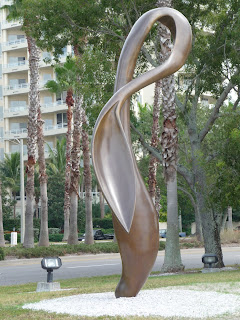 Posted by J. Michael Povey at Friday, November 20, 2009 No comments: Links to this post

Why the f-ck am I a Christian?

I grew up in an Evangelical/Fundamentalist Church known as the “Plymouth Brethren”. These days I am not a fundamentalist, nor would I be recognised by many mainstream evangelicals as “one of them”. I sometimes wonder why I am even a Christian.


I am not a fundamentalist. Strange to say, it was my evangelical seminary, St. John’s College, Nottingham, U.K. which enabled this change. St. John’s made me fully aware of critical biblical scholarship, so that I could no longer affirm that the Holy Scriptures were without error
.
Nor am I am an evangelical. Truth to tell I am, in the sense that I confess Jesus Christ as Lord and Saviour. But I am not, in the sense that evangelical Christians make false assertions and promises.

Here I report a false assertion: As recently as May of this year an evangelical sister of mine asserted that I should “repent” of being gay. As her words came at the end of a lovely family celebration of my 65th birthday, I chose not to argue with her and simply thanked her for her care.

Had the venue been different I would have protested to her.

I would have said that no person should be asked to repent of “who they are”.

In other words, I believe that some people are intrinsically gay or lesbian, by the will of God, and by the fabulous creative processes of God which we call “evolution”.

In that light I reject the evangelical promises, that God will make gay people straight if they pray hard enough.

Goodness gracious I prayed “hard enough” for 20 or more years. I prayed that God would make me “straight”. After all those years of un-answered prayer I had to believe that the evangelical promise of “change” was false.


I wonder why I am a Christian.


For Christianity continues to spawn and encourage homophobes.

Some homophobic Christians are fundamentalists, such as the members of the odious Westboro Baptist Church (see http://www.godhatesfags.com/ )

Other Christians are in those evangelical Churches which assert “hate the sin, and love the sinner”. Statements such as this are rooted in an inhumane and unbiblical dualism.

Then there are those mainstream Christians in Churches such as my own Episcopal Church. They are soft enough to welcome gay and lesbian Christians. But not one of them in which I have served or worshipped have been hard enough to go to bat in the public arena for we gay and lesbian disciples of Jesus.

Evangelicals insist that that should change.

Meanwhile, young kids are brutalised and murdered because they are gay.

See http://www.baltimoresun.com/news/maryland/baltimore-city/bal-md.ci.mattison18nov18,0,4221135.story
Posted by J. Michael Povey at Thursday, November 19, 2009 No comments: Links to this post

Homeless people are yet again being harassed in Sarasota (once named America’s Meanest City).

My homeless friends often spend time in our public park at Five Points, and at our public library. I observe them behaving as “normally” as any of us do.  They chat, they laugh, they occasionally have public quarrels;  in the library they read or use the computers for job searches.

I enjoy meeting them as I visit the library or the Opera House across the street.

Their offences against public ordinances are those of which people with homes are also often guilty – e.g.  public urination  ( I’ve done that!) and  violating our open bottle laws (i.e. drinking on the streets or in the parks – an offence which I have frequently observed by “nice people” on Siesta Beach).

A number of them were recently cited for littering -  because they dropped cigarette butts to the ground.  It seems curious that (apparently) prosperous shoppers or restaurant customers are never cited for this form of litter.

When stressed they are sometimes a wee bit obnoxious - and so am I.

The homeless commit next to no violent crimes such as assault and battery, or “mugging”.

One business owner has launched a campaign to rid down town of homeless people.  She claims that their presence is deterring shoppers (notwithstanding that we are in a recession, and that her store carries high-priced top end clothing which may have something to do with her lack of business).

Luck may be with her.  The sidewalk which runs along one part of her store is legally private property.  It was deeded in a civically dubious way to a company called “Whole Foods”, as a sweetener, designed to persuade them to locate downtown.  The Police Lieutenant whose “brief” is to deal with homeless has suggested that Whole Foods exercise their right as the sidewalk owners by having homeless folks cited for “trespass”.

(He also had the bright idea of removing some of the benches in the park so that homeless people would have less incentive to use the park).

Some of the responses by Sarasota citizens (as expressed in our local newspaper) have been equally creative.  One writer suggested giving homeless people a ‘bus ticket out of the County, on the understanding that they would be arrested if they returned within one year.  Another writer said that we should send the homeless to Newton where he asserted “all the other losers live”. (Newtown is our predominately black neighbourhood).

All this begs the question of how such suggestions would be implemented, and at what cost of money and time to the police force.

It’s hard also to know how the authorities would identify someone as homeless. It seems certain that the first time a “non-homeless person” was cited or arrested for trespass on that particular sidewalk there would be hell to pay.

The larger questions are not being addressed in the current local debate.  These questions have to do with the failed nature of our economic system which needs a permanent underclass in order to operate.

And they have to do with the constitutional rights of all Americans.

Meanwhile, Sarasota strives to regain her listing as “America’s meanest City” and here (as in many parts of the United States) homelessness is viewed as the major crime.

Just been going through some old photo's and found this one of my mum, Evelyn and my step-father, Len.

I am sure that it was taken in England, maybe 30 years ago.

I tend to remember my Mum as she looked in old age, and this was a nice reminder of a younger Mum. She was a lovely looking woman. 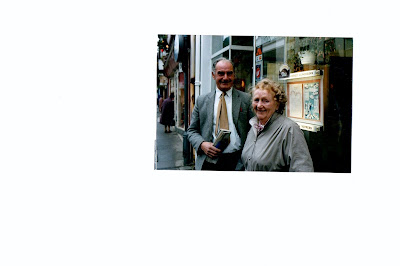 Posted by J. Michael Povey at Monday, November 16, 2009 No comments: Links to this post

Pittsfield MA Two of the best

Every now and then I check the Berkshire Eagle, a daily newspaper which is based in Pittsfield, MA, a city in which I lived for 16 years.

Russ Bousquet and his wife Jean lived across from me for the 15 years in which I lived on Waverly Street.

They were the finest people and the kindest neighbours that one could hope to meet.  We shared a love of gardening and they were delighted when I began to improve my front and back yards which has been neglected for a few years.  Russ spent his life doing good for other people, and inspiring them to do even more good.

Herb Fishman and his wife Ceil were amongst the finest of many fine people at Congregation Knesset Israel.  Their devoted practice of mitzvah led them to be the first of many Jewish people who served at St. Stephen’s Table -  a community meal in the Church where I was Rector.  Herb was a big man with a big heart.

I am grateful for the ways in which these men enriched my lives.  Here are their obituaries.

Posted by J. Michael Povey at Sunday, November 15, 2009 No comments: Links to this post