From the religion page of our local paper today.

Yesterday's blog was entitled "Evening Peregrination".  One of the readers posted that my blog was extending her vocabulary. That's terrific.

Peregrinate has long been one of my favourite words.

When I was the Rector at St. Stephen's in Pittsfield, MA I would often say to one of our lay ministers  - (the late Phil Desch) - "I am about to peregrinate -  it's now legal for consenting adults".

Phil understood my humour -  i.e.  the subliminal  idea that peregrinate sounds a bit like a dirty word.

The word is rooted in Latin  from "per" (through)  and "ager" (field):  hence referring to one who is a foreigner ( e.g. she/he who  travels (wanders)  through the fields,  rather than on the Roman Roads).

Thus the English language word "peregrinate"  emerged.  It means  journeying from place to place, or wandering, or traveling.

It's not hard to see that the English language word "pilgrim" comes from the same Latin root.   A pilgrim wanders around, traveling from place to place.

The word is also used in the avian world.  Most of us have heard about  "peregrine falcons".

And  the word emerges as an identifier of a particular form of  Psalm Chant  known well to Anglicans and Roman Catholics.   That chant is called "Tonus Peregrinus".  It is a chant in which the tone sung by tenor voices "wanders around".


So there you have it!
I'll think of you in my daily peregrinations.﻿
Posted by J. Michael Povey at Friday, October 18, 2013 1 comment: Links to this post

'Twas nicely cool by 6:45 p.m.  so I decided to take Penne for a peregrination (or promenade) around the neighbourhood.

The world and her husband had the same idea. This was nice for Penne, she was able to receive lavish attention from some of her friends.

First there was Aldo. He lives in a neighbouring community, where he also serves as their handyman. He was out and about in his golf cart plus trailer. Family members Martyn and Sam will remember that Aldo's wife Enid baked a wonderful carrot cake for our 2011 party. Aldo likes Penne and Penne loves Aldo.

Next it was near neighbours Howard and Shirley. They are snow birds, so I have not seen them all summer.  They too are fond of my dog.  Howard and Shirley have been married since 1946 (in which year I was two years old).

Then we encountered Margaret Ford from Oldham, Lancashire. She has not been out and about in while. Margaret was without her beloved Westie "Sophie". I discovered that Sophie had died last April.  Margaret got very teary.

Finally we met another Sophie, this time a neighbour woman whose husband died about a year ago. She and Penne are "best friends".

As we completed this slow circumnavigation of the pond I noticed that Aldo was hung up in conversation with a man who had been chatting for at least 15 minutes.  I called out "hey Aldo, do you have a minute?"  He sped down to meet me and I said "Aldo, I was simply trying to rescue you 'cause I know you have work to do".  Aldo had already "sussed" my reason in calling him, and he was full of grateful laughter.

We do not have gorgeous autumn leaves here in S.W. Florida.  But a tree known as "Golden Shower" (Cassia fistula) gives us a gorgeous autumnal display of seed pods.  This one is just up the street from where I live. 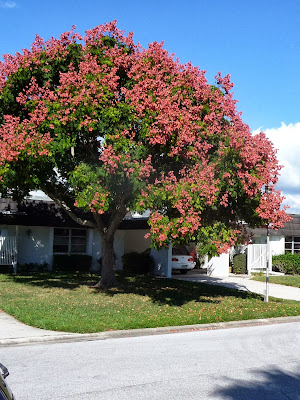 Posted by J. Michael Povey at Thursday, October 17, 2013 No comments: Links to this post

Posted by J. Michael Povey at Wednesday, October 16, 2013 No comments: Links to this post

Most of what I read and hear  (in newspapers, on the internet, on the radio and T.V. etc.) about life, politics, and current affairs is little more than propaganda  from the right wing and from what passes for a left wing.

In a like manner, many of the sermons I hear in various Churches are also rooted in dreary and deadly propaganda (rather than in  life giving "good news").

BUT THANK GOODNESS I can encounter truth from sources apart from the popular media and the compromised Church.

Here for instance is the wisdom of a nineteen years old man.   I knew him and his family when I was a Rector in Cambridge, MA.  Since those days (2000 - 2006) his family has lived through deep grief and trials; and has been blessed with wonderful wisdom and joy.

Here is some of his wisdom as expressed yesterday.

"It can be hard to stay motivated and positive in life, but I'll be damned if I let anything get in the way of who I want to be. I have to keep on moving forward, no matter how hard it gets... and sometimes that can feel impossible. Some things wear you down over time until you can't breathe anymore, and you just want to lie in bed and not do anything or see anyone... because you feel like none of it matters. You just can't convince yourself that its worth it to even get up. True emptiness, ...But that's the biggest lie in the world, because every single thing in life matters, because it's your life, and life is precious, and when you value your life and everything you do no matter how small and insignificant it may seem, it gives you so much more purpose.

I am so, so, so thankful that I have close friends and family that I can rely on when I'm going through tough times, that can help me "get out of bed" and put color and music back into my life. The very fact that other human beings care about me is enough to put a smile on my face at the end of the day, and gives life meaning to me... truly makes me feel whole again."


Love and thanks to you from your former pastor.    I will strive to learn from you.
Posted by J. Michael Povey at Tuesday, October 15, 2013 No comments: Links to this post

2013 Columbus Day Holiday in the United States of America.

A Public Holiday.
No mail/post today.
The banks are closed.

It  is holiday for school children.
Yet
The stores and shops are open.
Trade and commerce has continued as ever.
What goes?

It's Columbus Day of course.

A day on which we are supposed to celebrate the Western European conquest of the NEW WORLD.

It was a lovely, sweet and gentle conquest (cynical and wry smile) unless you were Aztec, Mayan, Inca, or " any Original Inhabitant" of  "The Americas.".

In which case it was a day of disaster,  from which European arrogance trumped your traditions, ways of  life,  and beliefs.

WHY, OH WHY, do we of western European heritage negate and dismiss the ancient heritages  of  the peoples which we "conquer"?

John Hill, one of the News Anchors  for our local T.V. station SNN (Sarasota Network News?) commented on a syndicated story from Alabama,  about a man whose home garage was demolished when a passing tractor-trailer overturned.

Hill reported  that the man had an "unexpected surprise".


Say what!
I  may have missed something, but I have never had an "expected surprise"!!
Posted by J. Michael Povey at Sunday, October 13, 2013 1 comment: Links to this post