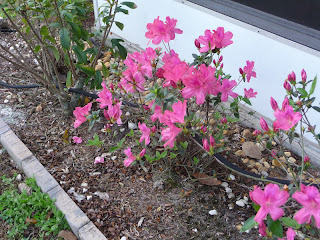 In 2010 I bought three Azaleas and planted them where I could enjoy them from the screened in porch at the back of my home.
‘Twas not necessarily a good purchase as azaleas do better in cooler climes. “Down here” in Florida we are lucky if the blossoms last for a week or ten days.
Nonetheless it is wonderful to enjoy their brief beauty, and they are looking good today.
It is “Sic Transit Gloria Mundi” for these lovely plants, and for all of us.
Yesterday I was at a Memorial service for an eighty five years old man. I had gotten to know him in one of the Episcopal Church parishes in the Sarasota FL area.
This man was from Kansas.  He served in the U.S. Army from 1944 (when he was 18 years old!) until 1952. Then he studied law at Washburn University and was admitted to the Kansa Bar in 1955.
He and his wife (who yet survives) enjoyed two children and five grand-children. He was a “peach of a guy” - part of the “Greatest Generation”.  He lived from an innate modesty – no boasting, no braggadoc…
Post a comment
Read more

February 24, 2012
Food
1 .So I made up a mess of chicken salad, using breast meat from a store bought rotisserie chicken, with diced red onion, green pepper and celery with mayo and a bit of salt and red pepper for seasoning.  Having done so, my body spoke to me.  It said “this chicken salad would be soooo good in a croissant”.   Indeed!
Off I went to “C’est la vie” the French owned and operated bakery/cafe on SRQ’s Main Street.  There I bought two croissants (at $1.70 each).  It was an expensive but well worth while treat. The croissants with their light and flaky pastry positively oozed with butter  -  they were so delicious as a "once in a while indulgence".
2 .  My pals Bill and Patrick went fishing in the Gulf of Mexico yesterday together with Bill’s daughter Katy.  They returned with a good amount of “Red Snapper” – some of which they gave me.

I baked some today with a few mushrooms, with broccolis as a “side”.  ‘Twa…
Post a comment
Read more

February 23, 2012
Ash Wednesday 2012.
I presided and preached at St. Boniface’s 7:30 a.m. service.  Attendance was good -  between 65 and 70 people.
I so much like these early and quiet services. They fit in well with my dally rhythm of life which begins between 4:30 and 5:00 a.m. and ends at about 8:00 p.m.
Wednesday is my Resurrection House day. (Res. House is a day shelter for homeless people here in SRQ).
In my role as Chaplain there I took some ashes with me for the weekly prayer service.
First  I explained the meaning of ashes:
1.They remind us of our mortality “Dust you are and to dust to shall return”.
2.They are a symbol of repentance.  In “older days” those who had offended the community in which they lived and were repentant, would sit in the ashes of the trash fires just outside the village or town.
Second  We said the Lord’s Prayer and the Hail Mary ( our homeless guests are from both Protestant and Catholic backgrounds),
Then  using my thumb I marked the sign of the cross with ashes on the bro…
Post a comment
Read more

February 21, 2012
Ben, Bob and I were chatting last evening before dinner.
I had been telling them about the fabulous string trio which had accompanied the service music at St. Boniface Church on 19th February 2012.
Meanwhile my cats were clamoringfor attention.
Ben asked “how old are they?”
“I am not sure” was my reply, “but I think that they are in their thirties”.
There was a second or two of silence before the “lights went on”.
Then there was a burst of laughter.
Ben had asked me about the cats.
I had responded about the members of the string trio.
=================================
There will be no blog entry tomorrow. I am taking an Ash Wednesday fast  from cyberspace.

Soup: the meal which keeps on giving. Not for children

February 20, 2012
I made a batch of onion, cabbage and tomato soup last week: ‘tis both delicious and nutritious.
Sautee half a large,[ or one small] cut up Spanish or sweet onion, together with one or two chopped cloves of garlic and  a wee drop of olive oil  in a dutch oven or heavy bottomed sauce pan until the onion is transparent.


Add a cup of chicken or vegetable stock.


Then add half a cabbage – diced coarsely, with four or five chopped up plum tomatoes: Season a bit with salt, ground red pepper, (or cumin).


Bring to a boil, and then cover the pan, and simmer for no more than 20 minutes.

So I made this soup forlunch lastweek:  indeed it was enough for four days’ worth of lunch for one person.
After two days I added a bit of   Baba Ganoush which was left over from my cooking class last Thursday, giving the soup a certain “zing”.
By this morning there was still about two cups of this soup yet uneaten.  On the principle of using up all leftovers, I added some more - in this case a bit …
Post a comment
Read more 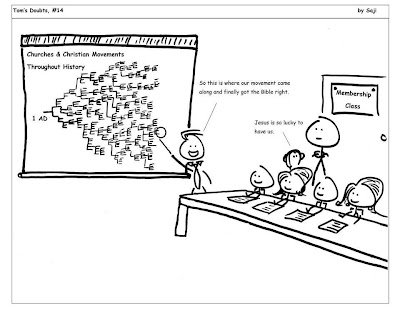 This cartoon reminded me of life amongst the “Plymouth Brethren” – the Christian group in which I was raised for age 3 to age 26 when I became an Anglican.
Wise old elders in the Plymouth Brethren would sometimes say  “there may be true Christians in the systems  ( P.B.’s referred to denominations as the systems of man), but if they only had the light of God’s Word they would join us”.