What a privilege - to “fill in” when Rectors are on vacation
.
Sunday August 8th will see me “on duty” at all three services at St. Boniface Church on Siesta Key in Sarasota. Both the Rector and the Assistant Rector are away, so I will be presiding and preaching at the 7:45 and 11:15 services, and preaching at 9:00.

On Saturday August 14th and Sunday 15th I’ll be taking services at St. Hilary’s in Fort Myers (one of my favourite parishes).

I’ll have a quieter Sunday on August 22nd - a Sunday on which I can sing in the St. Boniface Choir.

Then on Sundays 29th August and 5th September I’ll be “filling in” at All Angels Church on Longboat Key.

I am grateful for these post retirement opportunities to serve.
Posted by J. Michael Povey at Saturday, August 07, 2010 No comments: Links to this post


About five years ago I was having lunch with a young couple who were members of St. James's.  He, Chris, and she, Trish were a joy and delight. Chris was about to qualify as a Psychologist.

I don't know what made me say it, but I remarked "Chris, I think that you should be a Priest, not a Psychologist".

That got them thinking very deeply.   Chris decided to enter the "Discernment Process" for “would be Priests” in the Diocese of Massachusetts.

Chris and Trish are fluent in Spanish, and had previously worked in South America, so they were delighted to make the move.

In due course the  Diocese of Central Ecuador [part of the Episcopal Church] took on Chris’s "discernment process".

The end result is that Chris will be ordained Priest in the Diocese of Central Ecuador in Quito in early October.


Chris and Trish never forgot that I somehow helped them to get started on this path. They have asked me to be with them for the Ordination.

Even though I hate travel I've decided to take the trip.

I've visited the Continents of Africa, Europe, Asia, and North America, so now it's time for South America. (Quito is 9,000' up in the Andes, so it should be quite the trip).

As I pay for this trip my poor old credit card will be stressed for a few months.

But in the long term I know that I will never regret this decision to travel to Ecuador for the Ordination;   and to enjoy some days with Chris and Trish, and their daughters Clare and Isobel.

Too Tired 2 Blog Today
Posted by J. Michael Povey at Thursday, August 05, 2010 No comments: Links to this post 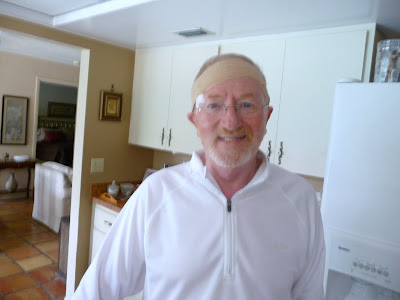 I was in a Clinic for all of three hours.  I have to wear a pressure bandage for 24 hours to resist the chance of bleeding.

By gosh, it looks so cool!

Posted by J. Michael Povey at Wednesday, August 04, 2010 No comments: Links to this post

1. I have a car loan with the Suntrust Bank. I get a letter from that Bank at least twice a year. The letter always offers me a “deal”. They suggest that I might want to skip a monthly payment.

Not so fast! The Bank requires from me a $15 “processing fee”. The fine print tells me that if I pay this $15 I will certainly skip a payment for one month. It also states that my loan will be extended by one month, and that I will be responsible for additional interest.

Enough already! I wrote to the bank today and asked a simple question. “Why”, I asked, “would I want to pay you $15 in order to pay you additional interest?”

Never trust a Bank! Be aware of the trickery of the so-called free market.

2. I will be having very minor surgery on 4th August. It’s called MOHS Surgery and it will remove a very small pre-cancerous “spot” from my face.

The Surgeon is an enthusiast for the free market. She is a savvy business woman who will be more than well paid. (That’s my inference after visiting her fancy-dancy office, in a brand new building)

Medicare (the U.S. Govt. plan for retirees), and a Supplemental Insurance plan (for which I pay) will fork out a small fortune for this.

But they will not pay everything.

In the end, I will be billed for whatever Medicare and my Supplemental Insurance will not pay.

Thus there will be three payers for one simple procedure:

1. Medicare (the Government scheme), paid with a deduction from the Social Security which I earned;
2. “Supplemental” Insurance, for which I pay a premium each month;
3. The balance, which I will be asked to pay “out of pocket”.

American citizens have a triple payer system. The paperwork alone is expensive and mind boggling.

Yet we are told that this is better than the British single payer system which is paid via a payroll tax plus governmental subsidy.

We are told this on the spurious basis that the free market is better than “so-called” socialistic health care. Go figure!
Posted by J. Michael Povey at Tuesday, August 03, 2010 No comments: Links to this post 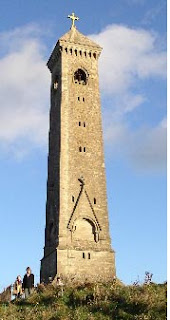 “God’s Bestseller” is the story of  William Tyndale (c1494 – 1536), the translator of the most formative English Bible  (some 85% of Tyndale’s work remains in the Authorised Version (know in the U.S.A. as the “King James Bible”).
The author of  "God's Bestseller" is Brian Moynahan. His book was published by St. Martin’s Press in 2002.
---------------------------------
I grew up in Bristol, U.K.  not very far from the village  North Nibley in Gloucestershire where pious Victorians erected a tower in honour of William Tyndale. (see above)   They thought that he had been born there. In fact he came from nearby Slimbridge.
Not many miles from Slimbridge is the village of Little Sodbury, where Tyndale became a tutor for Sir John Walsh. Walsh’s Manor yet stands.
In a former life I sometimes preached in Tyndale’s Chapel (Baptist) in that little village. (The name “Sodbury” derives from two Anglo-Saxon words: sod - meaning  south, and bury - meaning a camp).
(Those of you will good memories from my blog will remember that I worked for four years in the nearby Town of Chipping Sodbury.  The word “Chipping” denotes a market town).
Tyndale is remembered by pious Christians as the great translator, and as a martyr who was burned at the stake.  He should be so remembered.
What has been lost to pious memory is that Tyndale was a most earthy fellow - capable of inventing new words, and also fluent in what today would be called “gutter language”.
He described Bishops as Bishaps (half man, half mishap). He spoke of popery as “popetrie” i.e. “puppetry”. He described the Bishop of Rochester as a “divininite” (half divinity and half ninny).  He renamed Cardinal Wolsey as “Wolfsee”.
Wolsey died after his physician gave him a purgative. Tyndale called it a “shitten death”.  Tyndale said (English modernized) “that for all the worship of (Wolsey’s) hat and glories of his precious shoes (the distinctive hat and shoes of a Cardinal) when he was pained with the colic of a evil conscience he…..  took himself a medicine et emitteret spiritum per posteriora”  (In other words  he farted out, or shit out his spirit from his backside”.
Before we “tut tut” at Tyndale we should note that the Catholic stalwart, Sir Thomas More could also be earthy and crude.  More said that Martin Luther was “merda, stercus, lutum, coenum” (shit, dung, filth, excrement).  He said that Luther was a drunkard, a liar, and ape and an arsehole whom the Antichrist had vomited into the world.

The information in the above italicised section is derived  from Moynahan's  book.

.
The earthy language of More and Tyndale should help us to remember that modern invective has an ancient provenance.

Posted by J. Michael Povey at Monday, August 02, 2010 No comments: Links to this post

Some silliness via my friend Pam B.

The economy is so bad that.

. I got a pre-declined credit card in the mail.

. I ordered a burger at McDonald's and the kid behind the counter asked, "Can you afford fries with that?"

. A stripper was killed when her audience showered her with rolls of pennies while she danced.

. I saw a Mormon polygamist with only one wife.

. I bought a toaster oven and my free gift with purchase was a bank.

. If the bank returns your check marked "Insufficient Funds," you call them and ask if they meant you or them.

. Parents in Beverly Hills fired their nannies and learned their children's names.

. My cousin had an exorcism but couldn't afford to pay for it, and they re-possessed her!

. A truckload of Americans was caught sneaking into Mexico .

. When Bill and Hillary travel together, they now share a room.

. Congress says they are looking into this Bernard Madoff scandal. Oh Great! The guy who made $50 Billion disappear is being investigated by the people who made $1.5 trillion disappear!
Posted by J. Michael Povey at Sunday, August 01, 2010 No comments: Links to this post